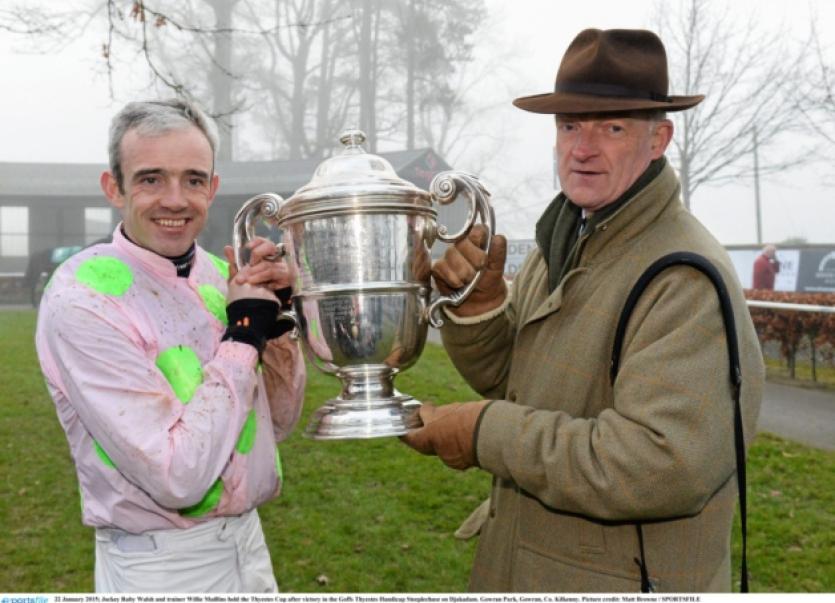 Willie Mullins added another entry to horse-racing’s history books when he became the most successful Thyestes Chase trainer of all time.

Willie Mullins added another entry to horse-racing’s history books when he became the most successful Thyestes Chase trainer of all time.

Mullins, equal with the late Tom Dreaper on five wins, notched up a record sixth success when Djakadam recorded an impressive victory at a foggy Gowran Park on Thursday.

Having failed to sparkle on his seasonal debut in the Hennessy at Newbury, the six-year-old was put away with this race in mind.

However, there were a couple of others who had similar intentions notably Gallant Oscar, who had not run over fences since falling in the Irish Grand National in an effort to preserve his handicap mark.

Punters took the hint seriously and waded in to send the Tony Martin-trained runner off a warm favourite with Djakadam drifting out as far as 5/1 and 9/2.

Given a confident ride by Ruby Walsh, the Saint Des Saints gelding travelled smoothly and was right on the premises going to the third last fence.

It was just after this that the race was put to bed. Djakadam upped the ante, leaving everything else in the field to struggle. Although The Job is Right was in close proximity when unshipping Mark Enright at the final fence second place was going to be his lot.

Djakadam was in complete control by then and had little difficulty in beating Mr Murphy by eight lengths, with Goonyella a further 19 lengths back in third place just ahead of the favourite.

Speaking after his charge’s high class display, Mullins revealed that he had always considered Djakadam as a Gold Cup horse who, in spite of shouldering top weight, travelled and jumped well.

The fact that he is only six would suggest that he is still on the upgrade, but on this evidence he is well entitled to take his chance in the blue riband at the Cotswolds.

This was the middle leg of a three-timer for the trainer which began when Dicosimo was a workmanlike winner of the four-year-old hurdle.

An odds-on favourite, the French-bred dictated the pace at a steady gallop. Although not exactly foot perfect, Dicosimo found too much for the Charles O’Brien runner Prussian Eagle from the second last flight to land the spoils by seven and a half lengths.

Described by Mullins as a horse that will jump and gallop all day, Dicosimo will now be aimed at the Triumph Hurdle. However, he will have to show a good deal of improvement if he is to figure among the principals.

Stone Hard completed the Mullins hat-trick when he turned the bumper into a procession and booked his place in the line-up for the Cheltenham Champion Bumper.

Despite giving plenty of weight away to his rivals, Stone Hard was still an odds-on favourite. He never gave those brave enough to trade at the cramped odds a moment’s worry as he came out of the mist still cantering and drew right to beat Shady Rondo by 14 lengths. It will be interesting to see where he figures in the pecking order for the stable come mid-March.

Bryan Cooper has picked the wrong one in his capacity as first jockey to the powerful Gigginstown House Stud on a few occasions this season, but he was seen at his brilliant best when getting Dedigout home by a whisker in the three mile Grade Two Galmoy Hurdle.

A horse of immense promise, Dedigout suffered a knee injury a few seasons back and spent a year on the sidelines, but showed on his return at Leopardstown that he could still be a force to be reckoned with. He confirmed that opinion with a hugely game display.

Turning to face the judge it was a two horse race between the Dedigout and Monksland. Although Dedigout lost some ground with a mistake at the second last, he recovered well to battle back and get up right on the line to shade the verdict by a short head.

Winning handler Tony Martin revealed that Cheltenham is not on the radar as it’s a day-to-day job with the winner. He needs testing ground but if he remains in one piece there are still plenty of options open before the season ends.

Henry de Bromhead’s Smashing could well feature in one of the novice chases at Cheltenham after the six-year-old gave a solid performance to take the two mile and two beginners chase.

Making most of the running under Johnny Burke, Smashing could have gone round again as he passed the post in splendid isolation 33 lengths clear of Upsie.

According to connections the winner is a horse that likes a dig in the ground. If Cheltenham fails to materialise then the Flyingbolt Chase at Navan is an alternative.