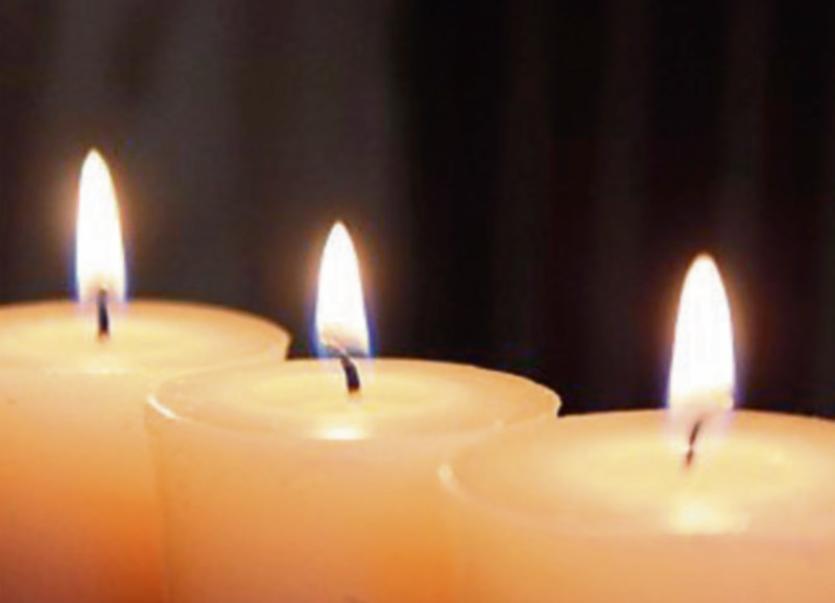 The death has occurred of Eileen Brien, Connolly Square, Main Street, Bray, Wicklow and Ballyragget, Kilkenny on 4th December 2016, peacefully, in the loving care of all the staff of Earlsbrook House Nursing Home, Bray. Wife of the late John Brien. Remembered with love by her nieces Maura and Margaret Phelan and her close circle of friends in Holy Redeemer Parish, Main Street, Bray.

Reposing at Thomas Murphy and Sons Funeral Home, Boghall Road, Bray, on Monday evening, 5th December, from 6pm with evening prayers at 6.45pm. Funeral Mass on Tuesday morning at 10am in The Church of the Most Holy Redeemer, Main Street, Bray, followed by interment in Springfeild Cemetery, Kilarney Road, Bray.

Reposing in Doyle's Funeral Home The Old Rectory, Rosbercon, New Ross, from 4pm , Sunday 4th December, with removal at 7pm to The Church Of The Assumption, Rosbercon. Requiem Mass will take place at 11am on Monday 5th December, with burial afterwards in the adjoining cemetery.

Reposing at her home from 11am on Sunday with Funeral Prayers at 6.30pm followed by Removal to St. Michael's Church, Danesfort. Funeral on Monday after 11am Requiem Mass to the adjoining cemetery.

Died on November 30th, 2016 in Sudbury due to a rapidly advancing brain tumour. In her final weeks she was cared for with great skill and compassion at the Maison Vale Hospice. Married in Dublin in 1969, she will be forever missed by her husband Raymond and by her sons Patrick and Michael. Her loss will be felt by her daughters-in-law Betsy and Mila and her six grandchildren as well as her many friends and family members in Canada, Ireland, Australia and the U.S.A. especially by sister Frances and her cousin Rosemary.

Funeral Mass will take place in the Christ the King Church, 30 Beech Street, Sudbury, Monday, December 5th, 2016 at 10:00 A.M. Cremation at the Park Lawn Crematorium. Donations to the Maison Vale Hospice would be appreciated. Arrangements entrusted to the Jackson and Barnard Funeral Home.

Reposing at her home from 6p.m. on Saturday with Rosary at 9p.m. Funeral Prayers on Sunday at 6.30p.m. followed by Removal to St. Patrick's Church. Funeral on Monday after 11a.m. Requiem Mass to Foulkstown Cemetery.