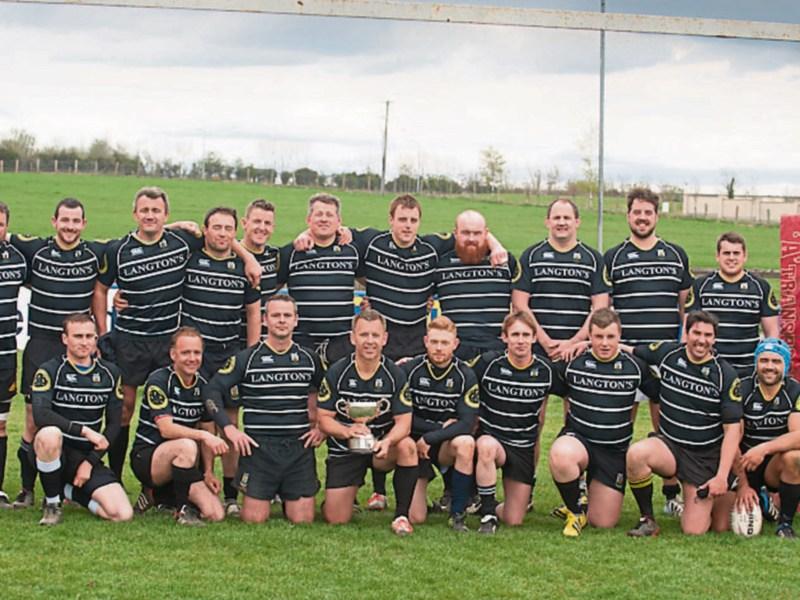 The Kilkenny Rugby Club' J4's (aka Team Fossil) produced an industrious workmanlike performance to record a 16-12 victory over Athboy J2's in the Dunne Cup Final in sunny Athy RFC recently.

Considering that 10 of the starting team were over the age of 40, this was a fantastic achievement. The age range for the team is between 18-47. The geriatric unit of St Luke's hospital was bypassed to avail of some liquid refreshment from the Cup and after a few hours you would have thought that the 'Auld Lads' had drank from the fountain of youth with some of the moves that were on display in a local watering hole, as they reminisced on the day and decades past!

From a high hanging kick off Glen Tector set out the standard for the game. As soon as the catchers feet hit the ground Glen hit him with a thunderous tackle which was hugely appreciated by his teammates. Team Fossil, being captained by the over experienced Ivor O'Brien, were on the defensive from the off. Playing against the wind in the first half Kilkenny struggled to get into their opponents half. Athboy had a game plan of pinning Kilkenny deep in their own half and tried to put pressure on them. The first ten minutes Kilkenny defended superbly and forced Athboy to kick 2 penalties from distance, both were off target.

From a Kilkenny defensive scrum on the 5 metre line, Barry Daly was sitting back in the pocket ready to relieve the pressure with a kick to touch but from a solid scrum, No 9 Alex Walsh chose to hit Johnny McGuinness to take it up the centre. Johnny bumped the first defender and handed of the 2nd and on half way he found Full Back Joe Manuel in support. Joe took the pass in full flight and weaved his way to the try line to put KK 5-0 up. A superb score which gave Kilkenny a real boost and sent the crowd wild. The conversion was not successful.

Athboy weren't giving up and with a culmination of their power play and Team Fossil's indiscipline they scored a quick penalty in reply. At this stage Kilkenny where finding it hard to get their hands on the ball and this period of constant indiscipline, resulted in Ivor o Brien being sent to the sin bin for 10 minutes.

Athboy took full advantage and with further attacks into the Kilkenny 22 Athboy struck to more penalties to go in 9-5 at half time.

There might have been a bigger gap in the scoreline only for a superb try saving tackle by Joe Manuel a meter from the line.

There was an air of confidence in the huddle at half time. Experience players spoke (when they caught their breath) and a winning formula was drawn up. The players knew that experience alone would not bring the cup home to Foulkstown, actions and sticking to the game plan would.

A long deep kick into the Athboy 22 by Outhalf Barry Daly led to Kilkenny’s 2nd try. The Kilkenny lineout was struggling to function due to very good pressure from Athboy jumpers but the Kilkenny pack decided to give Athboy a taste of their own medicine by contesting the throw.

Under the pressure the Athboy jumper slapped the ball back and with that Captain Fossil, fresh from his forced 10 min break in the 1st half, was onto the breaking ball in a flash and thundered over the line for a try putting Kilkenny 10-9 up after 45 minutes.

There was a stalemate in proceedings for the next 15 minutes. With both teams looking for the vital score and with KK players trying to force everything. Athboy did strike first.

From a scrum out wide on the 22 the Athboy centre found his way twoards for the try line but a thunderous try saving tackle by Alex Walsh, kept them out. From the ensuing phases Kilkenny were deemed offside in front of the posts and Athboy were awarded a penalty.

Kilkenny decided that it was now or never and had to play “keep ball” rugby and force errors from the opposition. Great ball carries from James Fennelly, Eddie Brennan and Ronan Blanchfield got the phases going and put Athboy under pressure. Penalties started to come and the fossils started to win territory. Kilkenny pinned Athboy deep into their own half and kept up the pressure. When they tried to run it out of the red zone, an Athboy player got isolated and a penalty was awarded. Barry Daly stepped up and made it 13-12 after 74 min. Cool heads and all the experience generated over the years were called on. Win the drop off and pin them back again. A testing drop off was gathered and the ball cleared down the pitch. From an Athboy transgression Kilkenny were awarded a penalty inside their 10 metre line. Barry Daly stepped up and made it 16-12. Huge celebrations started on the final whistle with family and friends coming onto the pitch to share the moment . I've no doubt a few wives whispered into their husbands ears and said ' well done, but no more'.

Captain Ivor O'Brien on receiving the cup, thanked all for travelling and to Clubman of the year '14/'15 Dave Matthews for putting the team together. Without him there would be no Team Fossil. Ivor also thanked Pakie Henebry and Vincent O' Shea.