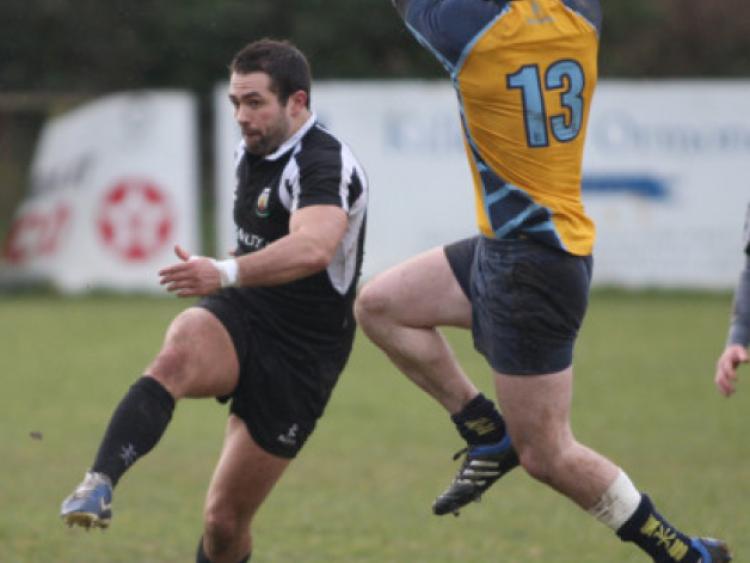 Kilkenny Firsts powered through to the quarter-finals of the Provincial Towns Cup by scoring a good win over Division 1A counterparts, Clondalkin in Foulkstown on Sunday (17-7), writes Padraic Treacy.

Kilkenny Firsts powered through to the quarter-finals of the Provincial Towns Cup by scoring a good win over Division 1A counterparts, Clondalkin in Foulkstown on Sunday (17-7), writes Padraic Treacy.

A huge crowd turned out and they were treated to an exciting and tense contest between two giants of junior rugby.

Kilkenny turned in a display of sheer determination to score a thoroughly deserved victory.

In the opening half the two teams were like stubborn mountains goats that locked horns with each refusing to concede an inch to the other. Kilkenny were on home turf and were not about to allow their Dublin visitors to rule the roost.

Both teams kept things tight in the opening quarter. Kilkenny did have a number of chances to open the scoring but a mixture of nervousness and indecisiveness led to the chances evaporating into the wet and windy air.

However, with just over 30 minutes played Kilkenny handed their opponents the first scoring chance when they were penalised just outside their 22.

Clondalkin’s kicker and full-back, Chris Jebb stepped up to add an additional three points to his huge tally this season, but nerves and the occasion got the better of him. His kick went wide, much to the relief of the home supporters.

This escape energise his team mates who hit back at Kilkenny from the restart. With only a few more minutes elapsed they spotted a crack in the usually solid Kilkenny defence and their prop Chris Moloney slid in under the posts to open their account. In the driving rain Jebb added the conversion with relative ease. The game was on!

Kilkenny regrouped, and with the battle lines drawn, they increased the level of physicality. With this increase they soon found themselves in their opponents 22 where they set up camp for the remainder of the half.

They battered the Clondalkin defensive lines repeatedly and Victor Ryan managed to cross the try-line but the referee blew his whistle and awarded Kilkenny a penalty instead. Kilkenny opted for a scrum and drove at the line with No.8 David O’Connor controlling the ball superbly with his feet at the back of the scrum.

Like an unleashed lion he sprang when the time was right and off-loaded to his back-row companion, John McGuinness, who used his immense strength to drive over the line and get the touch down. Hampered by his recurring ankle injury, kicker Willie Wright’s conversion kick found the direction but lacked the pace and height to cross the bar.

Nevertheless, this was a vital score as the half time whistle blew with Kilkenny trailing 5-7.

Having discussed at the break the areas of possible weakness that needed to be addressed, Kilkenny appeared for the second half a fresh and invigorated team. They upped the intensity from the kick-off. They forced Clondalkin to make errors and with nine minutes gone, Willie Wright was given the opportunity to put Kilkenny in front.

However, his injury prevented him from doing so and his attempt went just wide. Kilkenny kept up the pressure and their reward came in the 55th minute when centre Daz O’Brien crossed the line in the corner for a second try. The kicking duties were handed over to O’Brien, but the angle was too great and his conversion attempt drifted across the face of the goal.

O’Brien had a further two kicking chances, but they were also off target.

Kilkenny controlled the game from here on in and denied their opponents any scoring opportunities. In the 76th minute David O’Connor sealed the deal for Kilkenny with an impressive try which saw him use his immense strength and skill to charge over the line. O’Brien added the conversion.

Despite a late and nerve-wracking flurry from Clondalkin, proceedings came to a close to the delight of the Kilkenny fans.

Despite the recent severe weather the pitch was in excellent condition, which was attributable to the great work put in by the grounds staff in the club. However, the weather on the day did not permit fast-flowing rugby which would suit Kilkenny’s backline better.

The cruel crosswind denied the kickers any real chance of points and the greasy ball accounted for a lot of ball knocked forward. Nevertheless, Kilkenny stuck to their game plan and the physicality of the pack allowed them to out-muscle their opponents and achieve the platform they needed to pull off this vital win.

No. 8, David O’Connor, flanker John Phelan and scrum-half Robbie Walsh, performed excellently throughout as did the whole squad given the dismal weather conditions.

The draw for the quarter-finals was held in the clubhouse after the game. Kilkenny hoped for a home advantage and that is exactly what they got which added to the celebrations in the clubhouse.

Kilkenny will host Newbridge in the quarter-finals in Foulkstown on Sunday, March 16 (3pm). The other games pulled out of the hat by Club President Ed Donohue and former Munster and Ireland legend, Mick Galwey - to be held on the same date - are Tullamore v Wicklow; Enniscorthy v Dundalk and Ashbourne v the winners of Midlands Warriors/Cill Dara, a game called off due to water-logged pitches.

Kilkenny are now in a good position to drive on towards Towns Cup glory. Newbridge narrowly beat Co. Carlow on Sunday (13-10).

Of course, memories of the last encounter between the teams are still fresh in the minds of Kilkenny followers. Three years ago Newbridge knocked Kilkenny out of the cup through a try scored by Kilkenny’s own Podge Mahon, who played for the Co. Kildare club at that time.

Here’s hoping Podge can replicate that try scoring effort, this time in a Kilkenny jersey.

The club thanked supporters who came out in their droves to support the team. It was great to see so many old faces again in the club and reminisce on some of the past glories of the club.