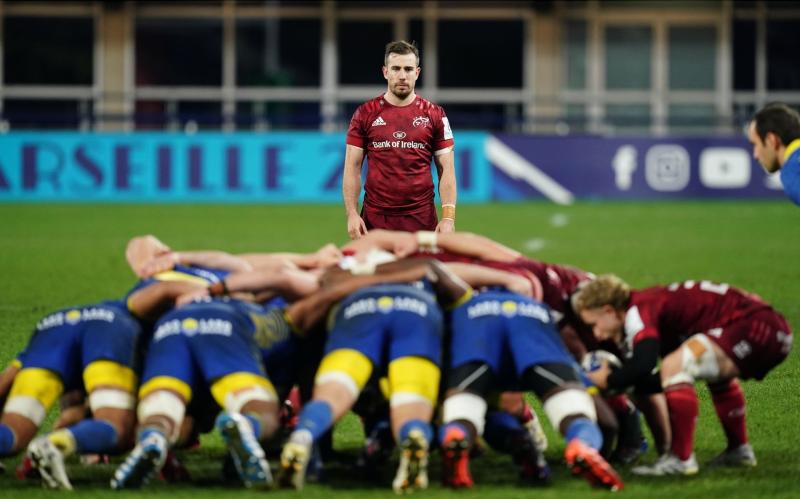 Reports in France are this evening linking JJ Hanrahan with a move to Clermont. The Top14 side are believed to have signed the former UL Bohemian and Rockwell star on a two year deal.

The Kerry native has played 150 games for Munster, adding 803 points to his name in two spells with the province. The former Northampton Saint is to battle for the number 10 jersey at Clermont with French international Camille Lopez.

Hanrahan was also believed to be in talks with Biarritz and the Western Force in Australia. But the 10 has chosen to sign up with the 'Yellow Submarine' side, who are currently without a head coach.

The move is the first of the Munster 'contract expiring' experienced trio to confirm the next departure. Fans of the men in red are still waiting on contract news surrounding prop James Cronin and winger Darren Sweetnam, who are also set to leave this summer.

Former Ireland Schools and U20s international Hanrahan completed two years with the Munster Rugby Academy before securing a development contract for the 2012/13 season.

As an academy member he first played for the Munster senior side against La Rochelle in the opening pre-season game in August 2011.

In June 2012 he played an impressive role at out-half for the Ireland Under 20 side that finished 5th in the Junior World Cup in South Africa and was nominated for Junior Player of the Year.

He then made his PRO12 debut against Newport Gwent Dragons in Thomond Park in September 2012, and as the youngest member of the squad was named in Munster's 38 man Heineken Cup squad for the season, going on to make his Cup debut as a replacement against Edinburgh in October at Thomond Park.

Made the move to a full senior contract at the start of the 2013/14 season for two seasons.

Hanrahan was part of the Munster A team that won the British and Irish Cup title in May 2012.

He opened the 2013/14 season with man of the match performances against Zebre and Glasgow Warriors, and also scored a crucial try late-on away to Perpignan in the Heineken Cup to win the game for Munster.

Kicked 10 out of 10 as Munster had their biggest win of the season in February '14 as Cardiff Blues were dispatched on a 54-13 scoreline.

Named Young Player of the Year at the 2014 Munster Rugby Awards.

Winner of the Golden Boot Award at the 2014 PRO12 Awards. The minimum criteria are 20 attempts at goal and an 88.71% success rate secured Hanrahan the award for the 2013/14 league.

Made the move to Northampton Saints in the summer of 2015 for two seasons where he made over 30 appearances for the Premiership outfit.

Returned to begin a two-year contract with the province in June 2017.

Missed the early stages of the 2017/18 campaign with a shoulder injury before making his 'second debut' off the bench against Cardiff on September 30 and made 20 appearances that season.

Signed a two-year contract extension in early December 2018, committing to the province until at least June 2021. Led Munster to a Champions Cup victory over Castres at Thomond Park with a Man of the Match performance in his first European start at out-half for the province later that month.

Marked his 100th Munster appearance with a Man of the Match performance in the win over Benetton in April 2019 and kicked the winning halfway line penalty against the same opponents in the Guinness PRO14 quarter-final.