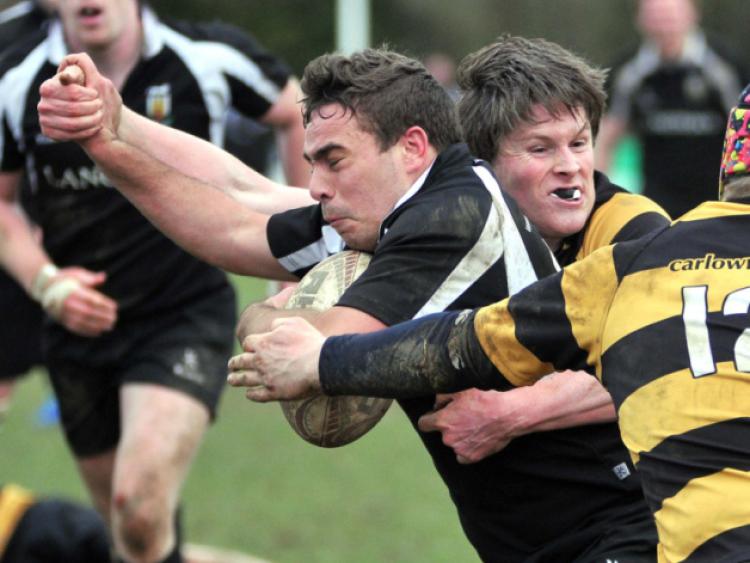 Things get better and better for Kilkenny rugby. Last week a victory secured their place at the summit in the Leinster League, writes Pat Henebry.

Things get better and better for Kilkenny rugby. Last week a victory secured their place at the summit in the Leinster League, writes Pat Henebry.

At Foulkstown on Sunday there was additional good cheer when the high flying Firsts sent Carlow packing in an action packed first round tie in the Provincial Towns Cup.

This was a sparks flying affair in terms of scores. The action was up and down, with Kilkenny on top in the first half and Carlow dominant afterwards.

The game produced no less than 11 tries and the large crowds certainly got value for money.

The teams played each other twice already this season in the Leinster League. Kilkenny came out on top twice, so they were favoured to complete the hat trick.

Carlow had other ideas and coach Padraig Brennan had them primed and ready to take the game to the opposition. Things went right down to the wire.

Brennan, a former winner as a player with Carlow in the ’Cup, used his vast knowledge well. Carlow could have snatched victory.

Kilkenny showed eight changes from the previous week’s crucial win over Gorey. Injuries took a huge toll on the home side, but the replacements paid their way.

The Cats hit the ground at a rate of knots and they were 26 points up after 25 minutes with tries from Nyenhuis, O’Brien, Cuddihy and Robbie Walshe. Rory McInerney converted three of those to leave Carlow stunned.

The visitors then sprung to life. They scored a try straight from the restart on 26 minutes, which help them drag their game together.

Normal service resumed four minutes later when Robbie Walshe scored his second try. McInerney converted. When Podge Mahon crossed the line in the 35th minute it looked all over for the Carlow men.

McInerney converted the kick and Kilkenny were looking all the way the favourites they were pre-game. The forwards and backs were playing fantastic, high quality running rugby that had the visitors on the backfoot for most of the half.

However, right on the stroke of half time the visitors scored their second try. A missed tackle on the Carlow winger saw him coast over the line for the touchdown, which was converted.

The Carlowmen had a mountain to climb, late score or not. Whatever their coach said to the players during the break, it lifted them no end.

On 45 minutes they registered another seven points after demolishing the Kilkenny scrum. It was game on, again.

Kilkenny looked like a different team. The unity of purpose had evaporated. Their inability to hold on to the ball, and the concession of penalties, hurt their cause and allowed Carlow make serious gains.

On 62 minutes Kilkenny conceded again. Carlow crossed the line again in the corner after sustained pressure from their pack. The Carlow out-half missed the conversion.

The only time during this half that Kilkenny entered their opponents half of the pitch was when they kicked the ball off to restart the game. Carlow drove at them like a train at every opportunity.

In the last quarter Carlow crossed the Kilkenny line three times, only to see the ball held up by a dogged defence. Then on 80 minutes Carlow scored their fifth try, this time under the posts. This was converted to leave seven points between the sides.

There was no injury time added on by the referees. When he blew for full time after the conversion, Kilkenny breathed a huge sigh of relief.

More time in the game would surely have suited Carlow as the hosts were under huge pressure, and were out on their feet.

Anyway, Kilkenny lived to fight another day in the Cup. Carlow now play in the Plate competition.

Kilkenny coach, Steve Ashmore, had some stern words for his players at full time and pointed out that a complacent second half performance like this one would eventually hurt them in the Cup.

The draw for the next round was kind to Kilkenny. They got a home draw against New Ross.

There will be a welcome break from do-or-die competition on Sunday when the action will resume in the Leinster League. The First and Second teams travel to Wicklow in what are vital games in the push for promotion.