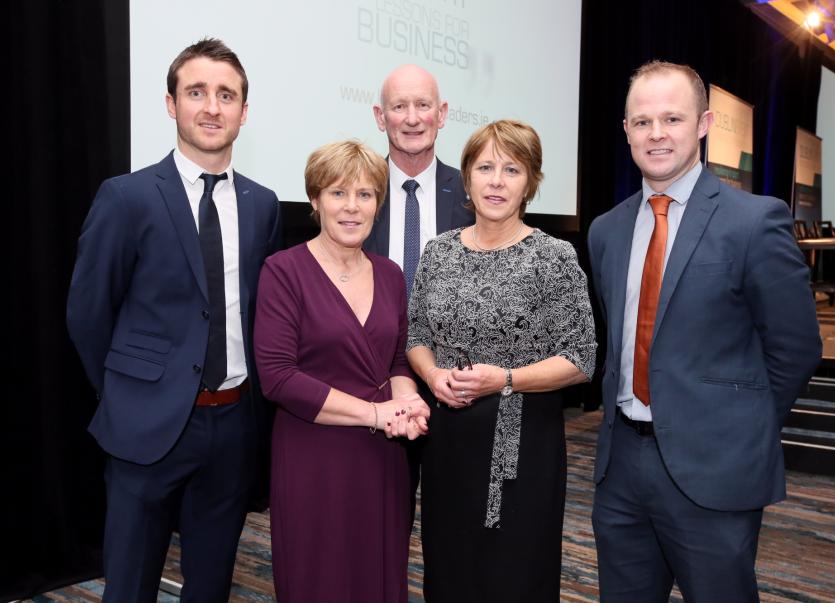 At the ‘Resilience in Sport, Lessons for Business’ talk last week in Dublin were David Herritty, Angela and Ann Downey, Brian Cody and Tommy Walsh

Ireland’s finest leaders in sports and business assembled in Dublin’s Clayton Hotel, Burlington Road, last Thursday January 18th. The ‘Resilience in Sport, Lessons for Business’ networking event centred on the inherent values that are integral to both business and sport.

The event was hosted by Pat Kenny who led conversations with Kilkenny manager Brian Cody, Dublin manager Jim Gavin, Taxback’s Terry Clune and racehorse trainer Jim Bolger about their experiences in the rise to the top of their respective fields.

Insights were shared on the values, focus, passions, attention to detail and drive, which are necessary for success, in both fields.

Dublin Camoige Manager David Herity, Kilkenny hurler Tommy Walsh and Kilkenny Senior Camoige Managers Ann Downey and Angela Downey joined in a panel discussion to discuss ‘What Drives Success’. In conversation with Pat Kenny, they spoke about how teams and managers create an intimate bond in the pursuit of objectives.
“Everything learned in sport, can be applied to both business and life. That was the essence of this event. The calibre of speakers who lined up was second to none and they reflect the talent and successes of Irish people in sports and business, two sectors for which we are known the world over.” Says Rev. Dr Dermot Ryan, President at St. Kieran’s College.
As Ireland’s most successful hurling manager in the modern sporting era Brian Cody delivered a talk on ‘Principled Leadership’. Having recently been confirmed for an unprecedented 20th season as Kilkenny Manager, he explored the leadership skills that have made Kilkenny the competitive and resilient force they are known for He also touched on what it takes to have a team work with relentless drive, pure passion, ceaseless commitment and the uncompromising selflessness needed to succeed.
It is the second year for the event to take place and was once again supported by Newstalk, Morgan McKinley and Taxback.
All funds raised will go towards creating a National Centre of Excellence for Hurling at St Kieran’s College in Kilkenny, one of the country’s oldest second level colleges for its sporting successes and academic achievements. Funds will also go towards assisting with the development the game throughout the county..