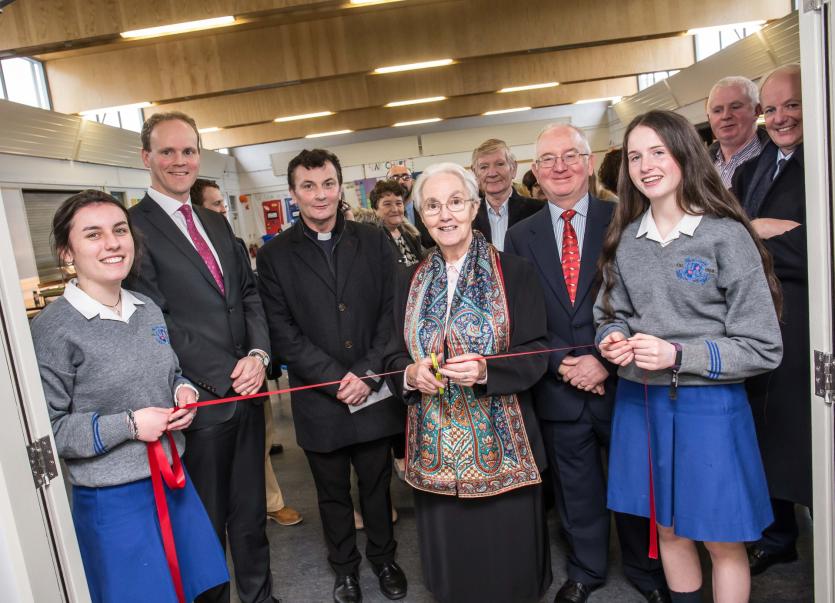 At the opening of the new extensions at Loreto were pupils and staff, including principal Colm Keher, Fr Roderick Whearty, Sr Carmel Gallagher, and Tony Joyce, Board of Management

A number of new extensions have been opened at local secondary school, Loreto Kilkenny.

The first area to be opened was the new special needs unit to be known as ‘Ionad Saoirse’. It was blessed by Rev Fr Roderick Whearty, and the event was attended by invited guests including parents, pupils and members of the Board of Management.

The next area to be opened and blessed was the multi-purpose hall, the ‘Hughes Hall’. It is a significant space which can be used as a canteen extension, study and examination hall, assembly hall and space for other events. A new library area was also officially opened and blessed.

Class teacher Ciara McDonald thanked all who helped out with setting up the class and paid a warm tribute to the Learning Support department in the school for their work in promoting a culture that valued all learning needs.

The Hughes Hall is named after the first Mother Superior of the Loreto Convent, MM Patricia Hughes. This space will accommodate students at lunch-time, for examinations and study, while also being an impressive venue for assemblies and functions.

Chairperson of the Loreto Board of Management Tony Joyce paid tribute to all who contributed to these developments. Given that the project was financed solely by the school, Mr Joyce said all were grateful for the contributions of the parents and the Parents Association.