Castlecomer to bee a wildflower oasis! 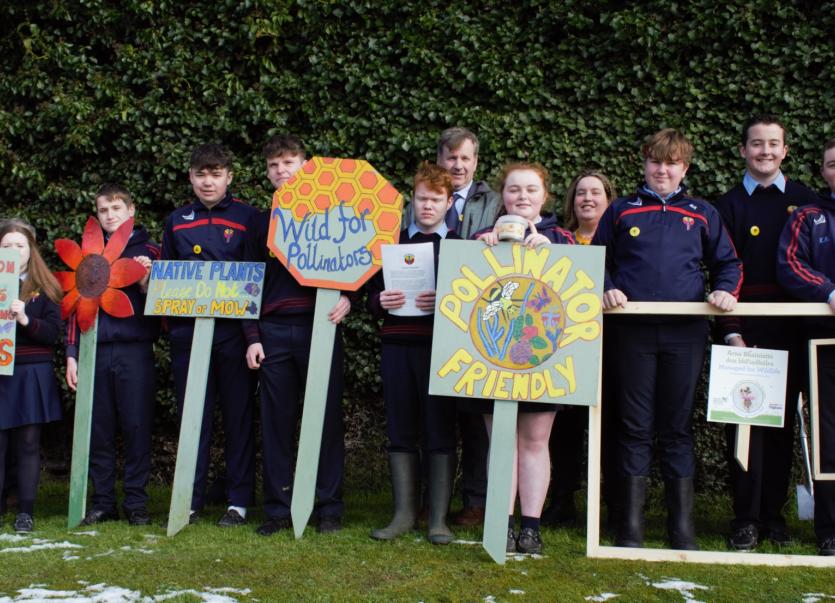 Transition Year students from Castlecomer Community School joined forces with local community groups with the aim of making Castlecomer a Wild Flower Oasis.
“As we are all aware there has been a dramatic and dangerous decline in our insect, bee and bird population over the last two decades,” said Transition Year (TY) student Toby Marnell, speaking at the launch last week.
“Our native wild-flower species are also under threat - no-one wants to see this happen,” he added.
The TY students of Castlecomer CS have come up with a cross community project that will do far more than raise awareness, but can also help to turn the tide in a very practical way.
“We are proposing to make Castlecomer a Wild Flower Oasis,” he added.
“It is envisioned that in the coming years urban areas can become an important habitat for some of our endangered species of wild-flower, honey bees and insects.
“ This can be done by creating wild flower corridors in urban areas and will involve students, with the help of community groups and the general public, knocking on doors and asking people can we sow one or two square metres of their garden with self-maintaining, perennial wild flowers. We will be asking local business and local authorities to help us with the same.
“We hope Castlecomer will be the first town in Ireland to make this a reality and that other towns and cities will follow.
“There and hundreds of thousands of acres of urban/semi urban land in Ireland that could easily accommodate wild flower patches, which could turn into bee corridors, which could make a real and significant difference to our declining bee, insect and wild flower populations.
“This is a real possibility,” he continued. “Who wouldn't want to live in a town full of flowers”
The students’ idea has already drawn great praise.
“I think this is a brilliant idea,” said Seamus O'Connor, principal of Castlecomer CS. “The school management is fully behind it.”
Also in attendance at the launch was Mags Morrissey, Kilkenny Leadership Project, who commended the students for their efforts.
“I think it is very positive moving forward that this generation are interested and pro-active in wanting to make their environment a better place,” she said. “Projects like this can also help to raise the profile of towns like Castlecomer, so we would be very supportive of this initiative,” she said.
The project also drew praise for helping to promote Castlecomer in a positive light.
“Castlecomer is an ideal location for such a venture,” said Nicola Salmon of the Castlecomer Discovery Park.
“With the Discovery Park already being a haven for biodiversity, we are delighted to be teaming up with the Castlecomer CS students. We admire their ambition.”
The launch was also attended by Claire Wilson of Deenview, Dick Brennan of the Tidy towns Committee and Patty Owens of The Castlecomer Enterprise Centre.
“I am delighted to see these students taking such an interest in their environment in a project that could really benefit Castlecomer,” said Ms Owens. “If we took more care of our bee and insect population it would bee a better world,” added Mr Brennan.