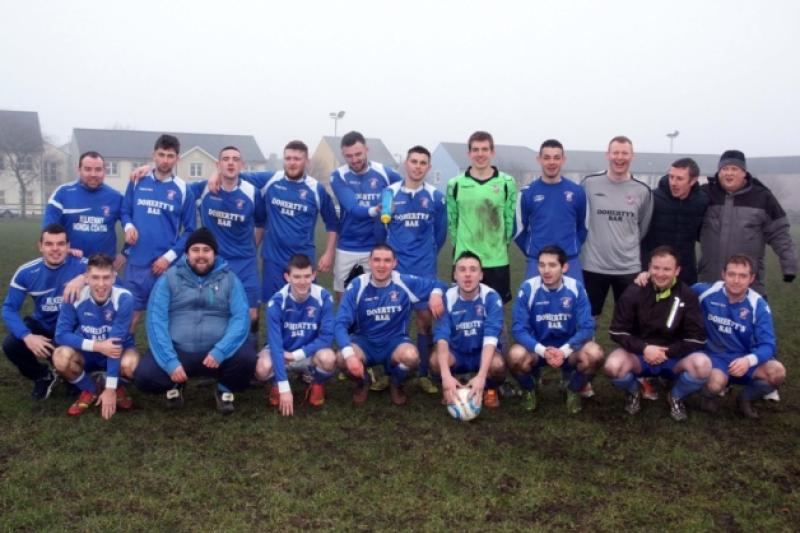 Thomastown United and Newpark may have been battling for honours at the top of the Premier Division, but things were just as keenly fought at the other end on Sunday.

Thomastown United and Newpark may have been battling for honours at the top of the Premier Division, but things were just as keenly fought at the other end on Sunday.

It wasn’t the best of days for either of the teams involved in the basement battle, as both Spa United and Bridge United A saw their survival hopes suffer.

Spa must be cursing their luck against city sides, as Freebooters A handed them another defeat on Sunday. Of the four league games they’ve played in 2015, they’ve lost to Evergreen A (0-4), Newpark A (0-5) and now ’Booters.

Jason Hennessy (2) and Paul O’Brien got the Blues on their way in the first half, before Ger Hayes and Jamie Lynch wrapped up the scoring for the hosts, who made a welcome return to winning ways in spite of a bad run of injuries.

“We’ve used a lot of young players, but it’s been forced on us,” said Blues boss Anthony Hanney. “We’ve been down between seven and nine players for our games, missing the likes of Damien Raggett, Dessie and John Hayes, but as we don’t have a game next week hopefully we’ll in a position to get these lads back.”

The result means Spa are second from bottom, three points better off than Evergreen A, but they’ve played five games more. Bridge United A are on the same number of points, but couldn’t build on their 3-2 win over Freebooters A as they crashed to a 2-1 loss to the Lions in Durrow.

In a lively game (both sides finished with ten men) it was honours even after the first half. Michael Freeman and Martin Bambrick getting the goals, before Gary Butler’s second half strike made sure the points stayed with the Lions who are now third in the table.

Freshford Town got their Division One title charge back on track with a stirring win in Ballyragget.

Things looked grim for the league leaders when they found themselves two goals - and a man - down midway through the first half against Brookville, but they made an incredible recovery to take a seven-point lead at the top of the table.

A slight stutter in their campaign - three draws from their last four games - has allowed other sides to get closer to Freshford, but Sunday’s win means they are within reach of back-to-back promotions and top flight football.

The comeback began when Paul Guinan cracked home a free-kick in the dying seconds of the first half. Town were revitalized by that goal, even more so when Ger Doheny’s header made it 2-2 in the second half. The transformation was complete when, ten minutes from time, Stephen Mahony headed home the all-important fifth goal.

“That was probably one of our biggest results from the last few years for a number of reasons,” a delighted Freshford boss James Farrell told the ’People. “Firstly, we were missing a number of players through injury - Willie Cuddihy, Paddy Nolan, Liam Hickey, Jason Stanley, Eoghan Vaughan, Philip Russell and David Lynch all missed Sunday’s game - as well as the fact we’d drawn a number of games recently.”

With three games left to play Freshford have a seven-point lead on the chasing pack of Stoneyford, Thomastown United B and Fort Rangers, meaning promotion is within their grasp.

“One more win means the other teams can’t afford to slip up,” said Farrell. “Two more should be enough to see us there.”

Thomastown United B missed the chance to make the gap a little tighter when they went down 3-0 away to Clover United A. Kieran Bowe, Ray Bowe and Mark Treacy all hit the net to ensure Clover’s fifth win of the season, but it may not be enough to help force them into the chasing pack.

Fort Rangers, however, are right in the mix. Emmet (2) and Eddie Nugent saw to that as they hit the target to see off Newpark B on a 3-1 scoreline.

There was only one game in Division Two, but it proved to be very important.

Freebooters B finally confirmed what many had tipped throughout the season as they scored the win that sealed the league title.

The long-time leaders finally got their hands on the title when Ger Hayes netted the only goal in their 1-0 win over Deen Celtic on the Fair Green. The result means the Blues have captured the spoils with two games to spare. They’ve done it in impressive fashion too, winning 10 of their 12 games and drawing two.

The result marks a welcome return to successful days for the second-string side. Not so long ago they were competing against their club-mates in the Premier Division, but recent relegations have seem them drop to the third tier.

Mind you, they aren’t finished yet. The club are looking to echo Freshford Town’s exploits from last season and end their campaign with a league and cup double!