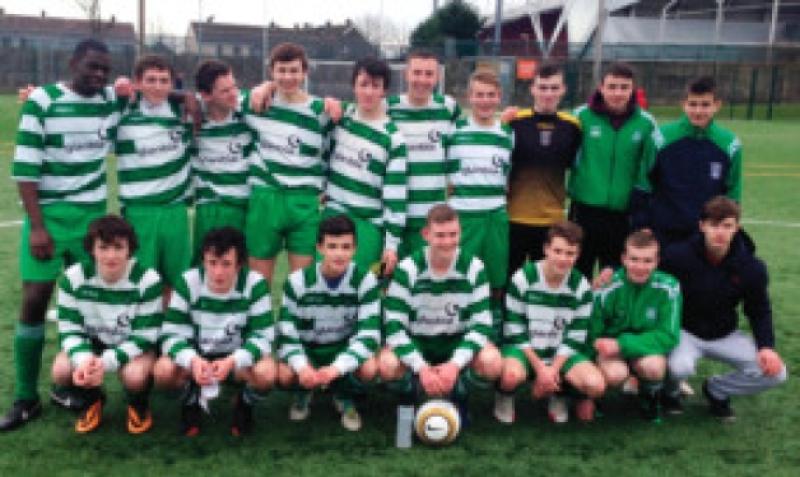 Third time proved to be a charm as Evergreen advanced to the quarter-finals of the FAI Youths’ Cup.

Third time proved to be a charm as Evergreen advanced to the quarter-finals of the FAI Youths’ Cup.

Having lost at the last 16 stage for the past two seasons, the ’Greens made the last eight thanks a sparkling win over Limerick’s Ballynanty Rovers.

Played on the all-weather pitch at the Limerick Institute of Technology, both teams set a high tempo from the off. It was Evergreen who created the first decent chance when midfielder Eoin McGovern profited from some good combination work between Robbie Hennessy and Gaby Lapuste. McGovern broke through Ballynanty’s defence, hitting a low drive that was inches past Kieran Daly’s right post.

Ballynanty were aggressive and direct in this opening period, and began to get on top. They caused the visitors plenty of problems at the back, with Irish international Jamie Bromell profiting from towering centre-forward Lloyd White’s flick-ons.

Bromell was very lively and made two efforts. Goalkeeper Aidan Hynes who made a superb save to stop Bromell’s first effort, then saw the second clear the crossbar. Switching Dylan Drennan into the centre of defence proved a success for Evergreen who began to probe for the counter-attack. The tactic worked, as the pace of Ronan Coffey, Ben Hickey and Jamie Conway caused problems, but the visitors had Hynes to thank when he made an outstanding athletic save from a Bromell free.

The game turned on its head when, in the last 10 minutes of the half, Evergreen stormed in front. Substitute Robbie Buckley gave the visitors the lead, clipping a low shot home from Ben Hickey’s dangerous cross.

Ballynanty were rattled and cracked again five minutes from the interval. Conceding a free on the edge of the box the hosts were punished when Mark Slater stepped up and picked his spot in the net.

Ballynanty responded well, Hynes coming to his side’s rescue with a good save from Liam Brock. From the clearance, Evergreen attacked. Hickey did the damage, playing Conway in behind the Limerick side defence to slip the ball past Daly.

The second half was a much more controlled affair, but even though Evergreen were happy to sit deep they still caused the Limerick side all sorts of problems, Hickey and Conway both smashing shots off the crossbar.

Ballynanty fought back, winning a penalty on the hour but Gary Wyse spurned the chance to pull his side back into the game when he blazed over the bar.

Ballynanty were broken by that miss, and could have fallen even further behind. Darby Fwamba hit the post from Christian Lapuste’s pass before, minutes later, forced Daly into a great stop.

Still hungry for goals Evergreen pressed on, going 4-0 up when Hickey fired home from a goalmouth melee. Ballynanty did pull a goal back thanks to Lloyd White’s superb long range effort, but they couldn’t halt Evergreen’s charge.