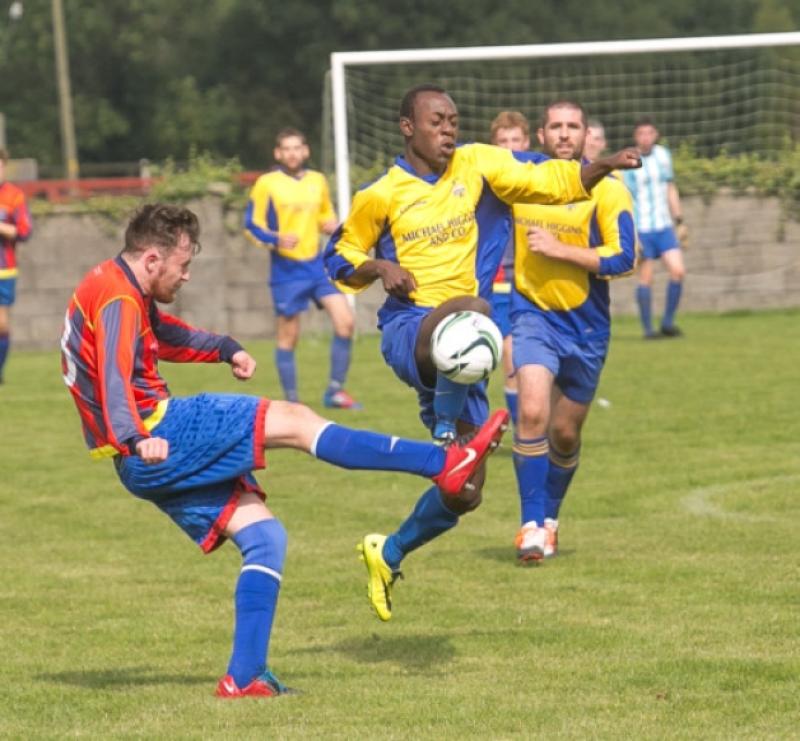 It was a welcome back of sorts for Ormonde Villa, but Michael Brennan was the party-pooper as Bridge United B grabbed a late share of the spoils.

It was a welcome back of sorts for Ormonde Villa, but Michael Brennan was the party-pooper as Bridge United B grabbed a late share of the spoils.

The city side marked their return to the junior game with a fine performance on the opening day of the Division Two season, but were denied the perfect start with Brennan’s injury-time cracker in Goresbridge.

Having taken the lead twice and lost it, United looked to be heading for defeat when Villa sub Nicky Walsh pounced in the 83rd minute. However, the hosts denied their rivals all three points when Brennan controlled Michael Hutchinson’s pass two minutes into stoppage time.

Although he had his back to goal the sub knew where the target was, turning sharply before firing off a fierce drive that found the net via the inside of the left post.

It was a goal which deflated Villa, but they could hold their heads high after giving a solid performance in their first league outing. The club, back in the junior game after spending almost a decade out of it, made a very bright start and showed no signs of nerves as they took the game to a more experienced Bridge side.

It took the visitors just two minutes to make their presence felt. Helped by the creativity of Danny Lenihan - he impressed throughout - and Jamie O’Keeffe a Dylan Walsh pass found Shane Corr, but Zak Shermer made a telling tackle to deny the winger a clean strike.

Inspired by Lenihan and O’Keeffe (as well as the pace of full-backs Paul Denieffe and Jamie Cahill) Villa pressed and pressed for the opening goal, but couldn’t find that telling final ball in the opening quarter. That came back to haunt them as, after weathering the storm, Bridge eased in front.

When Villa switched off for a split-second, Bridge used their guile and pounced. James Dempsey did most of the damage, slicing the opposition wide open with an incisive ball from midfield.

Shane Foley ran on to the delivery, coolly holding off his man before firing high into the top right corner of Michael Gibbons’ net.

Villa were bloodied by that strike, but not unbowed. Within minutes they were back on the attack, Finn Dowling showing skill to control Shane Corr’s pass and turn swiftly.

Racing towards the goal Corr got off a low shot which Joe Kelly did well to stop. The ball spilled loose but, agonisingly for Villa, came back into play behind the inrushing Corr.

The young city side kept pressing, going close again when Lenihan curled a 27th minute free over the wall, but they finally made good on their chances after the half hour. Their patience paid off when, breaking from defence, Lenihan caught Bridge cold with a lengthy diagonal ball.

Sprinting free down the left, Dowling put his head down and ran for goal, pausing only to steer a low shot beyond Kelly’s left hand.

That goal gave Villa great heart, and almost led to another goal. Dowling profited from the hard work of Lenihan and Dylan Walsh, sprinting clean through into the box, but he lashed his 36th minute shot straight at ’keeper Kelly.

Bridge had been under pressure again, but showed they could kick up the pace whenever they wanted. They gave Villa a real fright when James Barcoe came up from the back and got his head to Michael Hutchinson’s 41st minute corner, but a relieved Villa were saved by Denieffe’s goal line clearance.

However, Villa didn’t heed the warning signs. Within 60 seconds they conceded a needless free, and were punished when another teasing Hutchinson delivery was headed home by Foley at the back post.

The goal was a sucker punch for Villa, but worse could have followed. Bridge began the second half in positive fashion, Foley rolling a clever ball into Caomh Breen’s path, but Kieran Banville made a vital block to keep his side in the game.

Stirred into action, Villa began to fight their way back into the game. Shane Corr sent a shot whistling over the bar from the edge of the box before Dylan Walsh went even closer. Picking up play inside his own half Walsh set off on a searing run down the left flank and made his way into the box, but his curling shot flashed beyond the far post.

Villa sensed an equaliser was coming and, ten minutes into the new half, got it when Corr lofted a ball over the Bridge defence. United appealed for an offside but Finn Dowling played on, controlling the ball and tucking it away.

The sides seemed happy to have a point apiece, but the game was far from over. Bridge had some great chances to retake the lead but James Bolger and Shane Foley both saw dangerous headers narrowly clear the Villa crossbar as the game ticked into the final quarter.

Just when Bridge thought they had a point they were caught by a speedy Villa break seven minutes from time.

Dashing on to a long Banville free, sub Peter Vickery used his pace to race down the right flank and drill in a low cross. Joe Kelly did well to stop it, but couldn’t prevent Nicky Walsh from sweeping home the rebound.

It looked like that goal would finally settle Sunday morning’s entertaining decider - but Michael Brennan made sure Bridge weren’t done yet.