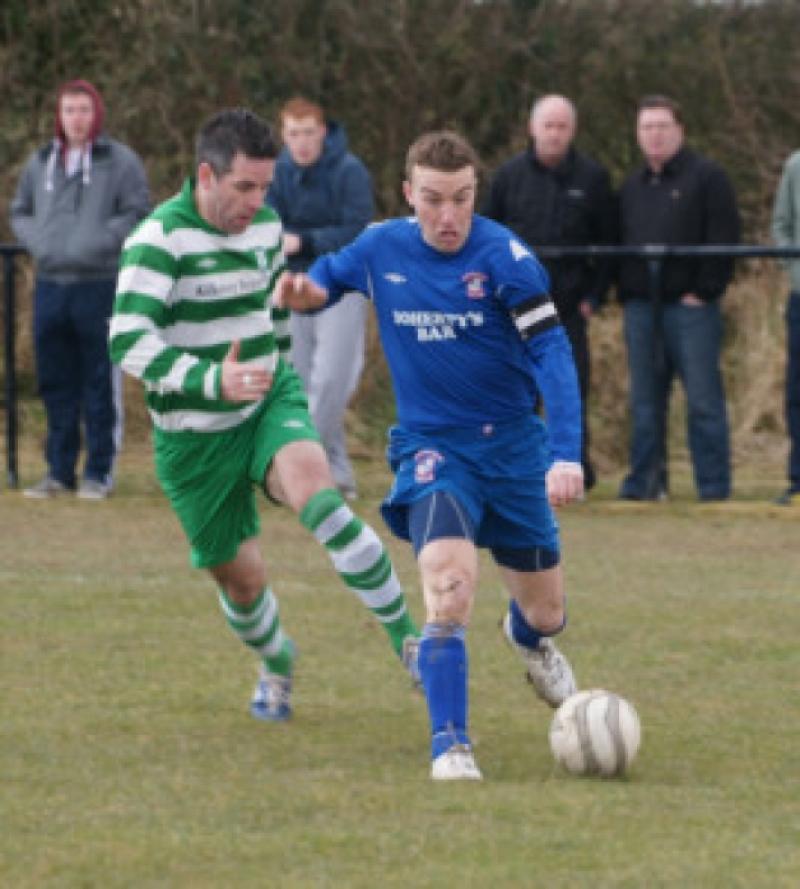 REFUSING TO give up until final whistle saw Evergreen B earn the Maher Shield spoils on St Patrick’s Day.

The men from the Kells Road showed incredible strength to give one last push in stoppage time, a move which saw them grab a last gasp leveller before nabbing the title on spot kicks.

In truth, ’Green looked dead and buried when they trailed city rivals Freebooters A as the game ticked towards a sixth minute of stoppage time at the end of a slow-burning final at Derdimus on Sunday.

With everything hinging on their last charge forward, defender Ger Galvin sparked bedlam on the Evergreen bench when he latched on to a loose ball with a first-time shot from the edge of the box that screamed into the top right corner of the net.

There was a cagey start from both sides, but Evergreen almost settled their nerves with a glorious chance to take an early lead after Sammy Johnston controlled the ball in a packed six-yard box on 16 minutes. The midfielder rolled his man and was left staring down at goal, but netminder Donal Brennan stayed big to make the save.

Freebooters didn’t have to wait much longer for their first real effort at breaking the deadlock. Full-back James Kelly sparked the 22nd minute move, snapping up a loose ball in midfield before setting off on the attack.

A quick one-two with Damien Raggett saw Kelly break through the middle before letting fly. Philip Johnston did well to take the sting out of the shot, moving quickly to boot the loose ball clear before Ger Hayes could pounce.

The stalemate continued for the half, despite the best efforts of both sides. Evergreen enjoyed plenty of possession, much of the play going through Gary Owens and Conor Barry on the left, but ’Booters were able to cope with the threat thanks to a strong defence well led by Kelly and David Rice.

The game began to liven up in the second half, with Evergreen working quickly to take control. Seamie Cummins almost grabbed the opener when he got his head to Conor Barry’s teasing 55th minute free, but Donal Brennan reacted well to push the ball to safety.

Barry’s deliveries were causing problems for the Blues, who were tested again when he whipped in a corner 60 seconds later. Ger Galvin met the cross with a looping header, but Brennan did well to push the ball over despite having the sun glaring into his face.

It was all Evergreen at that stage, so you can imagine their surprise when Freebooters took the lead on the hour after winger Aaron Molloy was upended in the box. Damien Raggett took the penalty duties and made no mistake, tucking the ball away in the left corner.

Evergreen pressed hard for an equaliser, going close with an Adrian Kealy header and two Cummins chances from close range, but they couldn’t find a way through. They almost fell even further behind, when Raggett beat the wall and Philip Johnston with a 79th minute free, but the ball clattered off the crossbar.

With injury-time looming ’Booters could have sealed the Shield when Molloy slipped sub Aidan Nolan through on goal, but Johnston made a fine save. The danger wasn’t fully over - the ball rebounded off Jason Quan, who had to race back and clear the ball off the line.

Missing that chance came back to haunt ’Booters, as Galvin’s last-gasp heroics sent the game into extra-time.

The sides couldn’t be separated in the additional 20 minutes, where Freebooters were reduced to 10 men following the dismissal of Ger Hayes. The stalemate continued into the early rounds of penalties - both teams missed their opening two kicks.

It was left to sub Michael Comerford to open the scoring with the fifth penalty, but Gary Owens quickly levelled matters. It was advantage Evergreen when Johnston stopped Neil Murtagh’s kick and then Ronan Holohan scored.

The drama went all the way to the end, as Jack Deegan’s penalty left all the pressure on Adrian Kealy. Goalkeeper Donal Brennan looked to have won the duel when he got down behind the shot, but the ball spun up and over the netminder to seal a memorable comeback.