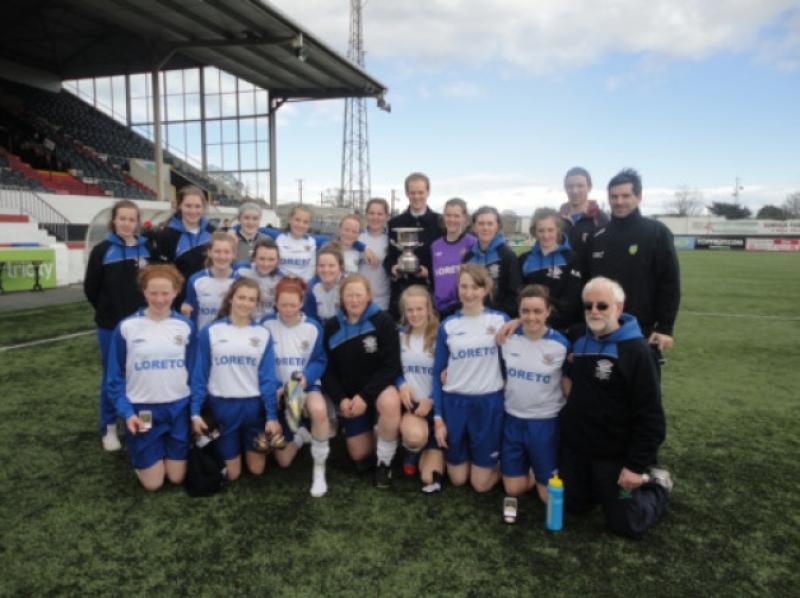 A MOMENT of magic helped Jenny Clifford to make soccer history for the Loreto Kilkenny.

A key part in her side’s charge to the final, Clifford’s eighth minute strike proved to be the difference as the girls from the Granges Road lifted their first ever All-Ireland soccer title at Dundalk’s Oriel Park.

Clifford, who has blazed her way through the competition, edged her side closer to the silverware after some great work from colleague Kirsty Maher. Taking the ball out of defence, Maher broke forward and clipped a 40-yard pass to Clifford, who split the Moville defence before smashing in a great goal.

Even more impressive was Clifford’s determination to get to the final. The Kilkenny girl had been training with the Irish under-17 squad in Cork, and got up at 6am to catch a train to Dublin before she was driven to Dundalk for the final.

The Loreto striker was quick off the mark, going close even before her goal with a first shot at the Moville target inside five minutes. Breaking past two defenders Clifford had her eye on goal and nothing less, but Cody Anderson made a fine save to preserve her clean sheet – but that only lasted for another three minutes, as Clifford made amends soon after.

The Loreto girls continued to hold the upper hand for the remainder of the first half. Although they created chances they couldn’t add to their tally, but were satisfied to go in with a one-goal lead at the break.

The second half saw Moville come out of their shell. The Ulster girls tried to force their way back into the game, but couldn’t get the better of a resolute Loreto defence.

As time wore on the Kilkenny girls began to turn the screw and went close to adding an insurance goal. Clifford almost made it 2-0 midway through the half when she unleashed a long-range effort that flew past Anderson, but the netminder was relieved to see the ball clatter off the crossbar.

Another thorn in Moville’s side was Laura Murphy, who narrowly failed with a chance of her own late on. Teaming up with Clifford, the pair cut Moville open with a neat one-two, but Murphy’s right foot shot was blocked the Ulster defence.

Despite those let-offs, there was nothing Moville could do to deny the Loreto their famous win.

“It was a fantastic win – a dream fulfilled,” beamed team coach Barry O’Neill. “The girls were delighted with the win and sang all the way home. It was even better when they got back to school where, the following morning, assembly gave them the credit they deserved.

Appropriately enough, the Loreto had their homework done when it came to scouting the opposition, who were going for their third All-Ireland title in a row.

“The girls knew what they had to do and who to look out for,” said O’Neill. “It’s been the same all the way through to the final. Look at our last three games – we’ve scored six goals and conceded none (3-0, 2-0 and 1-0). That’s some achievement from our goalkeeper and defence, who have gone up against players of international calibre.”

And the win will only serve to spur on the school’s younger players, who have a Leinster under-16 semi-final against Mullingar to look forward to.

“We have some great players coming through, with hearts as big as footballs,” added O’Neill. “We can build on this. The future is looking great for Kilkenny ladies soccer.”