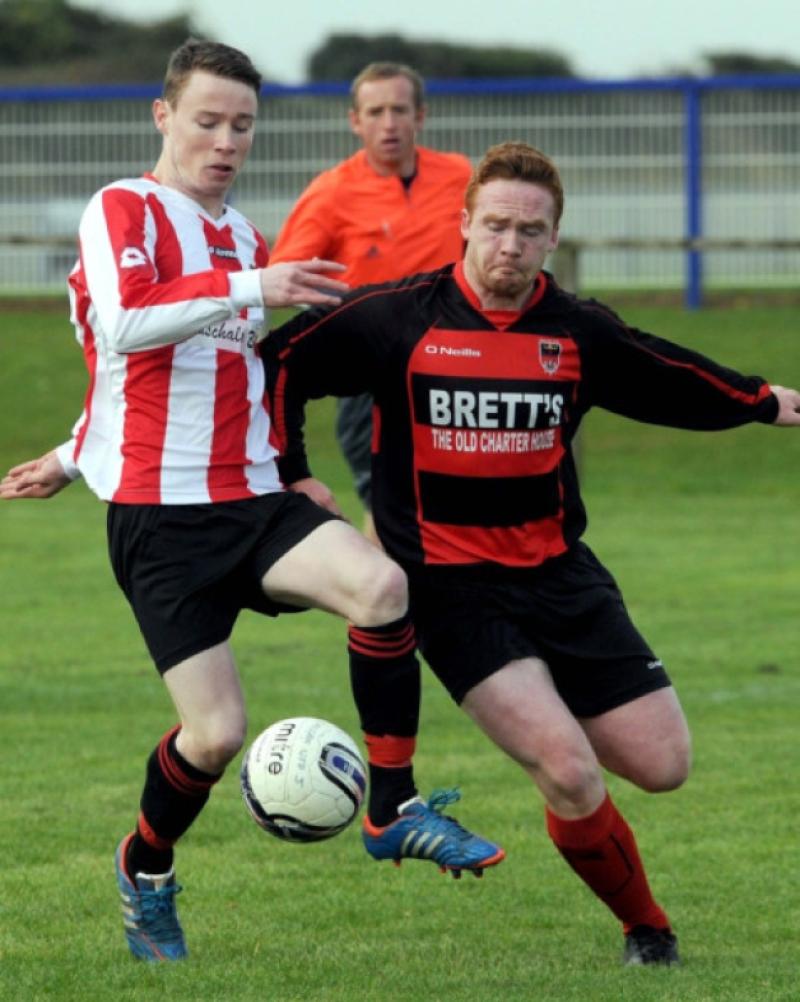 Spa United held on to top spot in Division One, but had to resist some strong pressure as Callan United made their point in Johnstown.

Spa United held on to top spot in Division One, but had to resist some strong pressure as Callan United made their point in Johnstown.

Simon Burke’s 63rd minute strike made sure Callan didn’t go home empty-handed, but they could so easily have nabbed all three points.

That they didn’t was down to some timely saves from Spa netminder Chris Leahy. He came to his side’s rescue in the 54th minute, doing well to prevent Joey Byrne’s glancing header from going in.

He was called into action again in the 66th minute, stopping Daniel McCormack’s close-range effort, but by that stage Burke had already struck.

Callan’s danger man, Burke finished a move which owed much to McCormack’s hard work. Picking the ball up in midfield he carved Spa open with a driving run.

A timely pass saw McCormack release Robbie Wall, whose shot was stopped by Leahy, but Burke was there to snap up the rebound.

The goal was a real setback for table toppers Spa, who took just 90 seconds to impose themselves on the game. Picking up Stephen O’Flaherty’s pass Mark Webster unlocked Callan with a clever ball from midfield. Enda Purcell was on it a flash, racing in and rounding goalkeeper Owen Wall before firing home.

Callan had trouble dealing with Spa in the early stages, and were thankful to Wall for not going two down on eight minutes. Jason Dermody went close with a powerful drive, but the netminder got down smartly to make the save.

Callan worked their way back into the game, getting a handle on the midfield battle. Joey Byrne created their best chance of the half, winning possession close to his own goal before picking out McCormack on the right, but his shot flashed wide of the target.

Spa seemed comfortable in that opening half, causing Callan plenty of problems through O’Flaherty, Purcell and skipper James Whelan. The trio linked up well in the 42nd minute, O’Flaherty working a Purcell ball back into Whelan’s path, but the midfielder couldn’t keep his long range shot on target.

Callan had been under the cosh in that opening half, but upped the ante after the restart. Even after Burke’s equaliser they continued in the same vein, forcing Spa to defend a little deeper than they would have liked.

The visitors pressed for a lead goal, nearly getting it when Burke chased down a P.J. Ryan back-pass on 73 minutes, forcing Leahy into a hurried clearance. The ball cannoned back off the striker, but flashed wide of the far post.

The visitors had a late chance to nab the win when McCormack shrugged off Danny Dermody and set himself up for an injury-time strike, but he couldn’t stop his shot from curling away from goal.

Freebooters A moved to the summit of the Premier Division table, but needed a late comeback to get the better of Newpark A.

Much like in their recent clash with Evergreen A Mark Ryan’s side took the game to the opposition and were rewarded with the opening goal, Dan Cullahane pushing the visitors in front on 15 minutes.

In the other Division One games a Mark Flynn hat-trick saw Newpark B beat Clover United 3-1. The win was enough to move the city back into second place in the table.

Tullaroan got their first point with a 1-1 draw against Freebooters B. Gerry O’Dea was on target for Tullaroan, Shane Kelly for the visitors.