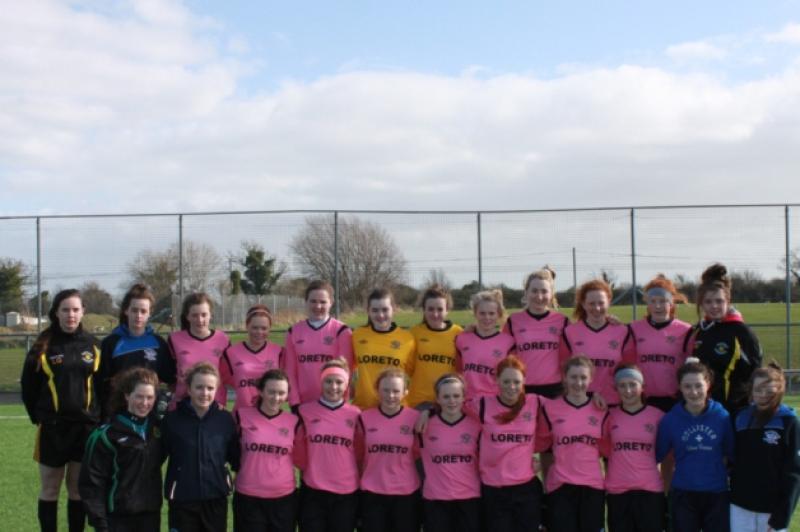 Megan O’Keeffe and Laura Murphy were the toast of Kilkenny as the Loreto kept their eye on some All-Ireland soccer silverware.

Megan O’Keeffe and Laura Murphy were the toast of Kilkenny as the Loreto kept their eye on some All-Ireland soccer silverware.

The city side travelled to Dublin for their meeting with Donegal side Carndonagh and battled hard to continue their quest of winning back-to-back national titles.

Forced to start without the influential Jenny Clifford, it looked like the Loreto were set for a tough fight. Instead, they hit the ground running and made a dream start.

Megan O’Keeffe made the hard running to charge down Louise O’Connor’s clearance out of defence. O’Keeffe got her reward, seizing on the ball and coolly slotting it past netminder Shauna Harkin.

Carndonagh were stung by that goal and tried to hit back. Niamh McDaid was their main attacking foil, going close with two quick attempts on goal, but the experienced Kirsty Maher was there to snuff out the danger.

The Ulster girls refused to buckle and pressed hard for an equaliser throughout the first half. Nicole Gordon gave the Loreto some cause for concern, especially when she set up Laura Devlin for a shot at the target, but Devlin’s 40th minute effort was wide of the mark.

The Loreto went back on the attack in the second half, breaking quickly in an attempt to double their advantage. It looked like their tactics would pay off when Aine Fennelly lobbed a beautifully weighted ball down the left wing to Laura Murphy.

Racing clear, Murphy had nothing but the goal on her mind, but a wonderful tackle from Louise O’Connor denied the Kilkenny girl her moment of glory.

The Loreto dominated the early exchanges in that second half, taking further control when Jenny Clifford was introduced to the fray before the hour.

The Kilkenny girls capitalised on their purple patch when, with 17 minutes left, they all but sealed their final berth. Having pushed hard for that second goal, the Loreto’s efforts were rewarded when Laura Murphy fired home from 10 yards out to give the Leinster champions some breathing room.

Carndonagh were down, but not out. Niamh McDaid tried to halve the deficit when she unleashed a shot from distance but Niamh Delaney, who played well throughout, was equal to the task.

The Loreto will now take on Presentation Secondary School, Thurles in the final, which will be held at the RSC Waterford, on Wednesday March 12. Kick-off is at 1pm.