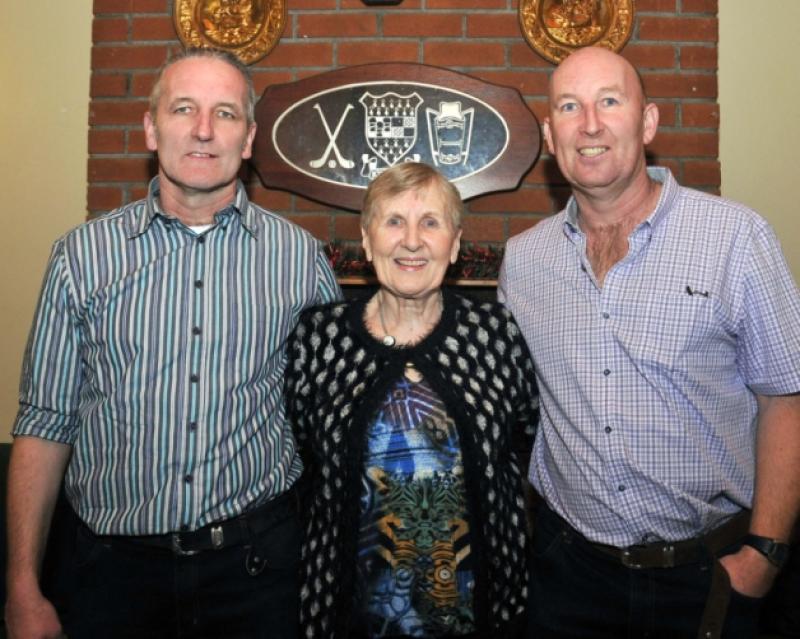 Another great chapter in a proud family history was written by Jim Nugent and his clan in the Kilkenny & District League at the weekend.

Another great chapter in a proud family history was written by Jim Nugent and his clan in the Kilkenny & District League at the weekend.

It was a real family affair as Fort Rangers swept to victory in their Division One clash with Brookville in Ballyragget, with not one but three Nugents on the scoresheet!

The Nugent show began with father Jim opening the scoring with a back post finish in chilly Ballyragget, before his son Emmet doubled Rangers’ advantage.

The visitors added to their tally on the hour through Mark Massey’s header, with Tony Moran quickly bagging a fourth.

The Nugent hat-trick was completed when Eddie Nugent followed his father and brother onto the scoresheet, while Moran wrapped up an emphatic win with a sixth goal in the closing stages.

While all three Nugents are regularly among the goals, Sunday’s game provided Fort with a proud landmark.

“That was the first time all three of them scored in the same game,” club secretary Jim Cashin told the ’People. “It must be a local record.”

Better yet, Jim’s goal may also be a landmark strike. The veteran player (the only Kilkennyman with four Oscar Traynor titles to his name) recently turned 50!

“Jim is a real freak of nature,” said Cashin. “He has been an incredible servant, not just to the club but the game. He never misses a training session, and also looks after the club’s under-8 team!”

Nugent also juggles playing with managing the Fort juniors - but to complete the family links he passes the duties to his brother Brian while he is on the pitch!

The race for the Division One title is nearing the final stretch, with Freshford Town maintaining a relentless gallop.

Last year’s Division Two champions remained on course for successive promotions by picking up their eighth win of the season with a 1-0 victory over Tullaroan. Ger Doheny was the man of the moment as Town went seven points clear at the top.

One more point should be enough to see them back in the top flight next season, an incredible revival for a club who had opted out of the league not so long ago.

The race to join Freshford may have lost a contender, as Thomastown United B crashed to a 6-2 loss away to Stoneyford United. Things have gone well for Stoney of late, who made it three wins from four with this result on Sunday. Joey Gahan and Conor Coffey chipped in with two goals apiece for the winners, who also had Martin Murray and Adam Fennelly on the scoresheet as they moved into second place on 21 points.

Rory Leadbetter and David Kavanagh were on target for Thomastown, but this defeat leaves them three points behind Stoney with two games left to play.

There was only one game in the top flight, where Evergreen B piled more misery on Bridge United A.

Ger Galvin’s 78th minute goal gave the city side all three points but may also have ended Bridge United’s stay in the Premier Division. Bridge have nine points, the same as Spa and three more than Evergreen A - but they have played two games more than the Johnstown men, and seven more than Evergreen A.

The relegation six-pointer between Spa and Callan was called off, as was the match between Freebooters A and Lions A.

St Mary’s lead the chase to join champions Freebooters B in Division One next year as they marched to a 4-1 city derby win over Ormonde Villa.

Stephen Quirke, Martin Boki and Paul Delaney were on target for the Saints, who could go up if they win their next game.

River Rangers missed the chance to close the gap on St Mary’s when they were held to a 1-1 draw by the Lions B.

It looked like the hosts were heading for three points when Paddy Kennedy netted an 80th minute goal, but Shane Donohue’s late reply earned the visitors a share of the spoils, leaving them four points clear of the drop zone.

Callan United B haven’t given up hope of promotion from Division Three, as their 5-2 win over Clover United B proved.

Braces for Brian Doheny and Mike Cooper helped Callan win the battle of the Uniteds, with Murt Cuddihy also on target for the hosts, who went third in the table. They are 10 points behind Castlewarren Celtic, but have four games in hand on the Celts.

There was a good win also for St John’s who beat Brookville B 4-1 away from home. The city side fell behind early on, but fought back well through Karl Jenkins (2), Steven Kelly and Piotr Ruth to gain a good win on the road

Finally, Evergreen gained the perfect pick-me-up from their FAI Junior Cup exit by moving on in the Leinster Junior Cup.

Sean Barcoe was the main man as they beat St Kevin’s Boys after extra-time in Dublin. Although Ben Hickey’s opener was cancelled out, Barcoe blasted Evergreen back in front before the hour.

Kevin’s levelled matters a second time, but had no answer when Barcoe struck again in extra-time.