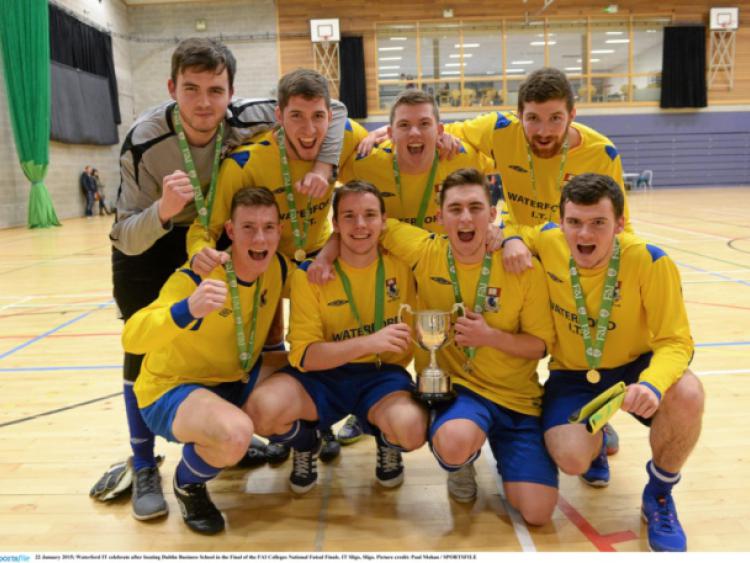 A Kilkenny ’keeper has set his sights on making a major European competition - but first he must achieve a financial goal.

A Kilkenny ’keeper has set his sights on making a major European competition - but first he must achieve a financial goal.

Clogh native Eoin Doyle is part of the WIT futsal team who have earned the right to represent Ireland on the continent.

The team were due to jet off to the Polish city of Poznan shortly for the European University Futsal games, but their trip has been grounded by an administration error.

Now the team are in a race against the clock the get the additional funding they need to get their tour back on track.

“It was only a few days ago that we found out we had to raise more money for the trip,” Eoin told the ’People. “It was tough to learn that.

“All the players thought the trip had been booked from July 31, but an error was made in the booking - we were due to fly out on August 2, the day the competition starts, which meant we would have missed our first game Now our trip has to be extended by four days, which will cost the group an additional €4,000.

“It was a mistake,” he said. “Nothing can be done about it - now we have to get over it and raise the extra money we need.”

The team booked their place in the European finals when they won the national title earlier this year, beating the Dublin Business School in the Irish futsal finals in Sligo. Their attention quickly turned from on-court action to fund-raising.

“We began raising funds for Poznan almost right after winning the national final,” he said. “We had raffles and fund-raising nights in the college bar. We raised a good bit - we thought we had enough done, but now we need a little extra we’re flat out again.

Having to go back on the fund-raising trail is tough, but the team are taking it in their stride.

“We’re not going to get caught up in it too much,” said Eoin. “We’ve been in training for the finals since the end of May so we’re in the zone. We know what we have to do and we’re going to do it.”

No matter the sport, representing your country is a huge achievement. Futsal may be a relative newcomer to Irish shores, but Doyle is one of many players who have been bitten by the bug.

“This is my first year playing futsal,” he said. “I had never played it before I started going to WIT - I had played junior soccer with Deen Celtic last year in Castlecomer as youths soccer in the past, but futsal was new to me. I was asked to play by the team’s manager and said I’d give it a go. We won the regional competition in Carlow, then went up to the national finals in Sligo.”

It was the All-Ireland finals where Doyle got a glimpse of just how big the sport is on a global scale.

“When we went to the national finals we were surprised to see some of the colleges who were represented,” he said. “There were teams from the likes of the Dublin Business School (DBS) and Griffith College - but they were full of Brazilian players. Futsal is a major sport for them, so we got a bit of a land when we saw them play!”

The netminder could see the difference when the games kicked off.

“You could see it in their style when they played games,” he said. “I’m a goalkeeper, so my role isn’t much different from soccer, but you can see the difference in the style of futsal for the outfield players. The game is more technical and the action is in quick bursts with short sprints - even in short matches the lads are wrecked!

“It was a tough competition in Sligo,” he recalled. “Right the way through the tournament we never took the lead in a game; we went behind and had to battle back. In our first game we were 1-3 down to DBS with a minute to go, but two goals from our centre-half helped us to get a 3-3 draw. It was tough, but we managed to get through the games and qualify for the European finals, which was the main thing.”

While the Irish might not have the long history of some of the other 23 nations involved, the team isn’t lacking in experience.

“A lot of the lads have played League of Ireland at under-19 level, so we’ve plenty of great players in the squad,” said Doyle. “There is a good level in the team.”

Should all things fund-raising go their way the WIT team (Doyle, who studies International Business at the college, is the only Kilkenny representative in the 11-strong squad) will jet off to Poznan on July 31, with matches starting on August 2.

Naturally, the squad are looking forward to the tournament.

“Poznan is a football-mad city,” he said. “I can’t wait to get there and I’m sure it’s the same for the rest of the lads.

“It’s nine or ten days playing soccer in a different country,” he added. “What more could you want?”

Eoin has set up a web page to help raise funds for the team’s trip to Poznan. Donations can be made to: gofundme.com/ydm6pj4