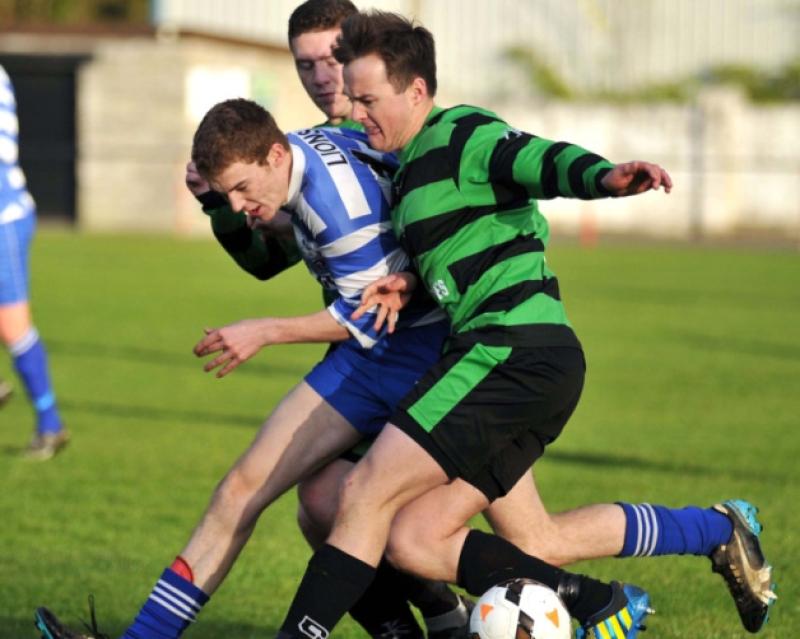 They had to go the extra mile, but Evergreen C have saved their Division Two status.

They had to go the extra mile, but Evergreen C have saved their Division Two status.

The city side were forced to endure the torture of a play-off, but held their nerve to send the Lions B team down at their expense.

The scoreline might not suggest it, but Saturday’s game in Castlecomer was a close-fought encounter for most of the 90 minutes. It looked like a cracking Peter Tierney free-kick would settle the matter, but Evergreen’s extra energy helped drive them over the finish line.

The killer blow, as far as the Durrow men were concerned, came as they pressed for an equaliser four minutes from time.

Driving forward in search of that late leveller, the Lions were undone when an Evergreen clearance was seized on half-way by Tierney.

Releasing Chris Aylward on the left, all of a sudden the Lions defence was over-ran. Aylward squared a neat ball to Sean Lowry, who cleverly chipped it over netminder Ger Alley, all but sealing the Durrow side’s fate to life in Division Three.

It was a cruel blow for the Lions, who started well but just couldn’t take the chances their hard graft had created.

They went close to taking the lead inside five minutes, when James Campion blasted a thundering free-kick past the Evergreen wall, but young netminder Darragh Simpson showed strong hands to push the ball away before Mikey Andrews headed the loose ball to safety.

Simpson played a key role in frustrating the Lions in their dominant spell, time and again showing good hands to keep his rivals out. He made a fine save when James Larkin powered an 11th minute header at the target, but better was to come.

Thinking on their feet

Always thinking on their feet, it looked like the Lions had finally found a way through when a quickly-taken free-kick on 14 minutes left Steven Thomas racing towards goal.

With the Evergreen defence and sixes and sevens Thomas had time and space to pick his spot. The ball zipped towards the top right corner of the net, but Simpson made a superb save, getting behind the ball - and holding on to it.

At that stage it seemed as if it would just be a matter of time before the Lions would take the lead - but Evergreen’s attacking game was about to click into gear. Having fashioned some half-chances, they finally showed their teeth when, in the 25th minute, Jack Walsh made a searing run down the left.

Skipping a tackle, Walsh drilled in a ball which found its way to Colm Walsh.

He aimed a low shot towards the inside of the far right post - it would have made it there but for a fine save from Ger Alley, who got a strong left hand on the ball to keep it out, and then showed quick reactions to smother the rebound before Jack McAuliffe could pounce.

The city side were building momentum and were a whisker away from taking the lead on the half hour. Sent on his way by a great Colm Walsh ball, Tierney left his man for dead and raced for goal, but his powerful shot clipped the outside of the left post.

He quickly shrugged off the disappointment, however, as within five minutes he had netted a stunning opener.

Awarded a free after Eoin Connolly was fouled on the edge of the D, Tierney stood over the ball. The Lions wall stood no chance as he thundered a powerful strike over the defence and into the left side of the net - it was a peach of a strike!

The goal spurred Evergreen on to search for another. They would have scored it too, but for Alley’s presence between the sticks. The netminder made a vital save in the closing stages of the half, getting down well to block a Tierney shot after he had charged clear from half-way.

The city side continued to keep on the front foot in the early stages of the second half - Alley had to look lively to deny both Steve Thompson and Jack Walsh from close range - but, as the half wore on, it was the Lions who began to turn the screw.

Needing that one goal to get back on level terms it was no surprise to see them drive forward, but an Evergreen defence superbly led by Mikey Andrews - he really was everywhere when needed - kept them at bay.

It was only in the closing stages, when Durrow bodies began to tire, that Evergreen found the freedom to take the game by the scruff of the neck.

Sean Lowry had only been on the field 12 minutes when he netted the second Evergreen goal, but needed just three minutes more to double his tally, pouncing to finish from close range after Donal Brennan saw his 89th minute effort come back off the post.

There was still time for the city side to rub more salt in the Lions’ wounds. That came in stoppage time, when a superb Lowry ball sent Chris Aylward free on the left.

The sub had too much pace for the tiring Lions defence, charging through before coolly slipping a low shot past Alley to secure their Division Two survival.

The destination of the Premier Division title has already been decided, but Thomastown United A are determined to keep the good times rolling.

The newly-crowned champions could have been forgiven for putting their feet up for their remaining league games, but that hasn’t been the case - they proved as much when they travelled to the Kells Road and took all three points with a 4-1 win over Evergreen B on Sunday morning.

A week after hitting the net in the title-winning game against Callan, Steven Connolly and Dessie Walsh were on target again for United. Kelvyn Skehan made it 3-0, and while Mark Owens pulled one back for the hosts, David Prendergast quickly restored Thomastown’s three-goal advantage.

It proved to be a bad week for Evergreen B - they lost 2-0 to Freebooters A during the week, Cian Loy and Niall McEvoy on target for the Blues.

Evergreen A may have lost their crown, but are determined not to let too much more slip. They picked up six points during the week, beating Newpark A 3-0 in their midweek game before hitting the Lions A team for five on Sunday morning.

Ciaran Snype (2) led the way with a brace, with Brian Jordan, Chris Whearty and Robbie Quan also on target in the 5-0 win, a result which gives them a great platform going into Sunday’s McCalmont Cup clash with St Mary’s.