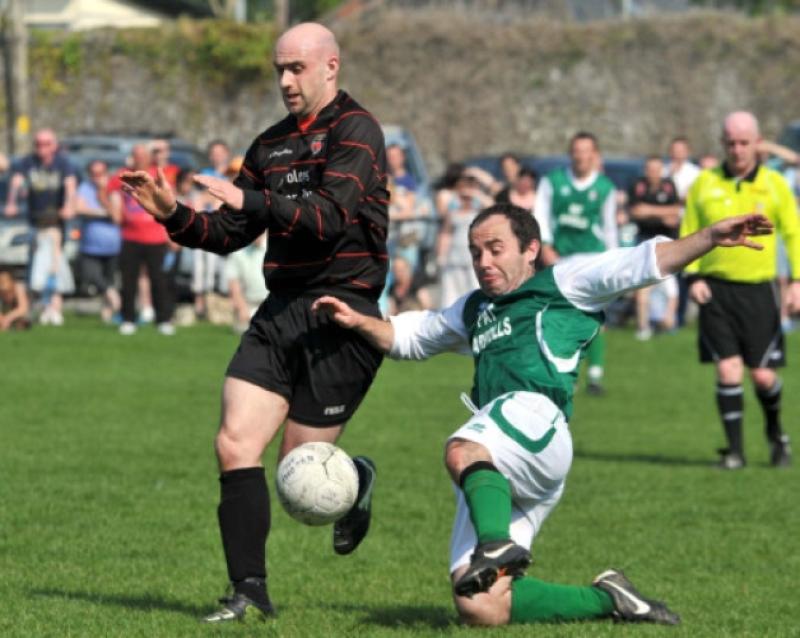 A CHANCE to add a silver lining to their season, and to right a wrong from the 2012 campaign.

A CHANCE to add a silver lining to their season, and to right a wrong from the 2012 campaign.

That’s the tempting double that lies in front of Newpark A ahead of this weekend’s McCalmont Cup final.

“We have unfinished business with the McCalmont Cup,” was the simple message from manager Mark Ryan, who has guided his side into the final for the second year in a row. “After losing last year’s final you really want to get back there and have another crack at it.”

It’s just under a year ago that Newpark reached their first ever McCalmont Cup final but it was a day to forget as they lost a tense penalty shoot-out to Callan United. They are back in the decider, but have had to overcome some hurdles, not least in the semi-final.

“We knew the semi-final against Freebooters A was going to be 50/50, especially after getting the hardest of the three other teams left in the draw,” said Ryan. “From that point we didn’t even begin to think of the final but we got the little bit of luck that I’d hoped we would.”

Whether good fortunes smiles on them this Sunday is unknown, but one thing Ryan is certain of is that Brookville will be up for game.

“Brookville are going to come in and throw everything at us,” he said of Sunday’s opposition. “They won their semi-final the hard way. Coming from behind to beat the champions shows they are a team with character. I’m sure they got the chance to watch our semi-final and prepare for the final.”

Football fans have been given a novel pairing for this year’s final, which features two of Kilkenny’s youngest clubs (Ballyragget were founded 35 years ago, Newpark just 20).

“It’s great for the cup,” he said. “Look at last year’s final - it was years and years since Callan United had been in the final, while it was our first time there.

“The crowd was great last year and I’m sure it’ll be the same this Sunday,” he added. “Newpark is a community club so you have that following.

“It will be the same with Brookville,” Ryan continued. “They’ll have a huge following from Ballyragget who will go to the game - even people who don’t normally go to matches. There should be a great buzz there.”

Newpark are looking forward to the big day, having worked hard to get there. They drew Premier Division side Bridge United A in the first round (Shane O’Neill scored twice in the 2-0 win), before being paired with another top flight side, Clover United A, in round two. Tony Delaney and Ger Wall scored here in the 2-1 win.

They had more Premier opposition in the semi-final, but there was another tough game to overcome first. “The ’Booters game was the hardest of the lot, but the scoreline of the quarter-final against River Rangers didn’t reflect the game,” Ryan recalled. “We won 2-0 but we could easily have gone out of the competition that night. It was 0-0 for a long time on a small pitch against a team who put in a huge effort. River Rangers had their chances as well - it was anything but a walk in the park.”

Those hard-fought wins in the latter rounds were built on their Division One league success. It was a complete transformation from last year, where Newpark faded in the closing stages of the league run-in, then lost the Division One Cup and McCalmont Cup finals to AC Kilkenny A and Callan United respectively via the dreaded penalty shoot-outs.

This year, Newpark have found that extra ingredient needed to get those wins.

“I always felt that if we had won the Division One Cup last year we would have kicked on and won the McCalmont Cup,” the manager reflected. “I know that if we hadn’t won the league then we would have had those old doubts against Freebooters in the Cup semi-final. The game against Southend United (Newpark travelled to Ballyhale and grabbed the three points to clinch the league title and earn a place in the Premier Division next season) gave us the belief that comes when you win something. It was that belief that got the lads over the line against ’Booters.”

And that belief will be tested again on Sunday when they will also try to exorcise a colourful ghost from last year.

“Brookville wear black and red so we’ll be wearing the ‘lucky’ green and white kit we wore last year!” joked Ryan. “Whatever about the colours, the day is about two young clubs who have never won a major competition in Kilkenny. It’s going to be a great final.”