Jenny jets off as Russia beckons 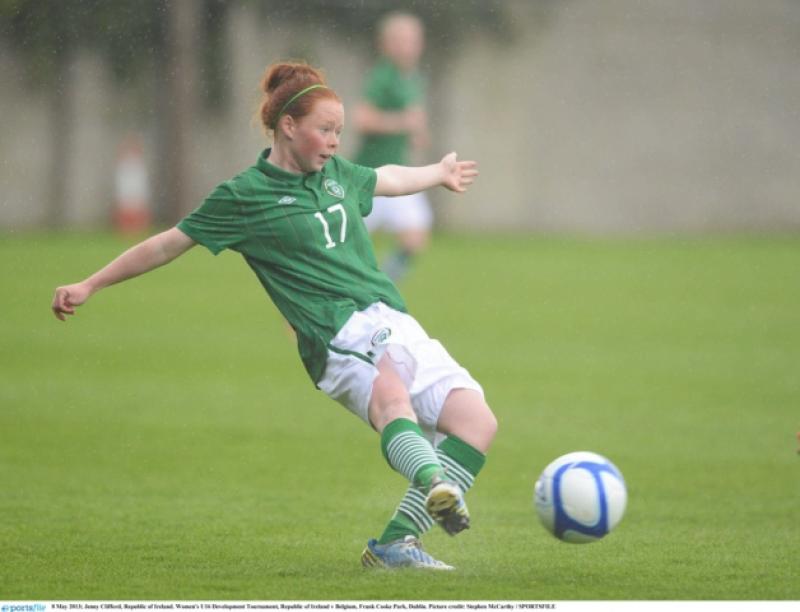 Silverware has already been won on Irish soil - but can Jenny Clifford now help the Republic of Ireland move closer to a European title?

Silverware has already been won on Irish soil - but can Jenny Clifford now help the Republic of Ireland move closer to a European title?

The Kilkenny teenager was part of the Irish under-17 women’s team who won the Carrickfergus Cup, but they’ll have a tougher task when they travel to Russia this weekend.

A shot at European glory is there for the Irish girls, but first they must get through three tough international challenges as the first round of qualifying for the European Championships is held in the city of Kazan.

Clifford was selected for Dave Connell’s side that will travel East on the back of some excellent performances for the Girls in Green when they played their Northern Ireland counterparts in the two-legged final in Carrickfergus last week.

The Evergreen player was sprang from the bench in the first game and duly made her presence felt, scoring twice as the Republic won 6-2. Clifford was also involved in the second leg, where her side wrapped up the title with a 2-0 win.

The games were used as the final selection process for the panel selected to represent Ireland at the first qualification stage for the UEFA under-17 Women’s European Championships. Drawn in Group Four, Clifford will be part of the Irish squad that will take on Russia, Bosnia and Turkey in Kazan from Tuesday next.

News of the international call-up reached Clifford just before she took to the field for her club side Evergreen in their FAI Women’s under-16 Cup game against Peamount United last Friday.

Naturally, all involved with the Kells Road side were thrilled for their colleague.

“Everyone involved with the team had heard Jenny made the Irish side,” beamed Evergreen manager Barry O’Neill. “When she got to the ground she was greeted by a massive cheer everyone in the dressing-room.”

Getting an international call-up is nothing new for Clifford. She has also been capped at under-16 level, playing for Ireland in a development tournament against the Czech Republic, Wales and Belgium earlier this year.

Clifford has been a key member of several Loreto school soccer teams over the last few seasons,. She also represented her school and county with distinction on the camogie pitch.

While the Peamount game didn’t go her side’s way Clifford will be hoping for better fortune when she dons the national green and white kits.

She will join up with the rest of the international squad today (Wednesday) before wrapping up training in Meath. The team will fly to Heathrow on Friday, from where they will leave for Moscow.

The touring party is expected to arrive in Kazan - which is 500 miles east of the Russian capital - on Saturday.

The team will have plenty of time to prepare for their opening game of the group, which will see them take on Bosnia-Herzegovina on Tuesday. Following a rest day, they will face Turkey before completing the group with a fixture against hosts Russia on Sunday, August 11.

The mini tournament is just the first hurdle Ireland will have to clear if they want to make the European Championship finals.

The first round of qualification has seen the continent divided into 10 sections. From the 40 countries involved the 10 group winners, together with runners-up and the third-placed side with the best record against the top two in their section will go into the hat for the second qualifying round draw on Thursday, August 15.

Joining these teams will be Germany, France and Spain. The teams will compete in another group stage, to be held in September and October. Ireland will be hoping to earn one of the seven places in the finals alongside hosts England.

The European Championships will held at four grounds in England from November 26 to December 8. In an even bigger incentive, the top three sides from here will qualify for the 2014 under-17 Women’s World Cup finals, which will be held in Costa Rica next March.

Ireland have a good record in the Women’s Championships in recent seasons. They made the second qualifying rounds on the last two occasions, but had their best result when they made the final in 2010, losing to Spain in a penalty shoot-out in Nyon, Switzerland.