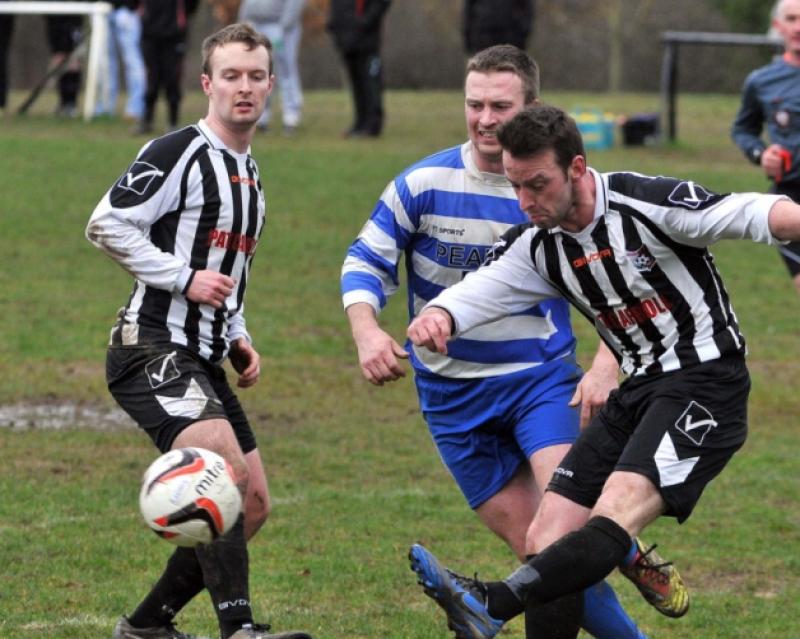 A quick blast of goals saw city side Newpark tame the Lions and grab the last spot in the Maher Shield semi-finals.

A quick blast of goals saw city side Newpark tame the Lions and grab the last spot in the Maher Shield semi-finals.

Mark Ryan’s side had to bide their time, but three goals in nine minutes around the half-time break saw them shake off the Durrow men and move into the final four.

A balanced game swung Newpark’s way jut six minutes before the interval, writes Trevor Spillane. Henry O’Neill was the instigator, whipping in a free-kick from close to the end line on the right side of the box.

The ball went all the way to the back post, where Ray Meagher rose highest to head back across the box. The ball dropped into a sea of players, but Michael Comerford pounced to stab home from two yards out.

That goal shook the visitors, who had been in contention up to that point. However, their task became even tougher when they leaked another in the dying seconds of the half.

Incredibly, the goal came from a Lions attack. Netminder John Dumecz did well to swat a teasing Darren Lynch corner to safety, then dashed from his line to flick the ball on to Shane O’Neill.

Play was moved to Comerford, who sliced the Lions open with a raking ball for Henry O’Neill to race on to. His shot was blocked, but the striker showed great awareness when the ball came back to him, unselfishly squaring it for Tony Delaney to slip home.

The Lions needed to strike first when play resumed, but their hopes took a beating as Newpark added a third goal when the new half was three minutes old.

Delaney did his bit to end the Durrow hopes, picking up Stephen Dawson’s clearance midway into the Lions half. Working a little space, Delaney moved the ball out from his feet and let fly with a sweet low strike that rocketed inside John Finnegan’s left hand post.

That goal flurry lit up the game and, as a consequence, almost ended it as far as the Lions were concerned.

The visitors had made a bright start and could have taken an early lead when a neat one-two with Michael Dooley saw Darren Lynch break through on goal, but his 10th minute shot was comfortably dealt with by netminder Dumecz.

Along with Niall Brophy, Lynch was a key player in the early stages for the Lions, but for all their work they couldn’t find the finishing touch they craved. Brophy had another crack at the target when he got on the end of James Campion’s 18th minute pass, but he lashed his shot over.

Newpark found their composure after that, but like the opposition they were also lacking the final touch. They had a great chance to go in front when Michael Comerford’s teasing 25th minute free dropped into a crowded six-yard box, but the last touch needed to knock it home was missing.

The game’s entire complexion changed when Newpark hit that goal flurry, as all three strikes rattled the confidence of the visitors. However, the Lions rose to the challenge put in front of them.

They had a chance to grab a glimmer of hope when Michael Freeman’s teasing 50th minute cross popped up in front of Michael Dooley. Given time Dooley connected with a vicious volley, but John Dumecz preserved his clean sheet with a super reaction save.

Still the visitors pressed on, going close again just a few minutes later. Freeman was the provider once more, this time from a corner, but Darren Lynch’s glancing header flashed past the left post.

The Lions battled on for most of the second half, going close again with two more opportunities in the final quarter. James Campion tested the hosts with a wicked free that Dumecz did well to punch clear.

The netminder was at it again on 88 minutes, doing well to hold on to Cormac McCann’s header.

While there was nothing but frustration for the Lions, Newpark finished with a flourish. Defender Stephen Dawson made a trip forward for a corner worthwhile, nodding a loose ball home after Lions netminder had John Finnegan stopped Tony Delaney’s close range shot.

That was enough to copper-fasten Newpark’s place in the final four, where they have been drawn away to Freshford Town. The winners of that tie will meet either Evergreen A or St Anne’s in the final.