The famine is over! - Mighty Thomastown United are Premier Division champions! 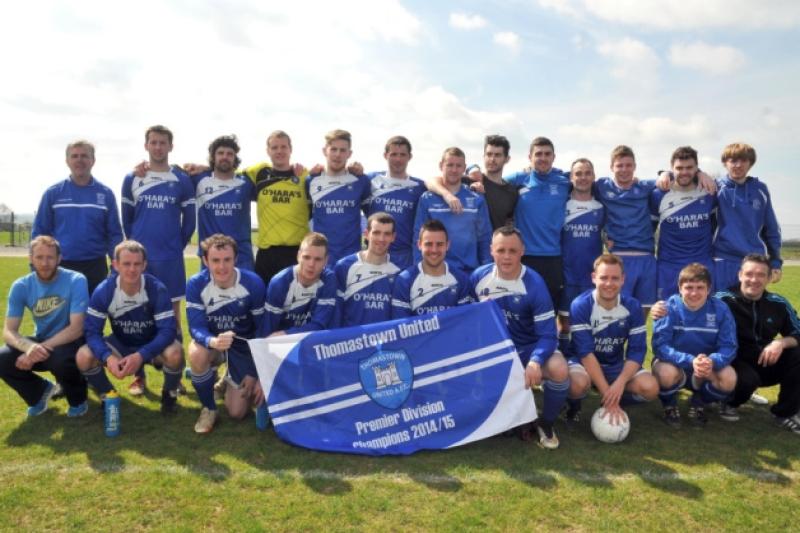 Thirty-four years of emptiness were finally ended as Thomastown United A returned to the top throne in the Kilkenny & District League.

Thirty-four years of emptiness were finally ended as Thomastown United A returned to the top throne in the Kilkenny & District League.

It was a roar of relief as much as celebration when referee Pat O’Connor blew the final whistle to signal the end of Sunday’s game with Callan United A.

The 4-1 result gave Thomastown their 12th win of the campaign but, more importantly, saw them open up a gap the title holders Evergreen A could never bridge - finally, they were the Premier Division champions!

A large crowd turned out at United Park in the hope they would finally see Thomastown clinch the league spoils, but even they would have been amazed at how fast the hosts hit the ground running.

Thomastown would have loved a fast start, but they were in dreamland when it took them just three minutes to get off the mark. Andy Kavanagh lit the fuse with a great through ball for Steven Connolly.

Springing the offside trap, Connolly burst past the Callan defence and into the box, pausing only to slip a low shot under netminder Dylan Roche.

It was a goal that lit up the ground - was it finally to be their day?

However, Callan were determined not to lie down and accept defeat. They weren’t about to yield, as Simon Burke proved when he raced after Tony Delaney’s excellent crossfield ball, but it had just too much pace on it for him to control.

The visitors kept on the offensive, Delaney going close with their next effort. He did well to lose his marker, racing in at the back post to meet Joey Byrne’s 13th minute corner, but his downward header bounced over the bar.

Despite having the lead Thomastown looked cautious as Callan began to power forward. Starting from the back - Luke Burke impressed in defence - strong performances from Robbie Wall and Tony Delaney helped to bring more firepower to Simon Burke, their main threat.

Burke had calls for a penalty when, in the 20th minute, he chased Wall’s great ball into the box. He tangled with Derek Brennan for possession, going down under the challenge, but his claims for a spot kick were waved away.

That frustrated Burke, but he made amends with a great equaliser four minutes later. Tony Delaney started the move, pouncing on a stray ball in midfield and flinging it out to right flank. Eoghan Fahy was on it in a flash, looking up to deliver a peach of a cross. Burke did the rest, darting in between the two central defenders to nod home an unstoppable header.

Burke was the tormentor in chief, using his pace and power to trouble the hosts. He almost helped himself to a second goal on the half hour when he latched on to Derek Brennan’s header back towards goal, but Robbie Kavanagh raced across to make a telling tackle, forcing the ball out for a corner.

Gradually, Thomastown rode out the storm. The presence of Eamon Lyster and Dessie Walsh in midfield helped, the latter having a big say in how the hosts restored their lead five minutes before half-time.

Winning possession on half-way, Andy Kavanagh sent Mick O’Neill away down the left. A clever cross picked out the incoming Walsh, but he was fouled in the box.

Mick O’Neill took the spot kick duties. Every pair of eyes in United Park was on him but he made no mistake, finding the bottom left corner of the net with an empathic low strike.

The goal released the pressure valve that had descended on Thomastown, and at the right time. Playing with freedom again, they drove forward with an increased effort.

The second half saw Thomastown deliver a performance worthy of champions.

With the momentum in their favour (not to mention a breeze that sucked the ball towards the Callan goal) they spent most of the half camped in Callan’s territory.

Dessie Walsh was heavily involved their first flurry of attack. He could have bagged a third for Thomastown when he got on the end of Mick O’Neill’s teasing 50th minute corner, but he glanced his header wide.

Walsh went closer again some minutes later, beating the offside trap as he raced on to O’Neill’s excellent diagonal ball but Dylan Roche raced from his line to smother Walsh’s shot.

The hosts kept pressing, and should have added to their lead with their next attack. Nathan Sherry thought he had done just that when he got on the end of Andy Kavanagh’s lofted ball over the top and chipped the advancing Roche, but the ball bounced agonisingly wide of the left post.

The miss did little to dent Thomastown’s confidence, something they proved when they finally got the third goal they craved on the hour. Steven Connolly was the architect, driving at Callan’s defence with a mazy run that took him to the corner.

Connolly’s shot was blocked, but the danger wasn’t over. Andy Kavanagh recycled play, drilling in a low ball Connolly flicked on to Eamon Lyster, who hammered home the third goal with glee.

There was still time for Thomastown to put a gloss on their title-winning performance.

Dessie Walsh capped a memorable day for his side, putting the finishing touch on a move that started with a composed clearance from defence. When play found its way to Mick O’Neill he floated a ball into the box. Walsh controlled the ball with his first touch, then flicked it over the outrushing Roche to spark celebrations 34 years in the making.

Note: There was a very sporting gesture at the end of the game. After the celebrations, the Thomastown players and officials were afforded a guard of honour by the Callan United contingent as they walked back their dressing-room - a great touch from the visitors.