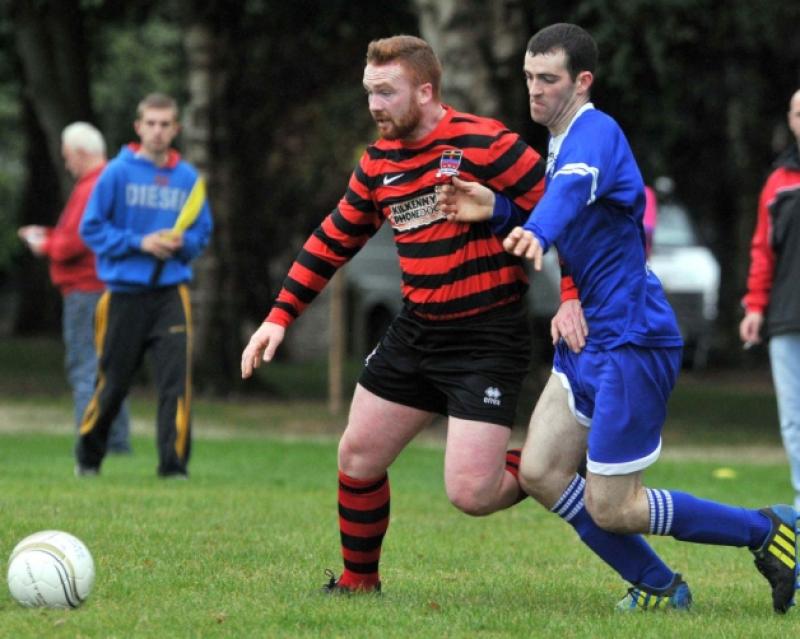 It may have only been the first game of the new season, but Thomastown United showed they have serious Premier Division title aspirations.

It may have only been the first game of the new season, but Thomastown United showed they have serious Premier Division title aspirations.

United made the tricky opening day trip to Callan, but were happily able to go home with all three points in the bag.

On an incredible start to the campaign Thomastown edged a hard-fought game which everything in the first 45 minutes - five goals, two penalties and a red card.

The game also had what proved to be a stunning winner. Already 2-1 up, Thomastown made a huge step towards the spoils when Michael O’Neill opened his account in style.

The former East End United player marked his Thomastown league debut in some style. It looked like Callan had survived when they repelled Andy Kavanagh’s burst forward, but when the ball broke loose O’Neill pounced, unleashing a first-time long range strike that screamed into the top left corner of Owen Wall’s net.

The goal marked the end of an incredible first quarter in which Thomastown took the lead, lost it and a player - and then surged ahead.

It wasn’t as one-sided as it might sound. Callan, back in the top flight, almost had a dream start to mark their top flight status. The game was barely 60 seconds old when Lee Delaney controlled a long free and flicked it on to Simon Burke, but Paul Dunne did well to tip the ball over the bar from point-blank range.

The pace of the game saw both sides attack with speed. One such instance saw Thomastown go close when Kavanagh’s sweeping sixth minute shot was cleared off the line by Robbie O’Brien.

Within seconds the hosts countered. Burke did well to pick up the ball and hold off Davy Wemyss, but he couldn’t keep his shot on target.

Those early misses would haunt Callan, especially as Thomastown made no mistake 60 seconds later. Undone by a stray and short back-pass, Callan could only watch as Nathan Sherry sprinted through before sliding a low diagonal shot beyond Wall.

Callan’s response was swift. Breaking from defence, John J. Egan cruised into midfield before releasing Tony Delaney down the right. He drove a low ball across the box, one that bobbled though a sea of legs before finding Simon Burke. The equaliser seemed certain, but an off-balance Burke pulled his shot over the bar.

Callan refused to give in and got their due reward with 15 minutes on the clock when Tony Delaney was fouled in the box. Owen Wall left his own line to take the kick and made no mistake, tucking a low shot to the left of his opposite number Paul Dunne.

Buoyed by that goal, Callan got another boost when their rivals were reduced to 10 men five minutes later. Davy Wemyss got his marching orders, reacting after a Lee Delaney tackle, but rather than go to pieces Thomastown’s response was emphatic.

The visitors might have been a man down, but within two minutes they were a goal in front again. Sherry tried his best to get on the end of Kelvyn Skehan’s corner, but was barged in the back before he could make the connection. Penalty!

Andy Kavanagh took the penalty, but saw his shot saved by Wall. The midfielder stayed cool, however, controlling the rebound before finding the net at the second attempt.

With Paul Dempsey brought on to reinforce the back four Thomastown showed no ill-effects of that dismissal. C.J. Browne moved into the centre alongside Neil O’Mara to give the visitors a solid look at the back, something which allowed them to push on and plunder that thunderbolt of a third goal.

They may have been two goals up, but Thomastown had to work to defend their lead. Dempsey showed as much, making a vital tackle to stop Simon Burke. Tony Delaney took the resulting corner, firing in a ball which Lee Delaney met with a storming header at the back post, but his 30th minute effort flashed over.

Callan kept that high tempo going, pressing hard for a way back into the game. Paul Dunne did well to foil Lee Delaney, leaving his line to smother the ball at the attacker’s feet in the 39th minute, but he couldn’t stop Callan from halving the deficit in the dying seconds of the half.

In a move that flowed from back to front Callan attacked in a red and black wave. Egan’s ball was held up well by Lee Delaney, before Robbie O’Brien’s clever flick allowed Simon Burke to steer a low shot into the bottom left corner.

That goal set the game up nicely for an enthralling second half, but try as they might Callan couldn’t break Thomastown down.

They laid siege to the visitors - there were some half-chances for Simon Burke that came to nothing - but even with the man disadvantage Thomastown stayed calm, grinding their way to the three precious points .