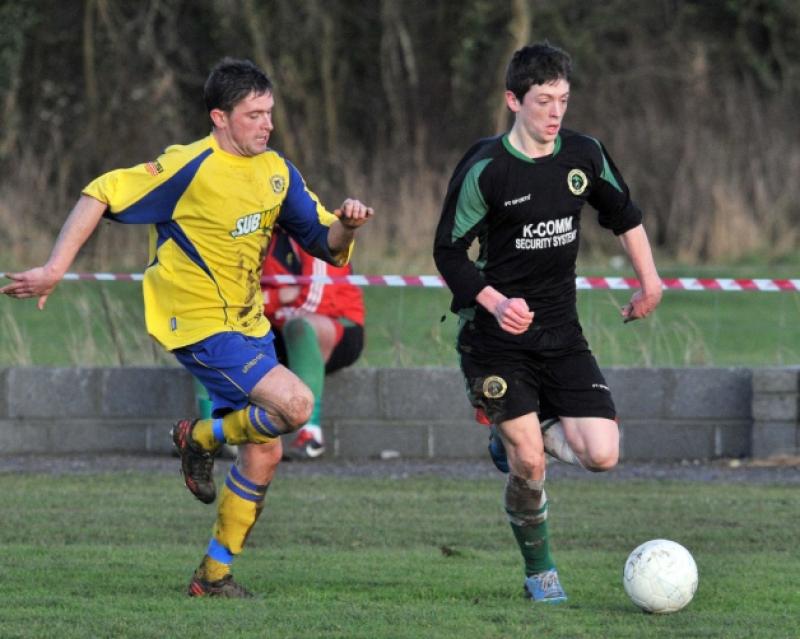 Having scored success at home and away Freshford Town’s incredible run this season shows no signs of coming to a halt.

Having scored success at home and away Freshford Town’s incredible run this season shows no signs of coming to a halt.

Already safely through to the last 16 of the Leinster Junior Cup, and leading the race for the Division Two title, Town kept their name in the hat for another piece of silverware.

Better yet, they took out a North Kilkenny rival in the form of Spa United as they moved into the final four of the Maher Shield, scoring a 5-1 win over their near-neighbours on Sunday afternoon.

Freshford were given the lead thanks to a Paul Guinan penalty, but were hauled back when James Whelan netted from 12 yards for Spa, who are currently top of the Division One table.

Undeterred, Freshford went back on the attack and restored their lead through teenage striker Eoin Vaughan. They could have doubled that lead before the break when Guinan was presented with a second penalty, but he failed to hit the target.

The second half saw Freshford atone for that spurned opportunity however, as they took control of the game. Further goals from Vaughan and James Kenny pushed them well clear of their rivals, before Philly Russell made sure of their berth in the semi-finals.

Vaughan did have a chance to complete his hat-trick late on, when he was given the penalty-taking duties, but he had to settle for a brace after missing his kick.

Freshford joined Evergreen A in the semi-finals, but the two sides will have to wait and see who will join them there after weather forced the cancellation of the remaining quarter-finals.

The tie between St Anne’s and Highview Athletic fell by the wayside on Saturday, while the all-Premier Division meeting of Newpark A and Lions A was called off after failing a pitch inspection on Sunday morning. Both games have been rescheduled for this weekend.

Evergreen B’s first league win of 2014 helped them moved into a safe spot in the middle of the Premier Division, but they may have hit Fort Rangers a deadly blow.

Fresh from their 0-0 draw with table-toppers Freebooters A, Evergreen maintained their form with a 4-1 win in Wallslough.

Mark Cashin was a thorn in the side of older brother and Fort boss Jim as he scored twice for the ’Greens, who also had goals from Mark Owens and Ronan Holohan.

The result means Fort are now five points adrift of Lions and East End United A, although both sides have played one game more.

Fort, who haven’t won a league game since their 4-2 victory over East End in October, will be hoping they can somehow evade the drop.

With five games left they’ll be hoping to pick up points at away ties against fellow strugglers East End and the Lions, as well as in their remaining league games against Freebooters A (away), Evergreen A (home) and Newpark (H).

The race for the Division One title is close, with just a point separating Spa United and Callan United – but things are just as tight behind the top two.

Clover United made sure the table had a constricted look to it after they beat Stoneyford United 3-2 on Sunday.

Clover’s win, built on goals from Steve Finnan (2) and Enda Maher, saw them move on to 15 points – the same as Tullaroan. They are now a point behind Newpark B, and trail third-placed Southend by two points (17).

The news is not so good for Stoney, who have only won two of their dozen games to date. Although they are only a point behind thrid from bottom Deen Celtic, they have played four games more than the Castlecomer men.

There was only one game in Division Two, where Evergreen C made it a clean sweep for the city club’s junior sides thanks to a 5-2 win away to Bridge United B.

Craig Eardley, Jack McAuliffe, Colm Walsh, Sean Lowry and Eoghan Connolly all hit the net for the ’Greens, who moved level on points with leaders Freshford Town, albeit having played five games more.

Meanwhile the Kilkenny & District League found out who they’ll face in the quarter-finals of the Oscar Traynor Trophy after the AUL beat Limerick Desmond 2-0 on Sunday.

The AUL, who are gunning for a fourth successive title, took the lead with a Derek McCabe penalty on 65 minutes, doubling their lead soon after through Dean Carpenter.

While Kilkenny earned a bye in the second round, Ollie Walsh’s Cats will also have home advantage for the final eight clash with the champions.

The Clare League became the first team to move into the semi-finals when they beat Sligo/Leitrim 2-1 on Sunday. Cork AUL will take on Donegal’s Inishowen League for another berth this weekend.

Dates for the remaining quarter-finals between Kilkenny and the AUL and Kerry League versus the United Churches have yet to be confirmed.

Kilkenny have been boosted by the news that goalkeeper Robbie Lynch is back in training following his leg injury.

They may, however, have to do without one or two other players from their squad. Airtricity League clubs Waterford United and Wexford Youths are believed to be looking at signing local players before the transfer window closes on Friday.