Stars back our girls to shine 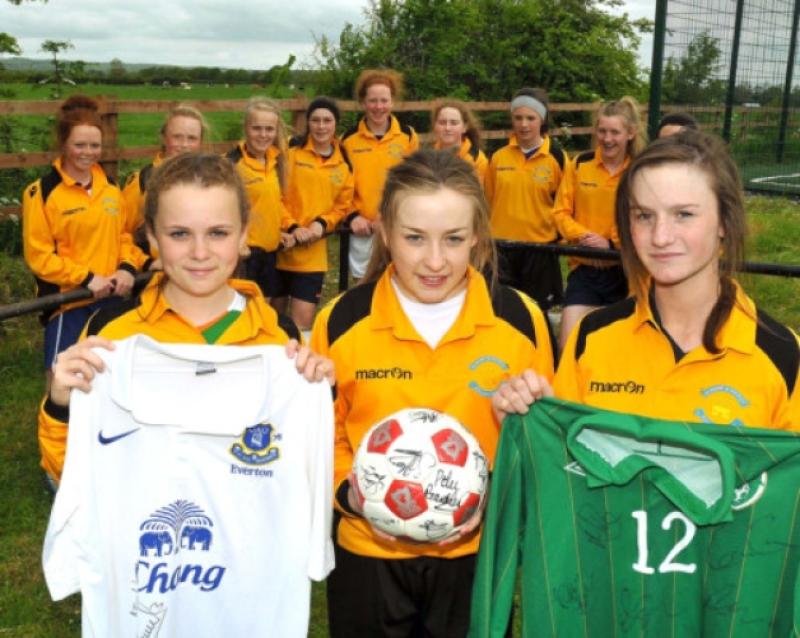 THE CHANCE to score a valuable souvenir and help out a local team - that’s the draw on offer for Kilkenny football fanatics.

THE CHANCE to score a valuable souvenir and help out a local team - that’s the draw on offer for Kilkenny football fanatics.

The Kilkenny girls’ under-16 team are gearing up for this year’s Gaynor Cup competition, but they need the support of the sporting community to achieve their goal, writes Trevor Spillane.

The girls are getting help and support from far and near, including from Kilkenny international soccer star, Michael Drennan and the great Liverpool team from the eighties.

The team will travel to the University of Limerick at the end of the month for the inter-league competition - the girls’ equivalent of the Kennedy Cup - where they will take on Waterford, Tipperary and Mayo in their group games.

Kilkenny boast plenty of talent both in their management and playing ranks.

The side are led by Paul McGinley, a teacher with the all-conquering Loreto school sides. Former Irish international Jenny Reddy is also on board as is Michael Clifford, a Leinster Junior Cup winner with Freebooters.

On the field the Cats are just as imposing.

Among the squad are two Irish internationals. Jenny Clifford was capped at under-16 level by the Republic of Ireland in a series of matches last month - she played against Belgium, Wales and the Czech Republic - while Olivia Nolan featured in the Irish under-15 schools side at the Bob Docherty Cup in Northern Ireland.

The competition is a prestigious event in the girls’ football calendar. As well as getting the chance to win a national title, girls can earn a shot at international recognition as management from the Republic of Ireland teams scout for potential players.

To help the team raise funds for the competition, the Parents’ Committee will hold an auction for a variety of football memorabilia.

Among the items up for grabs are a signed soccer ball from Liverpool 1980s team featuring Kenny Dalglish and Alan Hansen, a signed Luis Suarez photograph and a Leighton Baines-autographed Everton jersey.

There is also an official Irish international jersey signed by Kilkenny’s Michael Drennan and his team-mates from the Republic of Ireland under-19 squad who competed at the UEFA Championship qualifiers in Luxembourg.

Drennan was Ireland’s top scorer in the group stages, helping his country qualify for the Elite Phase competition.

The auction will be held on a Facebook page especially set up for the team. Photos of the items for auction can be seen at the Facebook page, which is called U16 Kilkenny Girls Soccer Auction. Bids can be also submitted to team management or members of the Parents’ Committee.

The Kilkenny girls, who have already held a fashion show and received support from local businesses, will also hold a quiz night in The Kilford Arms on Thursday, June 13. Tickets for the event, which starts at 8.30pm, cost E5 per person.