Elvis and the free-scoring Cats leave Leinster all shook up! 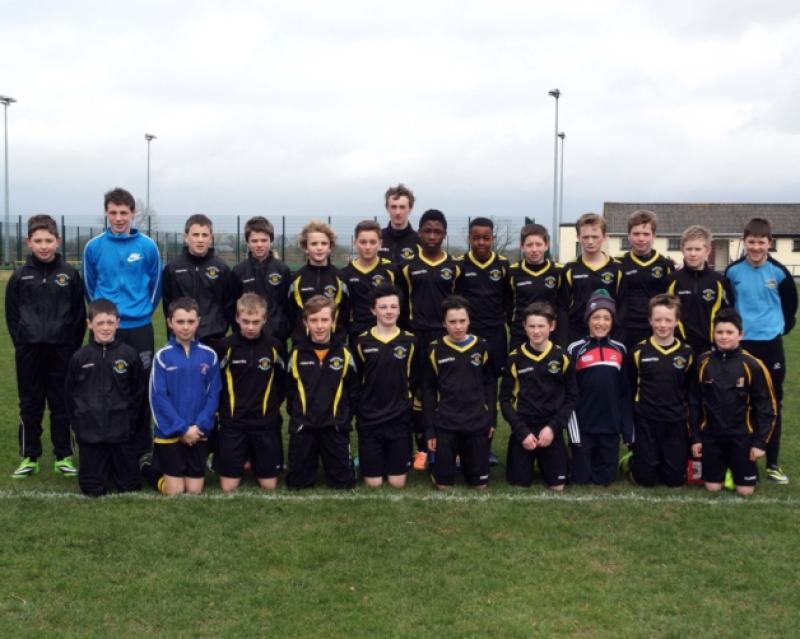 The future of soccer in Kilkenny is alive and kicking. One of the League’s youngest teams proved as much - and in impressive fashion.

The future of soccer in Kilkenny is alive and kicking. One of the League’s youngest teams proved as much - and in impressive fashion.

The Kilkenny & District League’s under-13 side had a weekend to remember as they stormed to the top of the Leinster inter-league table.

The Kittens, under the care of Michael Hoban and Ger Brett, played three games in two days and came away with a 100% record.

They saved their best performance for last, seeing off rivals South Dublin to open up a three-point gap at the summit and book their place in the All-Ireland stages.

There were just seven minutes on the clock when the hosts drew first blood at Derdimus. After going close with a Jack Morrissey volley that clattered off a post, Kilkenny fought hard to push the ball back into the danger zone.

Conor Kelly kept the pressure on, cutting out the Dublin clearance and hoisting the ball back into the box. Morrissey was waiting and made no mistake this time, taking the ball down and slamming it past netminder Darragh Flood.

Kilkenny remained on the front-foot after that, but couldn’t add to their lead. They went close when, after a great move involving Elvis Azah and Morrissey, Ciaran Brennan unleashed a thundering 15th minute shot, but Flood made a stunning save to palm the ball over his bar.

The Kilkenny strike force posed a real threat all weekend. Azah and Morrissey combined for another chance soon after, but Flood moved smartly to prevent his side from falling even further behind.

The netminder had no such luck in the second half. Morrissey doubling Kilkenny’s lead when he seized on a short kick-out and blasted it in at the near post.

Facing a well-marshalled defence led by the impressive George Murphy, Dublin were never allowed to get back into the game. With Jamie Harkin, Conor Kelly and Conor Clarke - who made a good block to deny James Breslin a goal - working hard in front of a confident Cian Rowe, the hosts continued to stifle their opponents.

Kilkenny took a bigger step towards the three points when the dangerous Ciaran Brennan made it 3-0 after 41 minutes. Awarded a free after Morrissey was tripped outside the box, Brennan punished the Dubs with a sweetly-struck shot that arrowed inside the left post.

They had more chances to add to their lead, sub Darragh Quinn flashing a glancing header over the bar on 51 minutes, before they made sure of the spoils 60 seconds later. Superb link-up play between Quinn, Morrissey and Cathal O’Leary ended with Elvis Azah bursting into the box and coolly slipping the ball under the advancing Flood.

It was a fitting end to a weekend which began in devastating fashion for Kilkenny. Opening their campaign against Drogheda the Kittens showed their rivals no mercy, feasting on goals in Saturday’s lunch-time fixture.

Elvis Azah sent the hosts on their way, grabbing a quick brace inside the first five minutes. They made it 3-0 in the 13th minute, Ciaran Brennan drilling a low shot across goalkeeper Hugh Murphy after Jack Morrissey picked him out with a great pass.

On a roll, Kilkenny grabbed a fourth goal after 20 minutes, Morrissey slipping in Azah to complete his hat-trick in devastating style. Morrissey completed the first half scoring spree, converting a penalty after his fancy footwork drew a foul in the box.

Although they were now facing into the breeze for the second half Kilkenny picked up where they had left off. Their best goal arrived on 41 minutes. Brennan showed excellent control to kill the ball and beat defender Ben Mullen on the turn before racing in to smash an unstoppable shot high into the net.

Kilkenny applied the finishing touch with two goals inside 60 seconds. Sub Jamie Holden hammered in a stunning 52nd minute volley, with Cathal O’Leary making it 8-0 after sterling work in midfield by Darragh Quinn.

Kilkenny’s toughest test came in their second game against Wicklow. Played on the Kells Road, they had a chance to go in front within 60 seconds after Brennan was upended in the box. Wicklow netminder Michael O’Reilly guessed the right way to stop the penalty, then saw Brennan hit the post from the rebound.

The hosts found it tough going against a physically bigger Wicklow, but silenced their rivals when Brennan pounced on Azah’s 16th minute cross and finished from close range.

Ringing the changes brought more goals for the Cats. Jack Morrissey ended a sweeping move involving Brennan and Azah to make it 2-0 in the 41st minute.

Brennan grabbed his second after Conor Kelly’s brilliant ball out of defence was threaded into his path by Success Edogun. Brennan wasn’t finished yet, wrapping up the win and his hat-trick when he guided Jason Byrne’s cross home with 58 minutes on the clock.

Wicklow did pull a goal back late on - the only one Kilkenny conceded all weekend - through Keith Carty’s free, but it was too little too late.