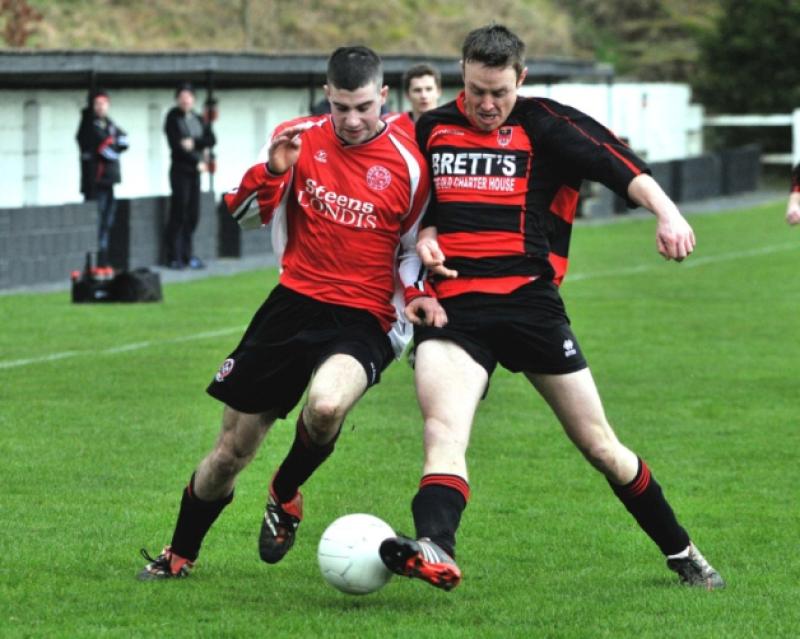 The long journey is over. Callan United have reached their desired destination - the Premier Division of the Kilkenny & District League!

The long journey is over. Callan United have reached their desired destination - the Premier Division of the Kilkenny & District League!

After several years looking on, United made sure they will be dining at local soccer’s top table next season when they secured a precious promotion.

Callan, whose fortunes took a took for the better when they won the McCalmont Cup in 2012, did their part with a convincing 3-1 win away to fellow promotion chasers Deen Celtic.

Their place in the top flight was then secured when Spa United could only draw 1-1 away to Newpark B that afternoon.

It has been a remarkable season for the club, who secured back-to-back promotions thanks to a solid season.

“It was great to get promotion back to the Premier Division,” assistant manager Rory O’Donovan told the ‘People. “It’s great for the players, as they have been the ones who have put in the effort. Now they’ve something to show for it.”

Under the guidance of manager Stephen Byrne and his assistant O’Donovan, Callan have been something of a force in the division, driving their way to the top spot with an impressive run of results in the last few months. With one game to play they are assured of promotion, but can go up as champions if they beat Newpark B in their final game of the campaign this weekend.

That’s something both Byrne and O’Donovan would love to see, as it would give them a great send-off.

“Steven and I are members of the Third Battalion group who will leave James Stephens Army Barracks for Syria on March 30,” Rory explained.

“Our departure date means we thought we might miss the last league game. It’s great that we’ll have it played before we leave.”

United made sure they were in with a shout of grabbing the silverware with an impressive performance in Sunday’s showdown.

With Deen Celtic still in the hunt for a promotion place themselves the scene was set for a tight clash, but it was the visitors who did all the early running.

Making a fast start Callan took control of the game in the early stages, driving into action against a Celtic side who were looking for their fourth win on the trot.

United were sharper from kick-off and made that pressure count when they took the lead after 10 minutes, Robbie Wall heading home from a deep cross.

Stunned by that goal, Celtic tried to regain their rhythm but, before they could, they were two down as Simon Burke doubled the Callan advantage on the half hour.

Conceding the second goal shook Celtic into life. Peadar Boran and John Doheny led the charge but even though they hit the bar the Callan goal survived.

The visitors stepped up the pace in the second half and all but killed the game off within five minutes of the restart. Failing to clear their lines cost Celtic, as Ryan Bergin pounced to force home a loose ball and send his side towards the three points.

The march to the finish line wasn’t totally hassle-free for Callan, as a second half revival saw the ’Comer men pull a goal back through Caleb Roche, but they couldn’t make a full recovery.

The result was a satisfactory one for Callan, with O’Donovan admitting the side knew they faced a tough test.

“It was a great result against a tough Deen Celtic side,” he said. “That was the third time we played them this season and we knew from experience it wouldn’t be easy.

“We thought we had them beat when we led 5-3 in the first league game and they came back to force a 5-5 draw, while we needed extra-time to beat them in the FAI Junior Cup.

“For the opening 25 minutes of Sunday’s game we played as if everything we had trained for came together,” he added. “We knew that Deen Celtic would come at us, but we had a plan in place - everything worked out.”

The celebrations began in earnest once news of the Spa result filtered through, but getting back into the Premier Division completed an incredible comeback for a Callan side who had plummeted to Division Two a few seasons ago.

“Dropping into Division Two was a wake-up call for the club,” O’Donovan admitted. “With respect to other sides, we always felt that Callan was too big a club to stay in that division - we had plenty of good players and now we’re back where we belong. We are a strong club with plenty of young players coming through.”

Incredibly, it was a bad loss which spurred Callan into this season’s promotion charge.

“We have had to dig out some results this season, but losing to Willow Park in the FAI Junior Cup turned our season around,” said O’Donovan. “We lost that game 11-0, which made for a brutally long journey home. However, that loss really motivated the lads.

“Traditionally we’ve put in good runs after Christmas, but there was extra effort this year,” he added. “We knew that Division One was going to be tight. All the sides are capable of taking points from each other so we knew we had to be at our best.”

Their finish to season highlights just how good Callan have been - they’ve taken 16 points from a possible 18, scoring 22 goals in the process. And the hope is that they can improve from here.

“Now we’re back in the Premier we’ll be hoping to push on,” finished O’Donovan. “With more young lads to bring through our squad can only get stronger.”