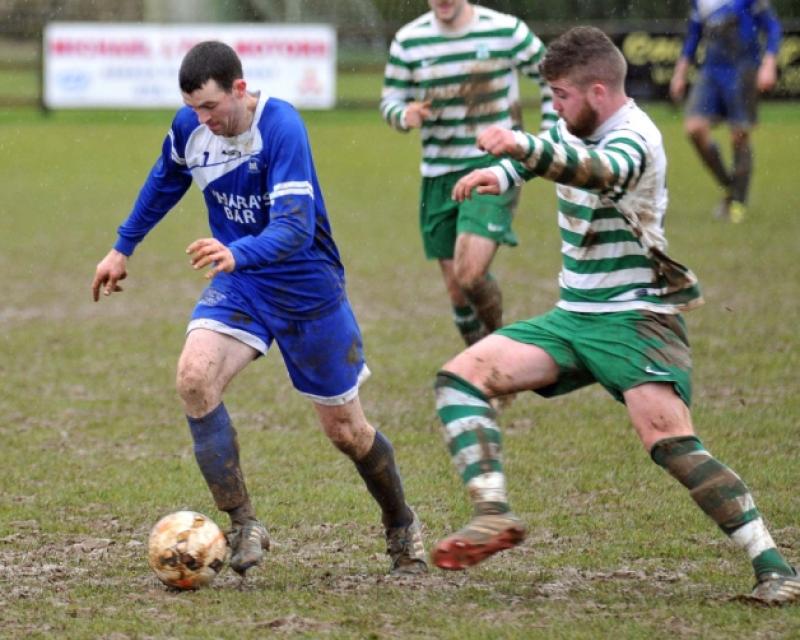 Just as one team are battling to get their hands on the Premier Division title, another showed they won’t give it up without a fight!

Just as one team are battling to get their hands on the Premier Division title, another showed they won’t give it up without a fight!

Thomastown United A are still on course to take the spoils, but Evergreen A showed them that leagues aren’t won too easily.

It took 11 games, but United saw their unbeaten record bite the dust as outgoing champions Evergreen grabbed a hard-earned and hard-fought win at a blustery Kells Road on Sunday.

Brian Jordan’s first half goal was enough to give the outgoing champions a good win against the pretenders to the throne. On reflection, it was a win the hosts deserved - and boy, did they work for it.

It has been anything but a season to remember for Evergreen who, in a stop-start campaign won just one of their opening five games domestically.

However, their year has taken something of a turn for the better. An extra-time win over St Kevin’s Boys has sent them into the last eight of the Leinster Junior Cup, while a resurgence in form of the likes of Sean Barcoe has helped the ’Greens turn the corner.

They proved as much when, despite the tough conditions, they started at 90 miles an hour. Even though the heavy rain before the game - the deluge forced a late pitch inspection - turned the ground into something of a quagmire Evergreen looked fleet of foot.

Fizzing the ball down the flanks at stages, while opting to drive through the centre at other times, Evergreen began the game in offensive fashion. Robbie Quan proved as much, slinging a fast fourth minute ball down the left for Chris Whearty to fire across the goal, but C.J. Browne was there to clear the danger.

Evergreen’s stride seemed to be checked a little when they lost Darragh Walshe to injury inside 12 minutes. Brian Jordan was more than an able replacement, but they had to weather a little storm first, as both Browne and Steven Connolly saw close range shots ping around the Evergreen box after they kept Mick O’Neill’s corner in play.

Jordan proved a great addition to the game. His bustling play giving Thomastown some real headaches, the first of which came after he linked up with Sean Barcoe on 21 minutes. A neat one-two gave Jordan room to strike at the edge of the box, but Derek Brennan was across to make a telling tackle.

He had no such luck when Jordan’s next move led to the game’s only goal eight minutes from half-time. Seizing on Niall Andrews’ header, Jordan controlled the ball on the left corner of the box and withstood Brennan’s sliding challenge.

With the Thomastown defence preoccupied with keeping tabs on Chris Whearty, Jordan saw a gap open up and went for it. Cutting in, he drew Paul Dunne from his line before clipping a low shot inside the netminder’s left hand post.

It was a goal the game craved, but it was almost followed soon after by another at the other end. Pouncing after Dessie Walsh’s stooping header was half-cleared Derek Brennan tried his luck with a powerful strike from the edge of the box, but a blanket defence thwarted his effort.

The cold conditions mattered little to the teams as Thomastown took the game to their rivals in the second half. They wasted little time in showing their teeth, none more so than Dessie Walsh. Pushing forward for Mick O’Neill’s 47th minute corner, Walsh found a gap in a sea of players to get on the end of the cross, but his header spun wide of the left post.

The extra offensive attention meant Evergreen’s attacks were limited after the restart, but when they got forward they weren’t helped by the elements. Ciaran Snype thought he had been presented with a gilt-edged chance when Sean Barcoe’s clever flick-on left him to charge down the left and into the box but the ball got stuck in a watery patch, giving C.J. Browne time to get across and make the tackle.

The addition of Snype, a half-time sub for the injured Robbie Quan, worked in Evergreen’s favour. His next involvement on the left with Brian Jordan, ended with a teasing cross Paul Dunne had to claw out from under his bar. Chris Whearty looked all set to finish the rebound, but somehow Thomastown escaped.

The visitors used that let-off to press on and almost found an equaliser. Neil O’Mara was the provider, whipping the ball back in after Browne’s 64th minute free was half-cleared, but although O’Neill did well to make space for the shot he lifted his effort over the bar from 10 yards out.

With both sides pressing for more goals the game began to open up. Ben Hickey had a great chance to double Evergreen’s lead when slipped through by Brian Jordan’s clever pass, but he dragged his 65th minute shot wide of the far post.

It was Thomastown’s turn to go back on the attack after that. They went close - really, really close - to getting back on level terms when Packie Holden punched O’Neill’s corner away from danger but it only reached C.J. Browne, who let fly with a searing strike from out on the left.

The ball arrowed towards the inside of the far right post - it seemed destined for the net - but Tommy Earls cut short Thomastown’s cheers with a goal-line stop.

It was Evergreen’s turn to stop a few hearts after that. Barcoe went within a whisker of hitting the net when he slid in at the back post to connect with Chris Whearty’s 78th minute corner, but Paul Dempsey was there to clear the ball before it crossed the line.

The final quarter saw Thomastown go all out in an effort to get a point, and to protect their unbeaten record. They provided Evergreen with a real test - Snype dashed back to make two great clearances while Dylan Whearty made an excellent tackle - but they were really tested in the closing stages after losing not one but two players to red cards.

The battle to stay in front got tougher when Dylan Whearty was dismissed for a second yellow four minutes from time. Sean Barcoe followed him into the dressing-room two minutes later - neither for malicious challenges, more mistimed on a difficult pitch - but still Evergreen held firm.

That’s not to say Thomastown didn’t go close to snatching a share of the points. On another day Dessie Walsh’s 88th minute header would have gone in and Andy Kavanagh’s acrobatic kick would have hit the net and not the body of Jason Quan - but not this day.