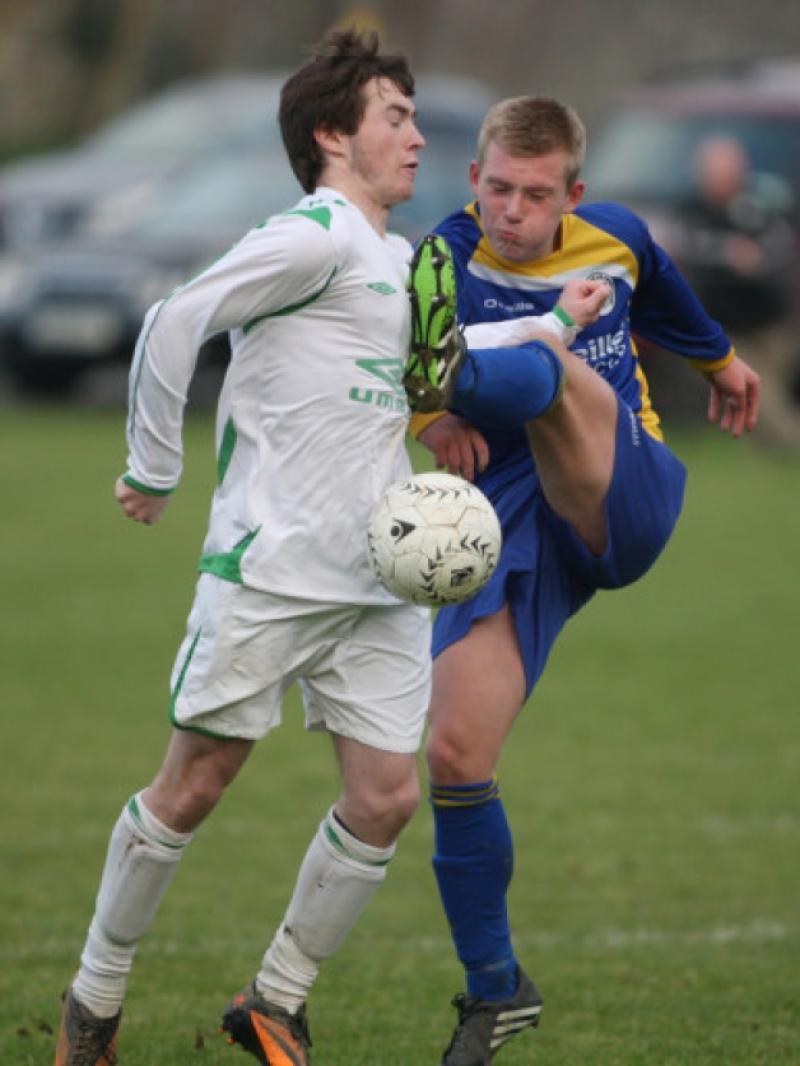 A strong finish saw Evergreen’s Youths power past Wexford’s Moyne Rangers and race into the last 16 of the FAI Youths Challenge Cup.

A strong finish saw Evergreen’s Youths power past Wexford’s Moyne Rangers and race into the last 16 of the FAI Youths Challenge Cup.

Opening against a gale-force wind Evergreen started strongly in Ferrycarrig, creating a number of chances in the early stages.

Darby Fwamba was very lively in the opening period for the visitors, going close with a searing shot after good combination work with Eoin McGovern.

The hosts were stunned, as the Evergreen midfield of McGovern, Robbie Buckley and Drennan took the upper hand, making sure their side maintained control and continued to make chances for Ben Hickey and Coffey.

As the first half progressed Moyne Rangers regained their composure and fought back into the game. Enjoying a good spell of possession, Moyne thought they had found a route to goal when they broke through the Evergreen defence on the half hour, but a last ditch tackle from Gaby Lapuste saved the day.

The danger wasn’t fully clear as, from the resulting corner, netminder Aidan Hynes had to make a smart save from a point-blank header to keep the ’Greens in front. With resolute defending from Mark Slater and Robbie Hennessy, Evergreen finished the first half with their lead intact.

The Kilkenny side had the breeze at their backs for the second half, but the wind was taken out of their sails on the hour when Dillon Redmond finished a quick counter-attack and equalised with an excellent goal.

The game was delicately balanced at that stage, Moyne playing good football from the back against an Evergreen side who found it tough to turn their pressure into chances given the weather.

The visitors went close when flying full-back Tim Cummins teamed up with Ronan Coffey to create a chance for Hickey, but his 65th minute shot was well saved by the Moyne ’keeper Dylan Cloke.

Evergreen kept attacking, and saw their pressure pay off when Hickey set up Robbie Buckley to fire home a marvellous shot from outside the box with 75 minutes on the clock.

Moyne continued to play good football and, following an error in midfield, they got back on level terms when Darragh Pepper fired an unstoppable shot past to the net.

Despite being hauled back for a second time, Evergreen refused to panic. With his passing becoming a telling factor, Niall Brennan played a ball through to Hickey, who set up Buckley to fire home an unstoppable shot from the edge of the penalty box.

With five minutes remaining Moyne pressed for an equaliser but the Evergreen defence stayed strong and held out for a deserved victory.