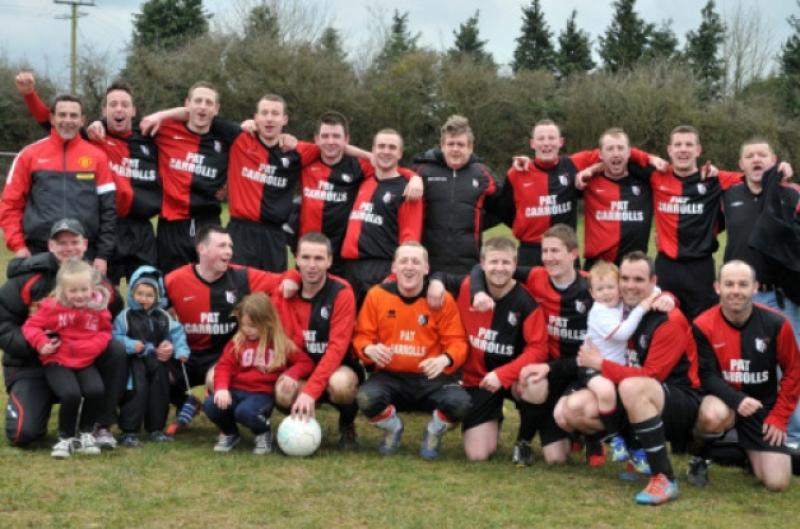 THE JOURNEY is over - Newpark A are back in the Premier Division!

The tears from last year were turned into cheers as the city side wrapped up the title in hard-fought fashion, beating trophy challengers Southend United in a tough game on Sunday morning.

Tommy Donovan played a captain’s part, ghosting into the box to glance Henry O’Neill’s 77th minute free to the net and spark some scenes of wild celebration on the sideline.

Newpark A are now four points clear with just one game to play, meaning they can’t be caught at the summit.

Twelve months ago the city club were riding high on three fronts as the season drew near an end - Newpark were chasing the league, McCalmont Cup and Division One Cup - but they ended their campaign empty-handed.

It has been all change in 2012/13, as they have tackled the league in determined fashion. They have lost just one league game on their way to the title - a 2-1 loss at home to East End United A the only blot on their copybook - a run which kept them well in the hunt throughout what has been the most competitive division in the league.

However, they had a few scares to contend with along the way. That loss to East End was followed by a solid 3-1 win over Urlingford, but a 3-3 draw with AC Kilkenny A ensured both Southend and East End were still in the hunt for the silverware. A 2-0 win over Stoneyford on St Patrick’s Day put them back in the driving seat however, leaving everything delicately balanced for Sunday morning’s clash in Ballyhale.

It was almost Newpark on tour on Sunday as friends, family and supporters - not to mention club-mates from the Newpark B team - travelled South to take in the make or break game.

The message was simple for both sides: win, and the dream of winning the title was still alive. It carried more weight for Southend, who needed the three points to return to the top of the table, a place they had called home for most of the season until they suffered a 2-0 St Patrick’s Day loss to East End.

As a result, it was no surprise to see both sides make a nervy start to the game, although neither was helped by the chilly conditions and a gusty wind that almost blasted the teams into submission.

Many could have expected Southend to seem a little rusty from the start - their 0-2 loss to East End was their only league game in a six-week period - but they were determined to make home advantage count. They almost made it pay off as early as the fourth minute, when midfielder Richie Cahill picked off Bobby Maher’s kick-out in midfield and sped towards goal. A quick lay-off saw Dan O’Brien work the ball across to Joseph Gahan, but Tommy Comerford raced back and nipped in to make the tackle before the winger could pull the trigger.

The visitors adapted well to the conditions, playing with five across midfield as they sought to fight against the wind. They took a firm grip on the middle third - they needed to, as Southend persisted with a high ball tactic that kept play billowing towards the Newpark goal.

With so much at stake it wasn’t surprising to see both sides play a cagey game, almost waiting for the other to make a mistake. Southend’s next opportunity to threaten didn’t come until close to the half hour, when Padraic Gahan got a wicked flick on a dangerous Joseph Gahan cross at the near post, but Stephen Dawson got enough on the ball to divert it behind.

Newpark had to wait even longer for their first sight of the posts. Good work by Ger Wall helped them win possession in midfield and advance, but although Tony Delaney’s long range strike took a wicked deflection goalkeeper Eddie Walsh was well placed to comfortably hold on to the ball.

Sensing the game was there for the taking, both sides upped their efforts in the second half. Newpark were the first to threaten, as Tony Delaney headed Henry O’Neill’s 51st minute free-kick across target. The ball dropped at the feet of Shane O’Neill, but he clipped his shot just wide of the mark.

The agony was Southend’s just a few minutes later. Great work through the centre saw Paul Shefflin put Darren Fitzpatrick on the ball in the box but he was grounded through a last ditch tackle. Although they appealed for the spot kick Southend were given the advantage as the ball bobbled across to the unmarked Padraic Gahan, but while he put his shot beyond the grasp of Bobby Maher the ball rolled outside the far left post.

The sides took the game up another notch again, with Darren Fitzpatrick and John Hayes each having a crack at the target. Hayes went closer, using the wind to whip a 58th minute in towards the near post from out on the right wing, but Eddie Walsh got down smartly to make the save.

Newpark kept pressing and almost turned that pressure into the opening goal. Tony Delaney got a whiff of a chance when Shane Kelly’s attempted header back to his own netminder fell short. The striker latched on to the loose ball and sped through on the left, but keeper Walsh did well to push Delaney wide, narrowing the angle sufficiently to send the ball crashing into the side netting.

Southend sensed they were under the cosh and hit back. Piling forward for a 67th minute corner they almost made the breakthrough when Joseph Gahan arched his body to get on the end of a looping high ball and crack it goalwards but Bobby Maher made a super save, getting a strong hand on the shot to push it on to the bar from point-blank range.

Newpark paid attention to that scare in the right manner - their next chance led to the only goal of the game. Awarded a free just beyond the centre-circle Henry O’Neill’s floated delivery was inch-perfect for skipper Tommy Donovan, who found just enough space to glance the ball inside the left post.

The strike flattened Southend’s resolve and galvanised Newpark, who were determined not to let the lead slip from their grasp in the closing 15 minutes.

While their defence did well to shut up shop at the back the midfield and forwards worked hard to keep the ball at the other end of the pitch. Sub Sean Falsey had two late chances to extend the lead - the first a shot which whistled wide of the mark, the second a 90th minute drive which Walsh did well to hold - but in the end it didn’t matter. That one goal was enough to book their return to the top flight.

Southend might be down after Sunday’s defeat, their second in succession, but they are still not out of the promotion race.

With one game left to play they’ll have a final bite at the cherry to go up this season. United are level on 30 points with East End United, meaning a place in the Premier Division is still in the melting pot. Southend will have a home tie against relegation-threatened Urlingford, while East End will host AC Kilkenny A, a side secure in a mid-table berth.