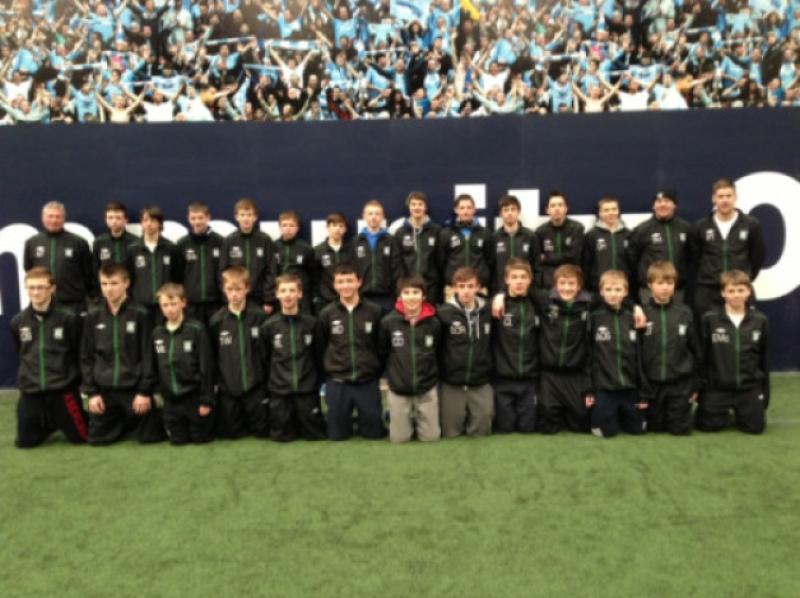 IT WAS an egg-cellent Easter for one group of local soccer players, who enjoyed a cracking trip to England over the school break.

IT WAS an egg-cellent Easter for one group of local soccer players, who enjoyed a cracking trip to England over the school break.

The Evergreen under-15s made their annual pilgrimage to the home of Bolton Wanderers for their Train & Play tour. The party left Kilkenny in the early hours of Good Friday, the 33-strong panel heading to Holyhead for the first leg of their feast of football.

The 25 players and eight accompanying adults, including managers Peter Henebry, Noel Tuohy and Peter Tierney, tackled three two-hour coaching sessions which were overseen by Bolton Wanderers FA coaches at the Bolton Arena in the shadow of Bolton’s home Reebok Stadium.

Following a private tour of the Reebok Stadium, the group made the short trip to the DW Stadium to watch the Premier League clash between Wigan Athletic and Norwich City, where the travelling party were treated to great displays from Republic of Ireland internationals James McCarthy and Wes Hoolahan.

The busy weekend continued on Easter Sunday, when the group moved on to Platt Lane City, Manchester City’s Academy. Both Evergreen teams gave an excellent account of themselves, taking on local sides Platt Lane City and Stretford Vics in friendly matches.

The trip was rounded off with an evening at the Trafford Centre, before the tired but happy group arrived back in Kilkenny on Easter Monday.