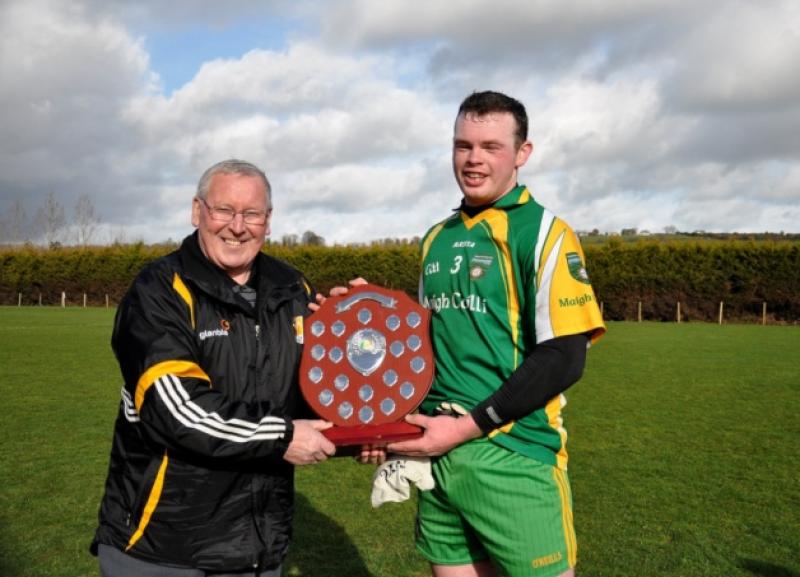 In a tight first half in the senior football league final, Colin McGrath got reigning champions Muckalee off to a flying start with a pointed free after only 90 seconds when newcomer Brandon Sheehan was fouled, by Pado O’Flynn.

McGrath was involved again when he won possession after six minutes before scoring a fine point. He quickly followed with another point to give his side a great start.

The Railyard’s first score arrikved in the 9th minute when Ronan Walsh pointed from an acute angle. James Maher responded with a point. The losers took over, and with Phillip Roche inspiring they began the fight back with a point after some intelligent play.

Points followed from Caleb Roche and Ronan Walsh before Roche kicked his first point from play. That put the Railyard ahead for the first time. A late first half surge saw points from Mick Morrissey and Brian Byrne to help Muckalee into a 0-6 to 0-5 lead.

Many were expecting the exchanges in the second half to be just as tight. Instead, fans were treated to an exhibition of football by Muckalee, the four time county champions. They scored 2-3 without reply during a dazzling display.

McGrath kick started the drive to victory with a pointed free. Brandon Sheehan then found Ollie Walsh with a fine pass. The latter switched possession to ace marksman McGrath, who buried the ball in the roof of the net.

Shane Coonan and James Maher added quick points. Patrick Brennan had a hand in both before McGrath ended the game as a contest when he scored a goal from a penalty after Sheehan had being fouled.

Railyard did fight back and they had a goal from Michael Farrell and a pointed free from Caleb Roche. However, the game was beyond rescue.

Both sides have work to do ahead of the championship. Muckalee would have been happy, particularly with the contributions of Ollie Walsh, Brian Byrne, Noel Darcy and Brandon Sheehan whilst McGrath led the Railyard defence a merry dance. Best for Railyard were Caleb, Phillip and Paul Roche and Kevin Phillips.