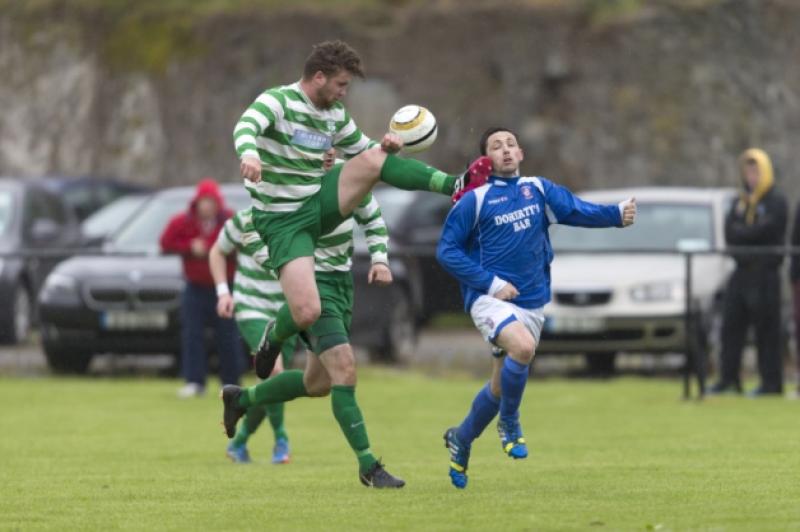 The race for the Premier Division title will go right to the wire this season as the top two collide in a winner-takes-all clash.

The race for the Premier Division title will go right to the wire this season as the top two collide in a winner-takes-all clash.

A season’s worth of hard work will pay off or count for nothing when city rivals Evergreen A and Freebooters A meet in Sunday’s Premier Division play-off at Derdimus (3pm).

For the first time in seven years an extra game has been required as the race for the silverware went beyond the last lap. ’Booters were in pole position in recent weeks, but Evergreen have closed the gap on their rivals to draw level at the top of the table.

After Freebooters missed the chance to snap up the league, drawing 0-0 with their Kells Road rivals, a 5-0 win over Thomastown United A and a walkover from East End United A means Evergreen have an extra opportunity to secure the title.

It’s a chance they won’t take lightly - but they know their rivals are thinking the same way.

“This is going to be a massive game for both sides,” Evergreen boss Eddie McEvoy told the ’People. “It’s been a tough league - both sides have only lost one match each - and we’ve had some difficult games against each other.

“Everybody is ready and looking forward to the game,” he added. “With a lot at stake nothing will be won easily.”

The feeling is the same in the blue half of the city, as Freebooters A try to prevent their great rivals from retaining the crown for the fifth season in succession.

“Games between these two teams are always tight,” said Blues boss Anthony Hanney. “That’s no surprise as the sides know each other inside-out.

“Evergreen got the better of us early on in the season,” he added.

“I felt they caught us cold in the first league game and again in the Shield, but we have been better in the last two games. We beat them on penalties in the McCalmont Cup semi-final and kept a clean sheet in the final Premier Division game. This play-off game is going to be exciting.”

That first meeting of the campaign, back in the early days of the season, showed just how tight things are between the top two. A brace of first half goals from David Grincell sent Evergreen on their way, but Donal Brennan’s second half penalty save kept Freebooters in the game.

A late goal from Dessie Hayes gave them hope, while red cards for Jamie Owens and Damien Kelly (Michael Falsey was also dismissed for ’Booters) certainly added to the drama, but Evergreen didn’t let the result slip.

That loss might have scuppered the hopes of some sides but Freebooters bounced back in style. They won eight league games in a row after that, a run which was only stopped by a 0-0 stalemate with Evergreen B in January.

By that stage the Blues were top of the table, a position they cemented with further wins over Fort Rangers, East End and Newpark A before they drew with Evergreen A in their last game of the season.

As for the champions, the victory at the Fair Green was followed by wins over East End and the Lions, but their 1-1 draw with Newpark A at the start of September was their last league game for some time - they didn’t play a Premier Division game again until December 29, when they beat clubmates Evergreen B 3-2.

The five games they contested in that gap allowed Freebooters to make a move for the title, but Evergreen began to reel them in. A 1-0 loss to Thomastown United A in January was the only blot on their copybook this season, as they put five wins back to back before the stalemate with the Blues in the middle of May.

Sunday’s game won’t be the first time that the sides have faced into an extra game to determine who makes off with the silverware. In fact, Freebooters were the last side to win a title via a play-off game. They beat Evergreen in a closely-fought game in Castlecomer back in 2007, striker Greg Morton scoring the only goal in the 1-0 win.

“We put a late run of results together to force that play-off,” recalled Hanney, who was at the heart of the Blues defence that day with Michael Falsey.

“Evergreen won the last four league titles but they haven’t had them easily,” he continued. “We were three points behind last year, two the year before that and one point the season before that again.

“It just shows how tight things are,” he said. “Lose more than one game and you’re almost out of the race.”

If that’s not enough to whet the appetite, then the promise of a cracking game between the league’s two best sides should ensure a bumper crowd turns out.

“It’ll be brilliant for the neutral,” finished Hanney. “They will be hoping to see plenty of goals, but whatever happens it’s going to be very exciting.”