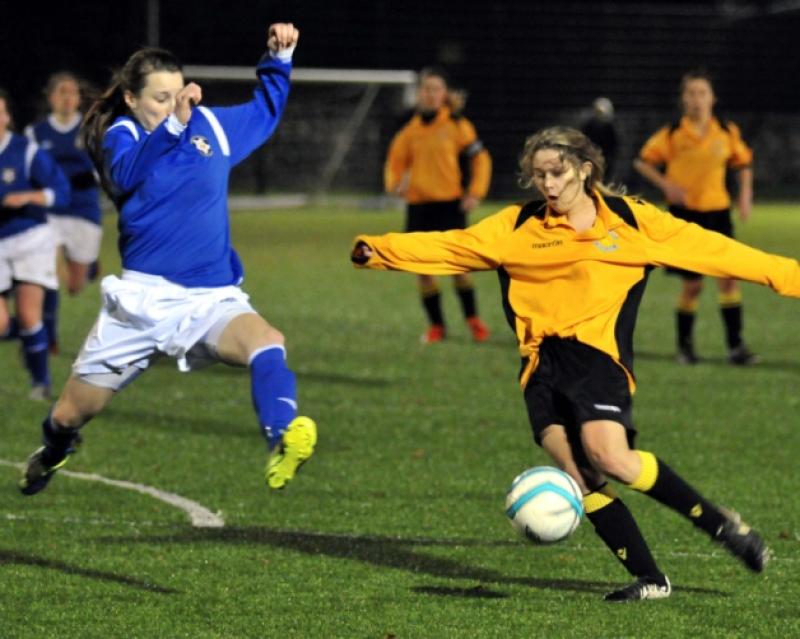 Patience, determination - and a little luck - helped champs Kilkenny make a winning start to the defence of their Leinster women’s title.

Patience, determination - and a little luck - helped champs Kilkenny make a winning start to the defence of their Leinster women’s title.

The Cats had to work hard, but their steely character saw them turn the lights off on Carlow at Carlow IT’s all-weather pitch on Friday.

Niamh Bolger had a tough evening of it, the central defender having to deal with the twin threat of Niamh Power and Catherine Dempsey, but turned match-winner when she got on the end of Jenny Brennan’s menacing corner and powered a header inside the left post.

“We got the break we needed with the first goal,” said a happy manager Fran Egan who, along with David Doyle, brought a youthful Kilkenny side to the game.

“We thought a draw might be good enough to take from Carlow, but these girls have no fear - they pressed for that winner.”

The goal marked the end of a busy evening for the Cats. Carlow, a physically bigger side than the visitors, attacked from kick-off but were lucky not to concede an early opener as Kilkenny made some clever moves on the counter.

They went close to grabbing a fourth minute lead, when Breda O’Neill was tugged back on the edge of the box after her pace split Carlow’s central defenders. Skipper Jenny Brennan took the free, but curled her shot just over the bar.

Carlow settled into attacking mode after that, but much to Kilkenny’s relief the hosts couldn’t make their efforts count. Niamh Power, a real threat all evening, had the best of the home side’s efforts.

Her first attempt came after Bolger scuffed an attempted clearance, but the striker’s half-volley was well held by Kilkenny netminder Trish Mullally.

Power could and should have done better when she found space in the box to get on the end of Leanne Tumelty’s powerful eighth minute corner, but somehow she put her header over the bar from six yards out.

Kilkenny went back on the attack after that, but couldn’t get that last touch needed to take the lead. Breda O’Neill led the attack, picking up Jemma Komar’s left wing pass and driving forward but she delayed her shot, giving Carlow time to deflect her effort out for a corner.

Even though Carlow had an imposing-looking defence, Lauren Valentine wasn’t bothered. The teenage striker gave her all, a point she proved when she chased down a lost cause and beat Carlow netminder Megan Walsh in a battle for possession. Play was worked back to O’Neill via Komar’s pass, but her 22nd minute shot went wide.

Carlow, who posed most of their problems with deep aerial moves, finally took the lead via one of their troublesome set-pieces. Nicole Dowling’s 36th minute free, floated in from the half-way line, wasn’t cleared by Kilkenny, who were punished when the unmarked Catherine Dempsey got her head to the ball, looping it into the net.

The goal spurred Carlow on, leaving Kilkenny almost waiting for the half-time whistle. Trish Mullally had to look lively to stop a Niamh Power shot, set up by another Nicole Dowling free, while last-ditch defending denied both Power and Catherine Dempsey clean strikes at goal from inside the box.

At that stage things looked ominous for Kilkenny, but a switch at the break brought a change in form. The introduction of Olivia Nolan at full-back was a telling point, as she brought extra steel to the back four and shored them up.

That confidence quickly worked its way forward. Mart Clair Kelly had to look lively, hooking a Jenny Brennan corner off the line after ’keeper Megan Walsh spilled the delivery. Lauren Valentine went even closer, after her blistering pace took her clean through down the right, but her venomous 52nd minute shot clattered off a post.

Carlow had been under the cosh since the restart, but should have put the game to bed when they broke with a swift counter on the hour. Skipping past Nolan’s tackle, Chloe Ryan worked a one-two with Niamh Power before bearing down on goal, but she blasted wide when the target was at her mercy.

Kilkenny went back on the attack after that, driving forward in search of an equaliser. Olivia Nolan was a whisker away from connecting with a teasing Jenny Brennan cross, while another Brennan corner fizzed across goal on 77 minutes, the ball begging for the slightest touch to turn it in.

Kilkenny added more youth to their attack in the final quarter, with Becky Walsh and Ria Lawson coming into the fray. Walsh showed great bravery and pace to chase down a long Niamh Bolger free, coming off second best in a juddering clash with Megan Walsh, a challenge many felt should have brought a penalty for the visitors.

That little bit of luck Kilkenny needed finally came in the 83rd minute.

Once again Walsh’s bravery was to the fore. She watched as another Bolger clearance over the top bounced her way and went into another tough challenge with Megan Walsh on the edge of the box, but the Kilkenny teen got her reward as her header spun into the net.

That goal was fully deserved - but Kilkenny still had time to grab one more.

“I thought the game might end in a draw, but what a goal that was from Niamh to win it,” said a delighted Egan. “It was a tough result, but that puts us in the driving seat in the group.”