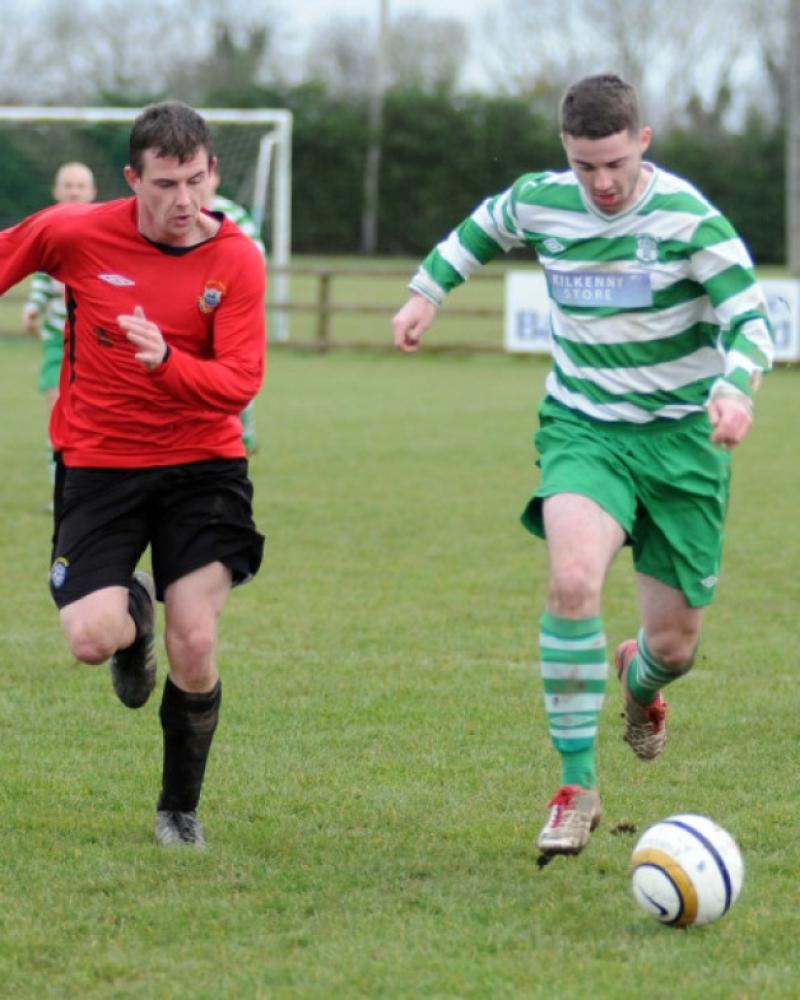 A week after Fort Rangers shocked Gorey in a 10-goal thriller, New Ross were handed a big beating in the FAI Junior Cup by the Premier Division champions.

Just like last week, there were goals aplenty. Unlike the Wallslough decider however, there was never any chance of Evergreen coughing up a big lead.

It took the hosts just nine second half minutes to burst the bubble that Celtic’s comeback hopes rested on.

Winger Chris Whearty did the damage, driving through the centre of midfield before laying the ball off to Brian Jordan and then racing on to the return pass. Clipped by a tackle, Whearty stumbled but regained his footing before releasing a daisy-cutter that zipped towards the far post.

Goalkeeper Aaron Deegan was caught out, hesitating as if certain the ball was going wide. The plan backfired, as the shot found the inside of the bottom right corner, completing a 38-minute hat-trick for Whearty.

The goal left New Ross facing a three goal deficit (4-1), but even with time on their side they looked flattened.

Evergreen looked good for that lead, fizzing into action inside two minutes when David Grincell let fly with a low curling shot that netminder Deegan had to move smartly to get behind.

He had no such luck two minutes later. Breaking down the right Grincell delivered a deep cross which sailed into the box. Arriving at the back, Whearty controlled the ball and drilled it across the six-yard box, with the inrushing Brian Jordan making no mistake from close range.

Evergreen grew in stature with that goal, but were shaken back to reality when a hurt New Ross almost struck a quick reply.

A slight lapse at the back almost saw Evergreen come a cropper, as first they failed to clear a New Ross free and then gave Michael Grangel time to take a touch and slip the ball past his marker.

Left inside with an inviting goal, Grangel looked certain to score, but Pierce Dargan made a great save, staying big long enough to divert the striker’s shot away from danger.

The Wexford men were still in the hunt for an equaliser, going close with a Diarmuid Roche snapshot that flew over the bar on 11 minutes, but their task became tougher when Evergreen doubled their lead before the end of the first quarter.

Given time to take the ball down on the right, full-back Tommy Earls carved New Ross open with an angled ball into the box. The visitors fell asleep, failing to pick up Whearty as he cut across from the left flank. A deft first touch killed the ball, before more neat footwork took him around Deegan before he finished from an acute angle.

Again, the confidence was coursing through Evergreen after that goal, but their nerves began to jangle when New Ross pulled a goal back midway through the half. It was Evergreen’s turn to switch off that stage, the hosts failing to deal with Grangel as he powered a header inside the top left corner from Paul Phelan’s free.

Sparked into life by that goal New Ross came into the game, finding space to run through midfield, but they couldn’t get the better of a Niall Andrews-marshalled defence.

With just six minutes left New Ross must have felt they had weathered the storm, but they were about to be thunderstruck. Moving out to the touchline to pick up Earls’ long ball, Brian Jordan took two defenders with him. Spotting the gap inside, Jordan’s clever ball left Whearty with an acre of space to run in to.

With no defender left to challenge Whearty, Deegan had to race from his line to try and close down the shot, but was left red-faced when the winger delivered a deft lob that sailed into the net.

The half-time break did little to check Evergreen’s stride, as once more they picked up from where they had left off. Within two minutes Sean Barcoe won a high ball which dropped in Jordan’s path. Panic spread through the New Ross ranks but Jordan, caught in two minds about whether to chip the ’keeper or blast the ball past him, scuffed his shot which went out for a corner.

Pushing on, they almost had fourth when lovely link-up play between Grincell and Whearty split the visitors wide open once more. Whearty cut into the box, rolling the ball into Jamie Owens’s path, but his stabbed shot was deflected wide.

Memories of those misses were wiped away when Whearty completed his hat-trick soon after, but Evergreen weren’t content to sit on their lead.

They almost stretched their advantage to four within seconds of Whearty’s third after Owens was slipped through on goal but his shot was pushed to safety by Deegan.

The danger wasn’t over as, from the resulting corner, Grincell powered a header inside the left post, but a Celtic defender was on the line to make a timely block.

Pressed into top gear, Evergreen made it 5-1 with more than half an hour to play. This time they got the right result from a set-piece as Niall Andrews flicked a Jamie Owens free over the Celtic defence and towards the inside of the far post. The ball seemed certain to go in, but Barcoe added a final touch to be sure.

The striker added the coup de grace with 66 minutes on the clock. Chesting the ball down, Vinny O’Brien set off on a good run before teeing up Grincell to slip Barcoe through. With no offside given or challenge incoming, he made no mistake.

That was the job done. Even though New Ross had the final say, Paul Phelan chipping Pierce Dargan in injury-time, it was too little too late.