Kilkenny’s Mini Boys in Green are ready for a major adventure! 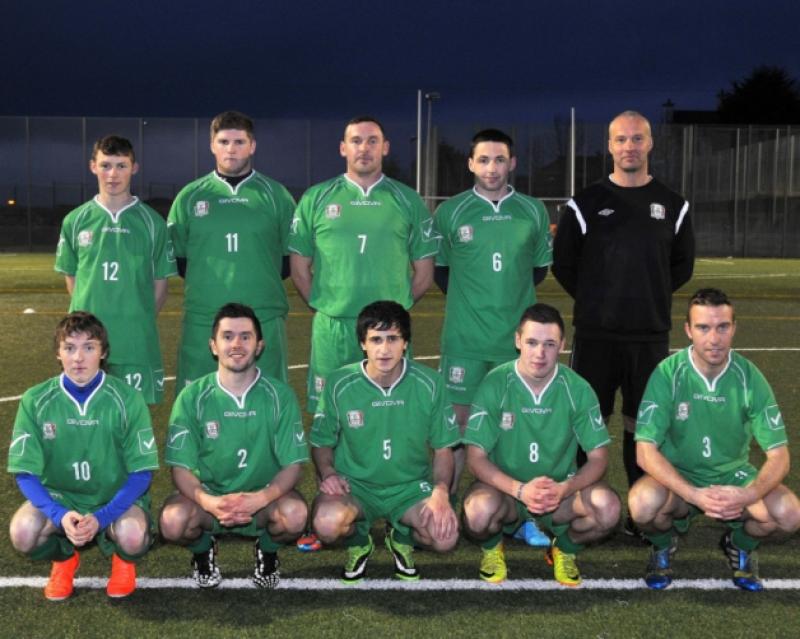 They may be the Boys in Green, but an Irish soccer team will have a black and amber backbone when it goes gunning for European glory.

They may be the Boys in Green, but an Irish soccer team will have a black and amber backbone when it goes gunning for European glory.

Six-a-side football may not be well-known in this country as it is in others, but try telling the Irish team it doesn’t matter.

The nine-strong squad - six of whom play for clubs in the Kilkenny & District League - will jet off to Montenegro next week in a bid to claim the Mini EURO 2014 crown.

The Irish side will go into the 32-nation tournament ready to give their all, with manager admitting the players can’t wait.

“They’re really looking forward to it,” national manager Lee Kill told the ’People. “There’s a lot of young lads in the squad who can’t wait to get out to Montenegro and play for their country. They all get on so well and are really up for it.

Kill is no stranger to the local game, having joined it as a referee little over a year ago. Given the job of selecting an Irish squad for the tournament from a national competition held in Limerick during the Summer, he saw more than a few familiar faces there.

“My task was to scout for a team from the tournament, and as the Kilkenny lads won it, there was always going to be quite a strong local representation,” he said.

The side, which is captained by James Kelly, also has Damien Raggett, Paddy Cahill, Jack Poyntz, Dessie Hayes (all Freebooters) and Emmet Nugent (Fort Rangers) in its ranks. It could have had more Kilkenny connections.

“I originally had 12 players in the squad,” said Kill. “Henry O’Neill (Newpark) and Davy Buggy (Fort Rangers) were part of it, but we had to trim the squad after the tournament’s venue was changed.

“It had been originally organised for Israel, but with the trouble out there it was moved to Montenegro - flights were paid for but the organisers couldn’t get refunded, so we had to cut squads.”

Joining the locals are three other players who are known in the county.

“There are six players from Kilkenny and the three from Nenagh - Oisin and Cillian Fitzpatrick and Dylan Kennedy,” he said. “They are guys whom people who follow local soccer will know as well as they played Evergreen in last year’s Youths’ Cup final in Castlecomer.

As a referee who gets to see plenty of local players in action, Kill wasn’t surprised to see a Kilkenny team win in Limerick.

“I have seen a lot of good footballers when I go around Kilkenny refereeing,” he added. “I’m sure many could play at a high level, as I’m sure plenty have already.

“There is plenty of talent there,” he agreed. “The standard is excellent. They call it junior soccer but they could give it another name as that tag doesn’t do the game justice. There are some excellent players around and luckily we have a few of them in our squad.”

With the tournament now around the corner, the scale of the event is really starting to sink in for Kill.

“Even though there are 32 countries involved it’s only in the last while that I’m beginning to discover how seriously the tournament is being taken,” he said. “It’s treated with great respect in Eastern Europe; it’s a big deal there.

“As far as the tournament goes it will run differently from regular football,” he added.

“It’s played in a very stop-start fashion and you have to be clever in the way you use your rolling substitutions. We’ve had three good training sessions of late, with the last two also taking in friendlies against a team of Portuguese players who are based in Kilkenny. They are really good footballers who have provided a solid test for our team.

“The guys have been really responsive,” he continued. “They’ve reacted well to some of the things I’ve tried to add, such as tactical things and set-pieces for the games, while they have also given great input themselves.

“They are a great bunch who get on so well - and even though the majority are from Kilkenny they’ve made the three young players from Nenagh feel so welcome. We have developed a great relationship between all the players.”

Drawn in Group A, Ireland will face Italy, Kazakhstan and Croatia, who were beaten in the 2013 final. Nothing will be easy for the Boys in Green.

“We’ve been drawn in a tough group, one which doesn’t get any easier when you consider that Kazakhstan have been tipped as the favourites to win it out,” said Kill.

“It’s quite a tough schedule we’ve been given as well,” he added. “We’ll have to play our first match at 8am the morning after we arrive in Montenegro, then we’ll have a second game late that night.

“It’s going to be a challenge - hopefully we can progress to the knockout stages - , but we can’t wait to get out there. It’ll be a great experience.”

The biggest event in European six-a-side football, the Mini EURO 2014 tournament kicks off with an opening ceremony on Wednesday, November 26, before host nation Montenegro take on Scotland in the first match.

Ireland begin their Group A campaign against Kazakhstan on Thursday, November 27. That game will be played held at 8am (7am Irish time) with the team in action again that night when they face Croatia. Their last group game is on the Friday, when they go up against Italy at 12 noon (11am Irish time).

The knockout stages of the European competition begin on the Saturday, when the six group winners and runners-up, along with four of the best third-placed teams, play in the last 16 draw. The quarter-finals will be held that evening also, with the semi-finals and final to be played on Sunday, November 30, when one team will be crowned champions of Europe.