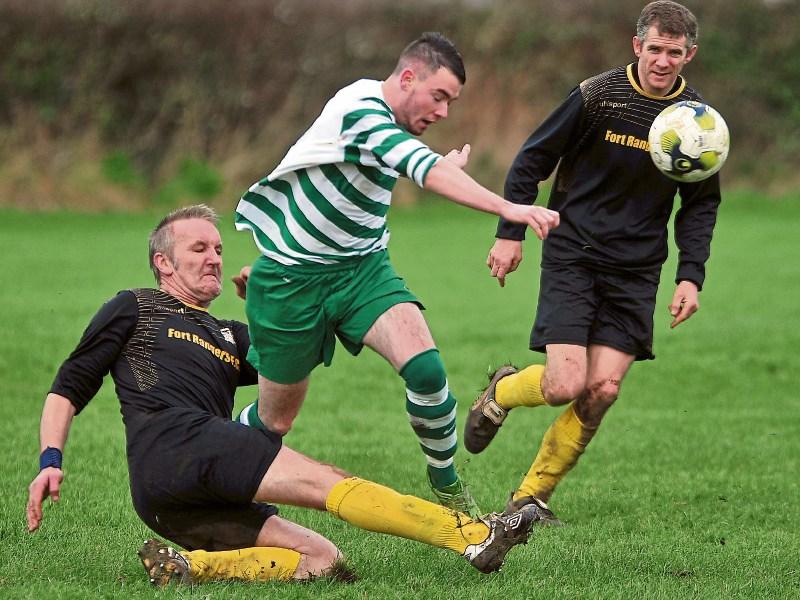 The title holders gave a confident display as they eased past Fort Rangers in their semi-final at Wallslough on Sunday morning.

When it boiled down to it, it was Evergreen’s threat from the dead ball that paid off as two free-kicks, one at either end of the first half, all but settled the game.

The opener came after just 1o minutes. Jamie Owens did the initial work, whipping in a free-kick from the left corner of the Fort box.

Rangers ’keeper Davy Buggy could only parry the ball, which zipped over the wall. It fell straight at the feet of Robbie Quan, who couldn’t miss from two yards out.

The goal came in the middle of a good spell of pressure from the visitors, who showed no signs of ill-effects to be back on grass after playing several games on their new artificial pitch.

They maintained the fast pace they had built into their game over the past two months, with Jason Quan and Ben Hickey storming down the wings as they tried to create chances.

They spurned a great opportunity to double their lead after 20 minutes. Spotting a gap in the Fort defence Quan cut in from the left wing and centred a teasing ball, but Owens couldn’t keep his shot on target.

Owens was involved again after the half hour, causing bother with another free-kick. With the ball fizzing towards Darragh Walshe, Jim Nugent’s attempted block only served to turn the ball goalwards, but he was relieved to see it flash wide of the post.

Fort livened up after that - Michael Saunders had their best chance, unleashing a long range 33rd minute drive that swerved just beyond the far post, but they were sunk when Evergreen struck again before half-time.

The second goal was practically a carbon copy of their opener. Again, Owens whipped in a free from the left side of the box. Once more Buggy could only parry the shot - this time Dylan Whearty was on hand to stab home the loose ball.

Facing a two goal deficit Fort were up against it in the second half, but that didn’t stop them from giving it a go.

The hosts changed things around for the new half, pushing Eddie Nugent into attack alongside Tony Moran.

The additional strength helped - they almost pulled a goal back when Stephen McKenna rose highest to meet Michael Saunders’ 51st minute corner, but his header narrowly cleared the crossbar.

Evergreen weren’t about to sit back and let Rangers boss the game. Darragh Walshe proved as much, bringing a good save from Davy Buggy with a stinging 54th minute strike before Ben Hickey brought another solid stop from the netminder a few minutes later.

There was little he could do to prevent Evergreen scoring again on the hour, Chris Whearty all but sealing their final berth when he steered a low shot through a packed box and found the inside of the far post.

Fort did pull a goal back, Tony Moran pouncing to finish after Eddie Nugent’s 67th minute free came back off Packie Holden, but Evergreen weren’t in danger of being reeled in before the final whistle.

Evergreen will play old rivals Freebooters in the final after two Owen McCormack goals helped the Blues beat Spa United in their semi-final showdown in Johnstown.