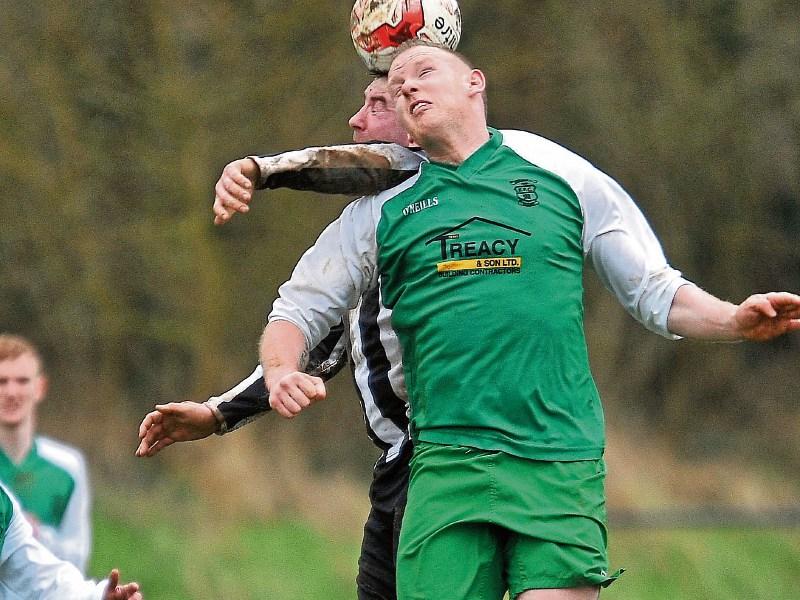 Good fortune played its part in a city derby, as luck for one team and none for another played a big part in how Evergreen B came away with three valuable Premier Division points.

That’s not to say the Kells Road side didn’t deserve their win - Cian Morton’s two goals; especially his second - meant they got a due reward, but Newpark A must be wondering how their cross-city rivals left Buckley Park with all the spoils.

It was one of those days where Mark Ryan’s side created enough chances to win several games, let alone one. Instead, wayward shooting and sheer bad luck saw them frustrated more times across Sunday morning.

The big blow came when Morton doubled his and Evergreen’s tally just after the hour. There was some good fortune in the build-up, as a Dean Woods clearance cannoned off ’Green striker David Roche before the ball fell just right for Morton.

The rest was anything but a fluke. Standing inside the D, Morton took one look at the goal and decided to go for it.

The quick, low shot caught netminder Michael Lambert out - he had been expecting Morton to move into the box. With barely enough time to set himself the ’keeper was powerless to prevent the ball from zipping inside his right hand post.

The goal summed up a frustrating morning for Newpark who could, and probably should, have been well in control of the game by then.

The hosts were quick out of the blocks, and should have had a goal to celebrate inside eight minutes.

Sent on his way by Jason Delaney Henry O’Neill dashed down the right wing and fired in a teasing cross. Ger Wall stole in on the blind side of the Evergreen defence and had a free header, but he powered his effort over the bar when he seemed certain to score.

The sides settled into a midfield stalemate after that, but it was Newpark who again went close to breaking that deadlock with 17 minutes on the clock.

Strong link-up play between Joey Walsh and Delaney gave Shane O’Neill room to shoot, but his effort was blocked by Ivor O’Brien. O’Neill had a second bite at the cherry when the rebound came his way, but his chipped shot cleared the bar.

The hosts continued to press for a way through, and went close again when John Hayes split the Evergreen defence with a telling pass. Jason Delaney was on it in a flash, but Philly Johnson dashed from his line to make a vital block.

At that stage it looked more like when rather than if Newpark would score, but Evergreen weren’t about to let them have it all their own way. The visitors had a couple of chances in quick succession, both falling to David Roche.

The first came after a great through ball from Murt Dunphy but, played onside, Roche saw his 24th minute shot flash past the wrong side of the post. He went close again little over 60 seconds later, climbing highest to reach Sammy Johnson’s cross, but he couldn’t keep his header on target.

Newpark didn’t heed the warnings from those chances, and fell behind just a few minutes later. They escaped when Dean Woods diverted Ivor O’Brien’s curling shot over the bar, but were caught when Johnson’s corner was flicked across goal by Niall Brennan for Morton to glance home from six yards out.

Newpark were stung by that, but almost drew level on the stroke of half-time. Carved open by a great Dean Woods pass Evergreen seemed to be in trouble when Ger Wall squared the ball to the unmarked Shane O’Neill but he scuffed his shot, giving Philly Johnson time to react and make the save.

It wasn’t all one-way in terms of missed chances: Evergreen also spurned a goal chance before the break. Sent on his way by Sammy Johnson, Cian Morton only had Lambert to beat but his stoppage time shot lacked power to trouble the netminder.

Newpark pressed hard again from the start of the second half but with the pitch cutting up they couldn’t find a way to break down Evergreen’s defensive resolve. With the heavy surface sapping their energies they seemed to be in real trouble when Morton grabbed his second goal on 62 minutes, but the hosts refused to quit.

Henry O’Neill went close to pulling a goal back within minutes, beating Philly Johnson with a low drive but not the post – the ball clipped the base of the netminder’s left upright and bounced away.

They did pull a goal back on 73 minutes, Joey Walsh ramming the ball home after some patient play in the corner by Ger Wall and Shane O’Neill. That gave them the energy to drive on for the equaliser – they poured forward in that last minutes, going close when Wall unleashed a snapshot inside the box, but Philly Johnson’s point-blank reaction save helped secure three much-needed points for the visitors in their battle to avoid relegation.