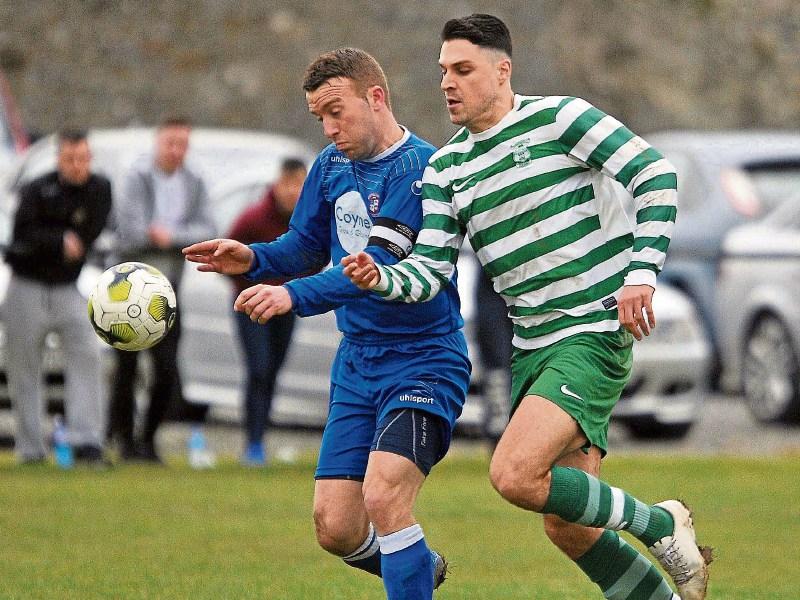 A two-goal blast from Simon Burke was just the kick-start Evergreen needed to successfully defend their Maher Shield title.

Burke’s first half brace went a long way towards giving the Kells Road club the spoils, but it didn’t tell the full tale as they ran out comfortable winners at Derdimus on Sunday.

Packie Holden’s side showed little fear and no mercy to cross-town rivals Freebooters, handing the Blues a big beating as the first piece of junior silverware was handed out for the season.

The champions, who could yet end their campaign with a domestic treble – the Premier Division title could be added to the haul should they win they maintain their unbeaten run and win their next two league games – were nothing short of ruthless as they hit their old foes with a devastating bunch of fives.

Freebooters, undergoing a transformation under new manager Jimmy Donnelly, were by far the younger side, but the youthful Blues learned a big lesson from the game: when you’re presented with chances, take them.

Evergreen rubber-stamped that belief, and how, taking just eight minutes to get a grip on the game. Watching as a Dylan Whearty free-kick came his way, Simon Burke took advantage of some slack defending to rise on the edge of the six yard box and plant a deft header inside Sean Kiely’s right post.

Even though the game was only still in its infancy, it had been coming. Evergreen, with the craft and guile of Brian Jordan in midfield, were quick to work the ball forward to a dangerous two-pronged attack of Man of the Match Burke and Darragh Walshe.

They had a chance to make it 2-0 on the quarter hour, when a Jamie Owens free was allowed to drop to the unmarked Niall Andrews, who had crept in at the back post, but Freebooters heaved a sigh of relief when the offside flag was raised.

’Booters had been on the back-foot when it came to going forward, but did get going in the right direction soon after. James Kelly caused a little flutter of worry when he whipped in a dangerous free-kick from the right flank. Cian Loy was quickest to react, beating Holden to the delivery, but he couldn’t keep his 20th minute header on target.

The game swung back the other way, with Evergreen carving out another good chance soon after. Jason Quan was heavily involved, using his strength to win possession and hold off a challenge before releasing Burke on the left, but his powerful shot cannoned off the post.

The danger wasn’t over, as the rebound came straight out to the in-rushing Walshe, but he couldn’t stop his follow-up shot from squirming wide of the far post.

Holding a firm line across midfield, Evergreen continued to enjoy plenty of possession while also keeping Freebooters at bay. Although they looked comfortable when one up, they reinforced that position when Burke double his and his side’s tally eight minutes before the break.

While the first goal had a route one feel to it, this strike was all about Evergreen’s composure and control in tight spaces. Jordan and Owens did the damage, combining for a one-two in the right corner that unlocked the Freebooters defence. Jordan continued the move, dashing along the endline before threading a low ball across the goalmouth for Burke to add the finish at the back post.

Even though there were still 45 minutes left in the game, it looked like Freebooters were left facing a mountain to climb.

The Blues realised as much and duly acted on it, making changes to their side for the second half. Sulayman Masood and Chris Dawson were brought on, a double change which seemed to steady the ship initially. Dawson was involved in their best move of the match up to that point, flicking on Cian Loy’s cross for the on-rushing James Kelly but Packie Holden raced from his line to narrow the angle, forcing Kelly to turn his 49th minute shot past the wrong side of the post.

The Blues were in a better mood at that stage and went closer still to pulling a goal back with 54 minutes on the clock. Vincent Wallace was the catalyst, showing great footwork as he sped down the left before working the ball to Loy. A clever pass saw Loy roll possession right into Sam Watkins’ path, but his arrowed strike was well held by Holden.

Up to that point Evergreen had been in neutral for most of the second half, but when they stepped on the gas again they raced into an unassailable lead to all but make the spoils safe with half an hour to play.

The third goal, when it came, was almost out of nothing. Freebooters failed to deal with a Damian Kelly free-kick on the right and paid the price when Darragh Walshe pounced on the loose ball, acrobatically hooking it over his head and inside the far post.

That strike flattened Freebooters, but if they thought Evergreen would ease up they were sorely mistaken. Smelling blood, the leaders pressed for more goals (Simon Burke and sub Sean Barcoe had chances, but couldn’t convert them) before adding a fourth with little over 20 minutes left.

Awarded a spot kick after Jason Quan was sent tumbling in the box, Barcoe stepped up and hammered a low drive to the left. The ball smashed off the post, but such was Evergreen’s luck (and Freebooters’ bad fortune) Barcoe’s shot came back out and hit the diving Sean Kiely before ending up in the net.

Kiely did well to keep Evergreen’s next effort out, diving smartly to his right to push a searing Jamie Owens free-kick to safety after 70 minutes, but there was little he could do to prevent Barcoe from adding a fifth goal four minutes from time. In the right place at the right time, Barcoe beat James Kelly to a Quan cross and gave Kiely no chance with a powerful header from point-blank range.