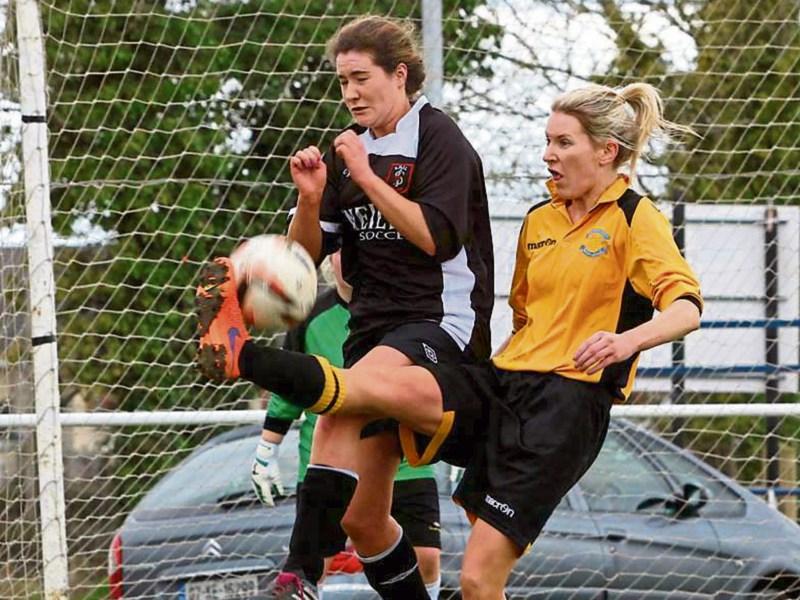 Never write off the champs! That was the message from the Kilkenny & District League women’s team as they stayed on course for Leinster glory.

The only team to lift the Angela Hearst Memorial Trophy, the Cats roared their way into the final for the third year in a row when they battered Kildare with a six-goal showing on Saturday.

Going into the game on the back of a loss and a draw, the Cats knew they could not settle for anything less than a convincing win - goal difference, plus other results going their way, were vital if they were to make the final.

As the other game between Combined Counties and Carlow League had a late kick-off it was up to Kilkenny to get their side of the job done first.

Things didn’t start the best for Kilkenny as, with just one minute on the clock, Kildare went on the attack and struck the upright from a tight angle.

This proved to be a massive wake-up call as, from here on, the game proved to be completely one-sided in Kilkenny’s favour.

The game was only 13 minutes old when the visitors made their dominance count. Following a clearance from a corner the ball made its way to Sonia Buggy.

Although 25 yards out she had a clear view of the goal and used it to her advantage, lobbing the Kildare ’keeper to open the scoring.

Stung by that goal Kildare went on the attack, but the Kilkenny defence of Aine Lannon, Caoimhe Shiel, Niamh Bolger and Aisling O’Grady proved unbreakable and held solid for the game as they let nothing through.

The constant pressure was telling, however, as with less than seven minutes remaining in the half Kilkenny doubled their lead. Aine Lannon floated in a corner which was taken down by Assumpta O’Farrell. She laid the ball off for Demi Donovan who made no mistake with a powerful shot.

Kilkenny kept driving on and increased their lead two minutes from half-time. Kildare failed to clear a high ball and were punished when the ever-present Donovan pounced to grab her second of the game, making it 3-0 at the break.

The second half was only three minutes old when Donovan completed her hat-trick. Winning the ball on the half-way line she sailed around three Kildare defenders before slotting it past the outrushing ’keeper.

Now 4-0 up Kilkenny could have eased up a little bit, but they were determined to get more goals. Donovan almost bagged her fourth when she found herself in one-on-one with the ’keeper in the 60th minute, but the ball struck the post before Kildare cleared it to safety.

Kildare made a few substitutions, including a change of goalkeeper, the new netminder’s first job of the afternoon was to pick the ball out of the back of the net when Donovan grabbed her fourth of the game.

Five became six on the stroke of full-time when another Aine Lannon corner flew into the box. The Kildare netminder called for the ball but couldn’t collect it before Aisling O’Grady got there to make it 6-0.

Kilkenny had completed their part of the job but faced a nervous wait to see if they were in the final. As they were walking off the pitch news filtered through that the Combined Counties were beating Carlow 2-0 at half-time - if the score remained that way until the end, Kilkenny were out. To the Cats’ delight Carlow stormed back to win 3-2, a result which means they will take on Kilkenny for the Angela Hearst Cup.

Kilkenny’s Ria Lawson and Becky Walsh were a massive thorn in Kildare’s side, but four-goal heroine Demi Donovan was a deserved Player of the Match.