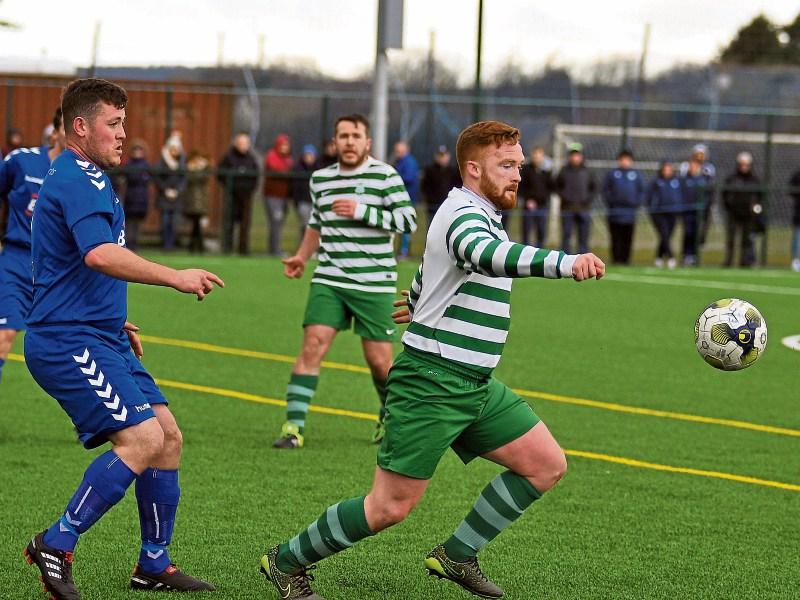 Nerves of steel and a silky finish were just two components called upon as Daragh Walshe blasted Evergreen into the last eight of the Leinster Junior Cup.

The striker was the man of the moment for the Kells Road club, netting an extra-time winner from the spot as Packie Holden’s men ko’d champions Collinstown in a tense tussle.

With the game just two minutes away from a penalty shootout, Evergreen were given a chance to blast their way into the quarter-finals of the provincial competition when a Sean Barcoe header cannoned off the arm of Ian McNeill inside the box. Penalty!

The drama surrounding the spot-kick didn’t affect Walshe. He stayed cool despite the Collinstown protestations – not to mention the nerves coming from the home fans – and waited for his moment before drilling a composed kick beyond Derek O’Connor’s right hand and inside the post.

The goal lit up the Kells Road, a strong home support erupting as their side edged closer to a spot in the last eight. Their long day started out in a similar vein, as the hosts used a strong wind at their backs to gust into an early lead.

Speed and decisiveness on the ball saw Evergreen go for the jugular as early as the 11th minute.

Chasing a ball that zipped down the left, Simon Burke shrugged off his marker and cut into the box. With his mind made up he went for goal, but O’Connor dashed from his line to smother the danger.

The city side stayed on the front foot – even after a lengthy stoppage for the injured Collinstown defender Luke Fitzpatrick – and tore into the lead with another swift move on 22 minutes. Ben Hickey was the provider, sprinting down the right flank before whipping in a tempting cross.

Sprinting towards the back post, Burke was first to the delivery. He could have smashed it first time, but waited for netminder O’Connor to show his hand before finishing with a neat shot high to the right.

Evergreen were good value for the lead, but almost gifted Collinstown an equaliser within minutes. Having watched Ian McNeill scuff a 26th minute drive wide Packie Holden gave the visitors another pop at goal when his quickly-taken throw-out went straight to Karl Laffan but he slipped as he struck the ball – a real let-off.

The alarm bells which rang at that miss were on call again just 60 seconds later – but this time there was no escape. Evergreen switched off as Dean Carpenter floated a free-kick into the box, failing to pick up sub Shane Murphy.

Given the freedom of the box, Murphy took the ball down on his chest and then sweetly tucked a low diagonal shot beyond Holden’s reach and inside the far right post.

The goal settled Collinstown, who did their best to take the wind out of the game. Frustrating their hosts they slowed the game down while also limiting Evergreen to half-chances which never bore fruit.

With the wind behind them for the second half it was no surprise to see Collinstown step things up again, but in their rush to pour forward they almost leaked another goal. Daragh Walshe had a couple of bites, the best coming when Jamie Owens won a swirling aerial ball and played his team-mate on, but Walshe’s first-time 63rd minute strike flashed just wide.

Collinstown heeded the escape, hitting back with a goal good enough to win any game. Given room on the left thanks to a long O’Connor free, Daniel Matthews, Dylan Clarke and Dean Ebbe carved Evergreen open with a series of quick passes, working their way in from the wing before Clarke hammered a low drive inside the left post from the edge of the box.

The goal could have knocked the stuffing out of Evergreen, but they replied with nothing short of a 70th minute cracker.

Taking down Ben Hickey’s throw-in near the left corner of the box Daragh Walshe controlled the ball, turned his man and unleashed a stunning shot that looped over O’Connor and screamed into the top left corner.

At that stage it seemed the sides were content to duke it out in extra-time, but both had chances to avoid going that route. Collinstown went close first, Shane Murphy saw Oisin Corr head his 75th minute lob off the line, while fellow sub Dylan McKeever clattered an 83rd minute effort off the bar.

Evergreen left it later still, going to within seconds of extra-time before almost snatching the winner. Ben Hickey had the chance to settle the game when he raced on to Tommy Earls’ threaded stoppage time pass and sped into the box but he rushed his shot, giving O’Connor an easy save.

The Evergreen support thought their best chance of beating the champions had gone – but Walshe would settle things in extra-time.

The Kilkenny & District League’s hopes of Leinster Junior Cup glory were doubled after Thomastown United also booked their place in the last eight.

United were the first local side to advance, making good on their trip to Dublin as they beat Firhouse Clover 1-0 on Saturday.

The visitors wasted little time in taking control of the game, Mick O’Neill taking Nathan Sherry’s knockdown and firing home the only goal of the game.

“It’s always good to go to Dublin and get a win,” said United’s Richard Watson. “We started well with the goal but they never threatened us – our defence played a compact game and pushed up, forcing Firhouse to play the ball short which didn’t allow them to use the strong wind.”