Double delight for Girls in 'Green 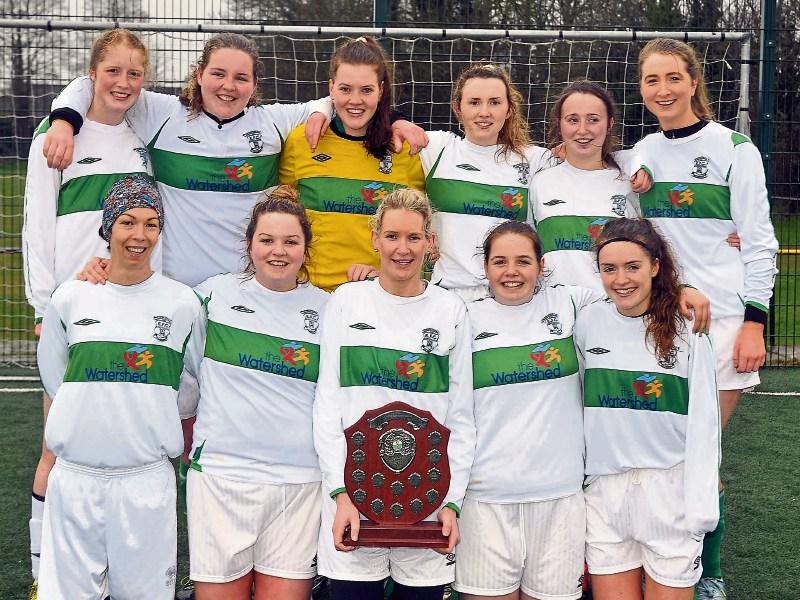 The game may be smaller in stature, but there was no reduction in the quality on show as Evergreen marched their way to the Women’s Shield title.

The city side cut an impressive dash as they dismantled the hopes of rivals Thomastown United in an entertaining seven-a-side 60-minute affair on the Derdimus all-weather pitch – a wise option, given the weather!

The move to the small-sided game was taken by the Kilkenny & District League after demand faded from their full-sized women’s competition. With some teams disbanding, others moving to different competitions, the League were left with a choice – scrap all women’s soccer or try something different.

In the end they went with the latter option, a wise choice which was reflected in Saturday’s final where a Kirsty Maher-inspired city side added the Shield to a League title won just a short while ago.

“When we didn’t have the numbers for an 11-a-side league we knew we had to try something different to keep the women’s game going in Kilkenny,” said League chairman John Corrigan after the final whistle. “Going down the seven-a-side route was experimental, but anyone who watched this Shield final will tell you that it worked.”

Although played on a smaller pitch both teams delivered big performances. Evergreen were first to deliver a shot across Thomastown’s bow, Kirsty Maher stepping on to a loose ball in midfield and unleashing a stinging drive, but ’Town ’keeper Becca McCarthy comfortably watched the fifth minute shot flash wide.

The city side were impressive in attack in the opening quarter, with Sinead Corrigan the focal point of their moves, but with Niamh Whelan and Shauna Carroll leading the Thomastown riposte it was no surprise to see United contain their rivals.

The speed of the small-sided game was highlighted when Evergreen took the lead after 16 minutes. At first they were on the back foot, as Linda Minogue fed Carroll to fizz a dangerous ball into the box but Evergreen netminder Aoife Prendergast got down smartly to smother the danger.

All of a shot, they turned defence into attack. A swift clearance was moved up to Aoife Nolan, who played a neat one-two with Corrigan before curling a sweet shot inside the right post.

The goal saw Evergreen push on in attack, looking for a second to strengthen their lead. Nolan and Niamh McMullen had half-chances, before Corrigan could and should have bagged a second for her side with 20 minutes on the clock.

Left alone on the edge of the box, Corrigan ghosted into space before coolly controlling McMullen’s centred pass, but McCarthy got down to make the save.

That save spurred Paul Dempsey’s Thomastown on. Linda Minogue got them going, slipping a clever ball on for Shauna Carroll to chase down the right but her half-volley flashed over the bar.

Back came Evergreen. Corrigan spurned a chance to get on the scoresheet when she gathered Maher’s perfectly-spun pass on the left wing and cut inside but she lashed her 22nd minute shot past the wrong side of the far post. She had another go two minutes later, letting fly with a low drive, but McCarthy made a great save to deny her opponent.

Thomastown were under the cosh for a spell, but were within a whisker of going in all square at half-time. The busy Caroline Atkins seemed certain to have levelled matters for her side when she appeared at the back post to meet Carroll’s teasing corner, but somehow Aoife Prendergast got a strong right hand behind the ball to claw it out of the top corner of the net.

With just a goal between the teams it seemed as if there was still everything to play for in the second half, but two strikes in six minutes saw Evergreen take a grip on the title they would not relinquish.

It took them seven second half minutes to double their advantage. There was a touch of good fortune about the goal, as Sinead Corrigan’s speculative ball into the box from the right wing took a wicked bounce and beat netminder McCarthy.

Driving forward, the city side all but made the game safe after 43 minutes. There was nothing fluky about this one as Evergreen worked the ball out from the back. Aoife Prendergast quickly rolled the ball out to Danielle Kenny, who pinged it forward.

A quick series of passes between Kirsty Maher and Sinead Corrigan cut Thomastown open, the duo combining with a swift one-two before Maher hammered a low shot into the far corner.

That goal took some of the wind out of Thomastown’s sails – Shauna Carroll did cause a little panic with a 46th minute shot which Prendergast found hard to hold on to – but it wasn’t until the last minute that Evergreen hammered home the final nail. Again Maher was at the heart of the move, picking up an Aine Fennelly throw-in and taking a quick step before lashing home an unstoppable drive that wrapped up the spoils for Barry O’Neill’s side.