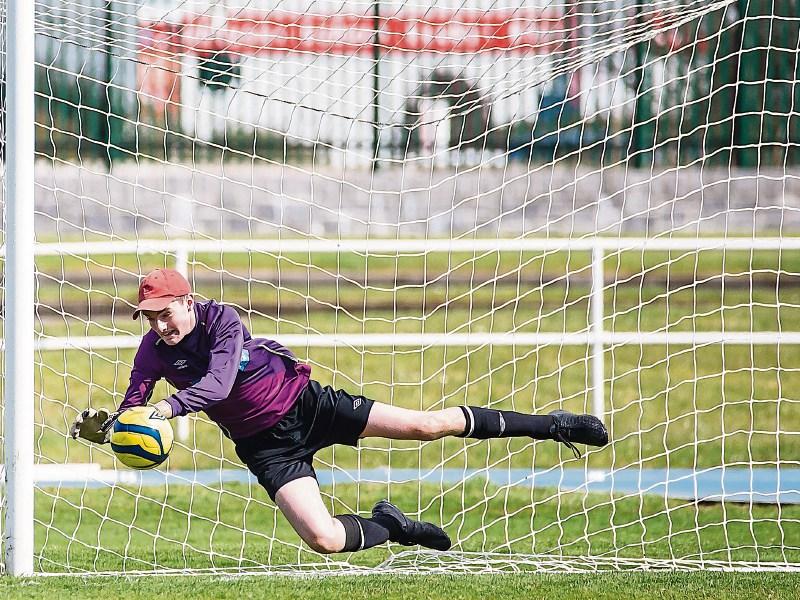 Such is the collection of silverware housed there, the trophy cabinet at St Kieran’s College may need an extension some time soon!

This time it was the turn of the minor soccer team to lift All-Ireland honours as they overcame a tough challenge from Douglas Community School at Waterford’s RSC.

The Kilkenny school’s sporting prowess is well known, so it was no surprise to see them add another pot to the pile – only this time they had to survive a test of their nerve.

In a match that had plenty of chances but few goals, the title’s destination went down to penalties. A little luck, plus an ice-cool finish from Jim Ryan, served to send the boys from the College Road home with the gold medals.

Ryan had a big role to play in the game, firing the Saints in front inside four second half minutes, but just as the trophy was within their grasp Kieran’s were rocked by a spectacular equaliser from Douglas skipper Adam O’Reilly.

The goals were just two of the highlights of a game where both sides delivered a superb performance.

Kieran’s could, and possibly should, have stormed ahead inside four minutes, when Jamie Harkin whipped a teasing ball in from the right wing. It fell just right for the incoming Tim Corkery, but he crashed his half-volley into the side netting.

Kieran’s were dominant in the first half, using their pace to keep Douglas pinned back. With George Murphy controlling midfield the attacking combination of Harkin, skipper Ciaran Brennan and Jim Ryan were quick to close down the Douglas defence and force them into rushed clearances.

Good as their attack was, Kieran’s couldn’t find a way to goal. Cillian O’Donovan was the busier of the two ’keepers, the Douglas netminder making a smart save to stop Jamie Young’s 19th minute header.

He was called into action again when Brennan, who was a constant menace, had a go on 27 minutes. Waltzing through several challenges, Brennan made space to strike but his shot was comfortably dealt with by O’Donovan.

Douglas had been under the cosh at spells in that first half, but once they had the wind at their back they were determined to start the second half with a bang.

They nearly grabbed an early lead too, Andrew Greaney seizing on a loose ball down the left before unleashing a fierce shot.

Stephen Barron did well to push the ball away - defender Padraic Moylan did even better, racing in to nick the ball away before Ben Lucey could tuck away the rebound.

Kieran’s took full advantage of that let-off and hit back with the opener. Ciaran Brennan was the provider, picking possession off Patrick McSweeney’s toe and driving into the right corner before fizzing a low cross for Jim Ryan to confidently sidefoot home.

Kieran’s were good value for their lead, but had Barron to thank for holding on to it. The goalkeeper made was a safe pair of hands, rescuing his side when he superbly pushed Adam Idah’s dangerous 50th minute header out for a corner.

Sweeping the ball about the pitch with confidence and purpose, Kieran’s continued to keep the Cork school’s big two of Idah and Adam O’Reilly quiet. George Murphy had a big say in that, marshalling midfield with real intent.

It wasn’t all muscle – his footwork was just as impressive. One such move saw his pick up play in the centre and, with some clever flicks, bore a hole in the Cork ranks before he whipped a ball across the box. Brennan was quickest to react, but O’Donovan was there to block his 61st minute shot.

With time ticking away Douglas grew desperate – even O’Donovan raced forward when his side won a late corner – but just when it seemed like Kieran’s were home and dry they were gunned down by a bullet-like strike.

There seemed to be little danger when, in stoppage time, O’Reilly stepped onto a loose ball 15 metres outside the box – but the Douglas skipper unleashed a first-time strike that screamed into the top right corner of the Kieran’s net.

Hauled back from the brink of victory, Kieran’s tried to get back on top in the first half of extra-time. They went agonisingly close to scoring again when an outrageous Murphy flick played Brennan through on goal. He dinked the ball past the outrushing O’Donovan, but watched as his shot rolled past the wrong side of the far right post.

Douglas had a chance to go ahead themselves in the dying seconds of the half. Great work by Idah and Andrew Greaney teed up sub Chris O’Reilly for a pop at the target, but again Barron was there to save his side with a strong stop.

The drama didn’t end when the sides reached the penalty shootout. The first six kicks all found the net, Conor Kelly and Jamie Harkin tucking their kicks away for Kieran’s – they got a real slice of luck when Brennan’s kick squirmed under O’Donovan’s body and rolled across the line - before the Kilkenny school took control after Andrew Cotter blasted his kick over the bar.

They seized on that opportunity, Jamie Young rifling a low drive to the net to make it 4-3. Douglas did draw level with their last kick from Ben Lucey, forcing all the focus on the fifth Kieran’s taker Jim Ryan.

All eyes in the RSC may have been on Ryan, but he didn’t wilt, coolly tucking the ball low in the bottom right corner to spark the celebrations in the Kieran’s ranks.