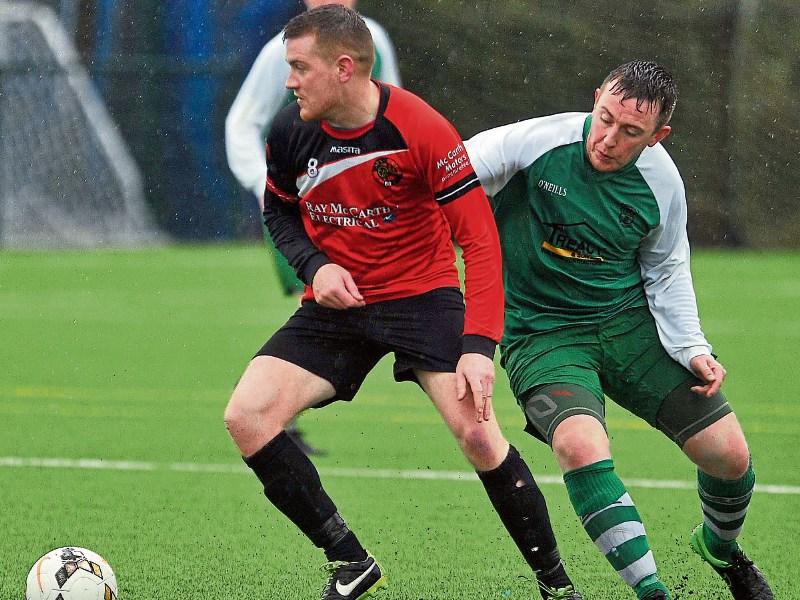 Evergreen B’s McCalmont Cup aspirations showed no signs of slowing down but they had to get the better of two opponents to make the quarter-finals - Spa United and the weather!

Two first half goals saw Gary Maher’s side make it safely through to the last eight, but it wasn’t easy. A howling wind and driving icy rain meant it was a miserable Sunday on the Kells Road - then they had to contend with the confidence of a Spa side who already have one trophy in the cabinet.

The Division One champs had a real swagger about them throughout the game. There was enough confidence in their performance to bring the ball out from the back and use intelligent play in the centre to work the ball into attack.

The real trouble for Spa was that the elements hampered their best efforts. United played against the wind in the first half and it hurt them - in fighting the gale they had to play a harder, faster ball, which often skipped ahead of the attack.

The weather created havoc for both teams, but played its part in the opening goal after 20 minutes. Awarded a free out on the left, just inside the half-way line, John Brett used the elements to put some extra spin on the ball.

The tactic worked a treat. Brett’s effort zoomed into the box, towards Matthew Holohan. He tried to get a flick on the ball but couldn’t make contact – he didn’t need to, as the ball carried through and ended up inside Mark Hughes’ left post.

Evergreen were looking for a follow-up goal to kill the game off, but even they must have been surprised at how quickly it arrived. They almost grabbed a second when David Roche sent a glancing header just wide on 23 minutes, but goal number two wasn’t far behind.

The strike, when it came, owed a lot to Evergreen’s attacking instincts. Driving at Spa, Cian Morton teed up Roche for a pop at goal but Jason Moore rushed out to make the block. The rebound fell to Holohan, but Hughes denied the striker with a great save.

The danger wasn’t over though as, from the resulting corner, Evergreen went two up. There was a little luck about the goal, as Brett drilled a low ball into the box. It took a few bobbles off some legs before Ger Galvin snapped up the gift with a simple tap-in at the back post.

At that stage it looked like job done for Evergreen, but Spa United weren’t about to throw in the towel. Chasing every ball, they almost found a quick way back into the game on 27 minutes, when possession slipped from Johnston’s grasp like a wet bar of soap.

Enda Purcell was on to the ball in a flash, taking it past the grounded ’keeper and turning a low shot goalwards, but Gary Owens sprinted back to hack the ball off the line.

Johnston was in the thick of things again just a few minutes later. This time he had no trouble holding the ball, pulling off a super save to stop a stinging Purcell snapshot.

His opposite number, Hughes, was also having a busy morning. He had to look lively to deny Morton a 40th minute goal after the winger chased down Galvin’s booming clearance. Morton must have thought he had scored when he lofted the ball over the advancing Hughes, but a bounce gave the netminder time to turn and hack the ball to safety.

The weather took a turn for the worse as half-time loomed, but it didn’t stop Spa from looking for a way back into the game.

Again, they nearly found it when a great one-two between Purcell and Kieran Grehan saw the latter break through and slip a low shot beyond Johnston, but Ger Galvin slid in to hook the ball off the line – the second time Spa had been frustrated by such a clearance.

Spa refused to give up the ghost in the second half, but as chances fell by the wayside they must have known it wasn’t to be their day. Eoghan Vaughan crashed an angled shot from the endline off Philly Johnston’s left post on 53 minutes, while Enda Purcell went close with a 62nd minute chip, but the ball had just too much pace to dip below the crossbar.

The Johnstown men didn’t give up, but they couldn’t break Evergreen down. Now playing against the wind the hosts dropped their midfield back, a tactic that made them tough to break down. Their strength there meant they held firm until the final whistle.

Deen Celtic’s A team booked their place in the last eight of the Cup, but only after a high-scoring shootout with River Rangers.

The ’Comer men got the better of their Kilmanagh rivals in a 10-goal thriller at the Prince.

It wasn’t easy though – after Celtic went in front through Richie Lynch goals from Gearoid Murphy and John Coady gave Rangers a 2-1 lead. The hosts stormed back, going ahead through Lynch and Peter McPhillips, but they were caught when Paddy Kennedy levelled matters just after half-time.

Once more Celtic surged on, taking a 5-3 lead thanks to Mikey McDonald and a second for McPhillips but the game wasn’t over. Robbie Lynch saved a penalty for Celtic before J.J. Corrigan netted from the spot (his goal ended a hoodoo of ten missed penalties in a row for Rangers). That made it 5-4, but Celtic finished with a flourish as Eoin Brennan netted the tenth goal of an incredible game.

Evergreen A were the first team into the last eight, beating Newpark B 4-1 on Friday evening.

They had to come from behind, as Ray Meagher gave the Division Two champions the lead at the Fen, but Robbie Quan pulled his side level before Brian Jordan shot Evergreen in front just after half-time. Niall Andrews and an own goal completed the result for the defending champions.

Thomastown United A also booked a spot in the quarter-finals but did it much easier than the rest, getting a walkover from Freebooters B.

The weather did its best to stop all soccer on Sunday, with just two league matches beating the elements.

Both games were deeply involved in promotion and relegation matters. In the Premier Division Newpark A gave their survival hopes a big shot in the arm when they saw off Freebooters A 2-1 in Buckley Park.

Jason Delaney grabbed the opener for the hosts before Tom Doyle doubled their lead. Freebooters did pull a goal back but couldn’t reel in their rivals.

That result means Mark Ryan’s side are now just a point behind Stoneyford United in the table - their game away to Freshford Town fell victim to the weather, but United do have games in hand.

It wasn’t all bad for the Blues, however. Many of the team captured the Youths’ League title less than 24 hours earlier thanks to a 2-0 win over Evergreen A.

In Division One Bridge United A did their promotion hopes no harm when they beat Tullaroan 3-1 in Goresbridge.

Chris Kavanagh, Kevin Carney and Michael Moloney all hit the net as United moved to within a point of second-placed Clover United A. Both sides have three games left to play.

The loss has all but ended Tullaroan’s hopes of promotion - they trail Bridge by four points and have played one game more.