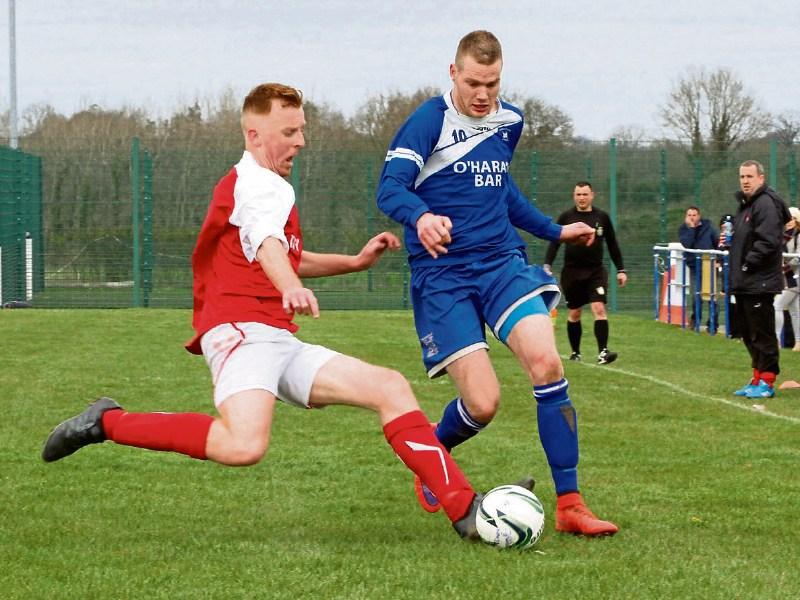 A strong performance and goals at the right time proved an unbeatable combination as Thomastown United stormed into the quarter-finals of the Leinster Junior Cup.

As the sides never played each other before both eased their way into the game at a pristine United Park. The first 20 minutes proved even, with few chances created.

Sportslink nearly broke the deadlock on 24 minutes when a looping ball beat the Thomastown defenders. Conor Farrell found himself unmarked on the back post, but he wasn’t able to direct his header towards goal.

This was a wake-up call for United. They took themselves out of third gear and went in search of the opening goal.

With just two minutes left in the half, they found it. Steven Connolly was the man of the moment, beating the ’keeper with a low drive into the bottom left corner.

The second half started just as the first had ended, with Thomastown going all out for another goal. Their persistence paid off on the hour, when Nathan Sherry rose highest to meet Mick O’Neill’s corner and power an unstoppable header into the back of the net.

Sportslink were out of the game just yet, serving up a warning eight minutes later. Eoin Bennis played a long ball down the right side to Richard Bergin who unleashed a sweet looping shot.

The ball seemed destined for the top corner, but United netminder Paul Dunne pulled off a fantastic save and tipped it over the bar.

This was the sole lapse in concentration from the ’Town back four who were solid for the game. The midfield duo of Dessie Walsh and Eamon Lyster controlled the game from start to finish, Andy Kavanagh and Mick O’Neill on the wings tracked up and back and showed no sign of weakness while the top two of Sherry and Connolly proved to be a massive thorn in Sportslink’s side.

The goal of the game was still to come, with Thomastown saving their best for last. With 88 minutes on the clock C.J. Browne took down a massive kick-out and played it straight back to Connolly.

Turning with pace, Connolly ran straight back at the visitors’ defence. From 22 yards out he struck the sweetest shot which any player would have been proud of. The ball flew straight as an arrow into the top corner of the goal.

The goal was the perfect way to rubberstamp Thomastown’s semi-final berth.