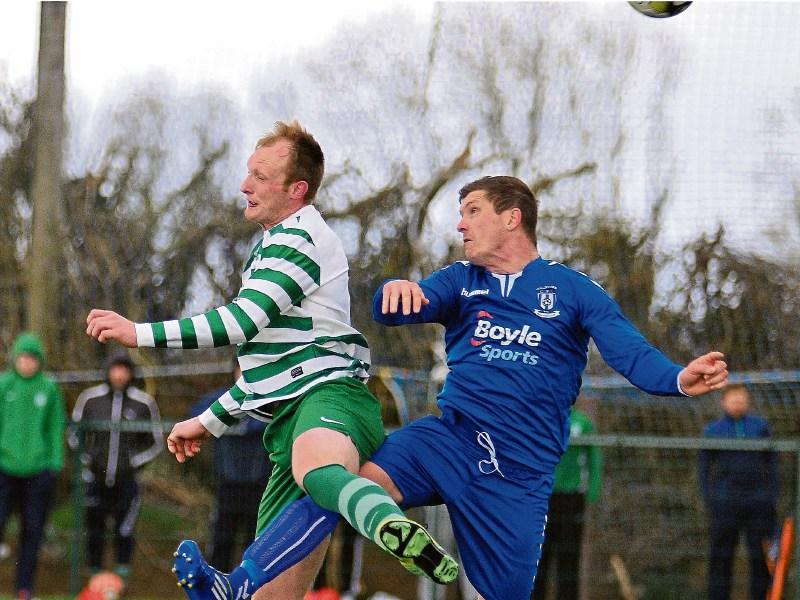 A five-star performance saw Evergreen storm their way into the final four of the Leinster Junior Cup.

The Kilkenny side were nothing short of dominant, controlling the game in all sectors as they smashed their way past Gorey Rangers in Wexford on Sunday.

Fresh from dethroning champions Collinstown in the last round, the city side kept that good form going as they moved into the provincial semi-finals with ease.

Gorey were keen to make home advantage count – they tested netminder Packie Holden with two quick long range strikes, the latter bouncing in front of the ’keeper before he controlled it – but they failed to capitalise on a good start made through a hard-working midfield.

Rangers survived a real scare on 17 minutes, when Niall Andrews lent his strength to the attack. Controlling Ben Hickey’s long throw-in on the edge of the six-yard box Andrews swivelled and shrugged off his man, but he couldn’t direct his low shot inside the far post.

Rangers failed to learn the lesson from that miss as, two minutes later, Evergreen struck from the same type of attack. Again, Hickey launched a booming throw into the box from the right. Again, his intended target was Andrews.

This time they mixed things up a little. Andrews flicked the ball on, aiming a header towards the back post, where Jason Quan was waiting to tuck a low shot away under the diving Gavin Griffiths.

Evergreen were full value for the lead, but didn’t get to enjoy it for long. Gorey, who moved the ball patiently through a well-oiled midfield, took just seven minutes to hit a reply. With Stephen Kinsella and Jamie Howard moving the ball well in the middle, play was fed by Mark Woods out to the right. Glen O’Brien was on it in a flash, whipping in a menacing ball for skipper Joe Bolger to attack with a powerful header that rocketed to the net.

Gorey were determined to build on that goal, but Evergreen didn’t let them settle. Within 60 seconds, they pulled the rug from under their hosts – and how.

Going on the attack from kick-off, Evergreen quickly turned the game their way again. Ben Hickey, who had great joy all day on the right, cut Rangers open with a dangerous diagonal ball towards the box. Quan did well to control it, and retain possession when it seemed he had lost it.

What followed was even better. Turning his man, Quan took a quick look at the target and unleashed a stinging drive that screamed all the way to the top right corner of the Gorey net.

It was an excellent response from Evergreen, but they weren’t about to let up. The visitors kept on the offensive (they had a penalty appeal waved away, while Simon Burke also lashed a 33rd minute half-volley over the bar) before their dominance paid off with a third goal.

With Gorey trying to play a high defensive line, Evergreen saw their chance and took it. Dylan Whearty drilled a peach of a long ball from the back towards Sean Barcoe, who stepped forward at just the right time. Splitting the central defenders, Barcoe controlled the ball with a deft touch, then muscled his way into space before firing home from the edge of the box.

They were two goals to the good now, but still Evergreen wanted more. Barcoe was denied a second by a fine save from Griffiths, who stuck out his right foot to deny the midfielder from close range two minutes before half-time. His defence came to his aid from the resulting corner, as a mass of red and black shirts swarmed in to block Burke’s shot.

They started the second half in a similar vein, taking just seven minutes to breach the Rangers rearguard again.

Working the ball around with patience, defender Oisin Corr turned playmaker with a clever ball into space in the middle. Sean Barcoe seized possession, then quickly clipped a low ball through the gap. Darragh Walshe sprang the offside trap and sprinted through, pausing only to tuck the ball home.

That goal deflated Gorey, who really struggled to break Evergreen’s stranglehold on midfield. It got worse for Rangers when they conceded a fifth with 18 minutes left on the clock.

Like some of their other goals, speed and strength played a big part in this strike. Sent on his way by Jamie Owens, Ben Hickey stormed up the left wing and fired in a low cross. Brian Jordan read the move and reacted, rushing to the near post before applying the cool finish that sealed Evergreen’s semi-final berth.