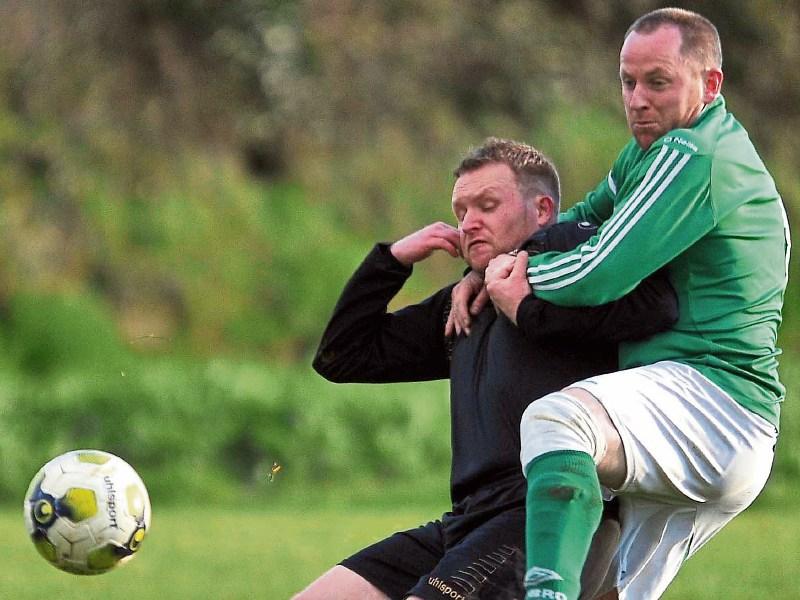 It took patience, a little nerve - and a great finish! - but Fort Rangers finally fought their way into the quarter-finals of the McCalmont Cup.

Emmet Nugent was the driving force, his second half goal proving enough to undo the efforts of Freshford Town in an entertaining Saturday evening battle in Wallslough.

Nugent’s 66th minute strike was the difference between the sides in a game which could so easily have gone either way.

Freshford had been piling on the pressure - James Kavanagh gave Fort a fright when he floated in a free-kick which a static defence watched go flashing past the target - when all of a sudden they were caught out.

Right after that Kavanagh free, Fort scored. David Buggy’s kick-out was flicked on by Conor Bergin towards Tony Moran. His quick diagonal release was seized upon by the onrushing Nugent, who held off his marker to coolly slide the ball beyond netminder Paul Buggy.

The goal came as something of a relief for Rangers side who had their hands full with a bustling Freshford side for long spells.

The hosts went looking for an early goal to try and make the game theirs, but found instead they had to focus on their defensive work. Netminder David Buggy was called into action after 13 minutes, when Ethan Hayes intercepted a Rangers throw-in and flicked the ball on to Robbie Dowling, but Buggy got down smartly to parry the dangerous shot out before scrambling to his feet to gather the rebound.

He had more work to do before the half hour. Freshford, despite their relegation from the Premier Division, were intent to end their season on a high. They almost went some way towards doing that when Ollie Kenny and Gerry Doheny teamed up well on the right and fed Jonathan Doheny to have a crack.

Given time to pick his spot Doheny let fly with a rocket strike from the edge of the box, but Buggy sprang up to brilliantly tip the ball away from the top right corner.

That was the scare that Fort needed to shake themselves into gear. Pushing on they got to grips with the game across midfield which, in turn, gave them more chances in attack.

Emmet Nugent could and should have given his side the lead when he picked up Tony Moran’s raking diagonal pass and bore down on goal on 42 minutes, but Paul Buggy raced from his line and spread himself to make the save.

Fort had another pop at breaking the deadlock in the dying seconds of the half after a Moran corner was only half-cleared. Conor Bergin did well to force the ball back into the mix – it fell just right for Eddie Nugent, who steered the ball beyond Paul Buggy, but teenage defender Ben Tallis was there on the line to make a vital save.

The hosts were first to go on the offensive after the restart - but still they couldn’t find a way through. Tony Moran went close - really, really close - when he chested down Liam Forristal’s long pass.

Spinning his marker on the edge of the box Moran unleashed a thunderous drive that screamed towards the inside of the far right post, but the ball clattered off the frame of the goal and flew away to safety.

Back came Freshford. Determined not to fade out of the game they turned things their way in attack, but found David Buggy in unbeatable form.

The Fort netminder did well to keep Conor Madden’s 61st minute snapshot out, diving to his left to stop the ball. He was called into action again just a few minutes later, getting his fingertips to a searing Daithi Burke strike and forcing it over the bar.

Freshford had another bite at the cherry from the resulting corner. They should have taken the lead when Graeme O’Flaherty headed Jonathan Doheny’s corner back across goal and towards Gerry Doheny.

He stretched his leg out to meet the ball, but couldn’t stop his shot from soaring over the bar.

That was a huge let-off for Fort, but their nerves were settled when Emmet Nugent fired them in front little over a minute later.

The goal took the sting out of Freshford’s charge. They pressed and pushed for an equaliser, but Fort were in no mood to cough up their quarter-final berth.

The last eight teams are now known in this year’s McCalmont Cup. Newpark A made it through on Friday evening thanks to a 4-1 win over Brookville. Jason Delaney (2), Henry O’Neill and Bart Jubezyk hit the net for the city side, who earned a home draw against Premier Division rivals Evergreen B.

Callan United A were given a walkover by East End United. Callan B conceded their game to Freebooters A.