Kirsty a late Maher-vel for Evergreen! 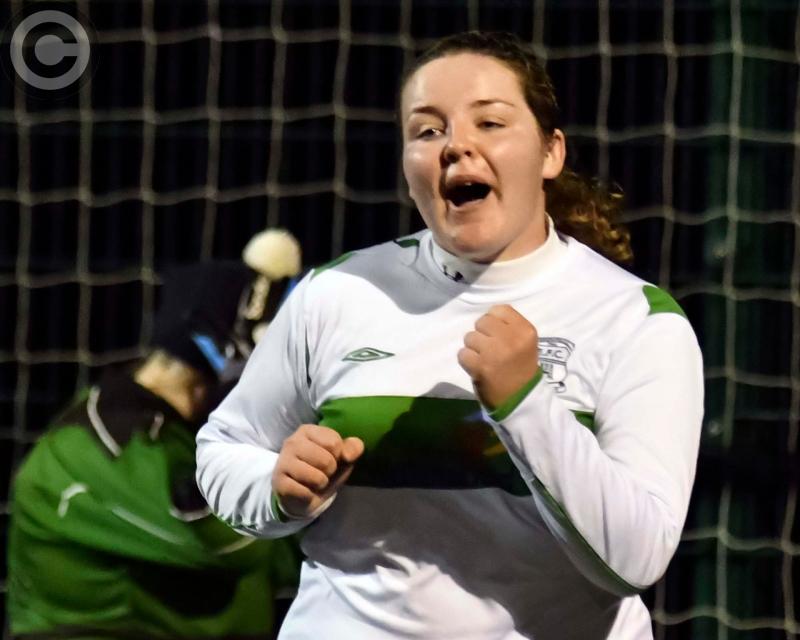 Kirsty Maher was the toast of Evergreen as her last-gasp goal snatched the Women’s Shield spoils from under the noses of Thomastown United.
Maher was the jewel in the crown for the city club, showing a great touch and impressive awareness as she played a major role in the club retaining their title at a chilly Derdimus on Saturday evening.
The women’s game has been dealt a few blows in recent years – the absence of a full-sized league has meant clubs have departed to other counties, while the league’s representative side is on hiatus - but there are still players willing to pick up the fight and carry on.
The current competition, a seven a-side league, has kept the sport in focus in Kilkenny, with Derdimus and Clover United’s Rathdowney grounds proving to be regular haunts for teams on Saturday evenings.
Evergreen, one of the big names in the smaller-sized game in recent years, continued their winning ways at the weekend but had to work hard for the spoils. Twice they had to come from behind to halt a confident Thomastown side before sealing the win with virtually the last action of the game.
The decisive goal, when it came, was worth waiting for. Latching on to Aine Fennelly’s throw-in Kirsty Maher controlled the ball and unleashed a stinging shot from the edge of the box.
United goalkeeper Gabby Durack made a fine instinctive save, pushing the ball on to the crossbar, but she couldn’t stop Maher from seizing on the rebound. Keeping cool, she threw the ’keeper with a little shimmy, then calmly picked her spot in the back of the net.
The strong finish mirrored the start Evergreen made to the game – once it started, as a heavy hail shower delayed proceedings. Maher and Leah Treacy had quick shooting chances, the former bringing a good save from Durack, but neither could break the deadlock.
Thomastown were quiet at the start, but once they grew into the game they showed their attacking teeth. They went within a whisker of taking the lead when Megan Hayes whipped a ninth minute ball across the box, but Shauna Carroll was a hair’s breadth away from connecting.
Carroll was the provider for the next chance a few minutes later, cutting Evergreen open with a peach of a diagonal ball. Caroline Holden seized possession but shot first time - a touch would have given her a chance to properly pick her spot.
With the shorter pitch making for a fast game it didn’t take Evergreen long to hit back. Maher brought another good save from Durack but, minutes later, they were stunned as United took the lead. 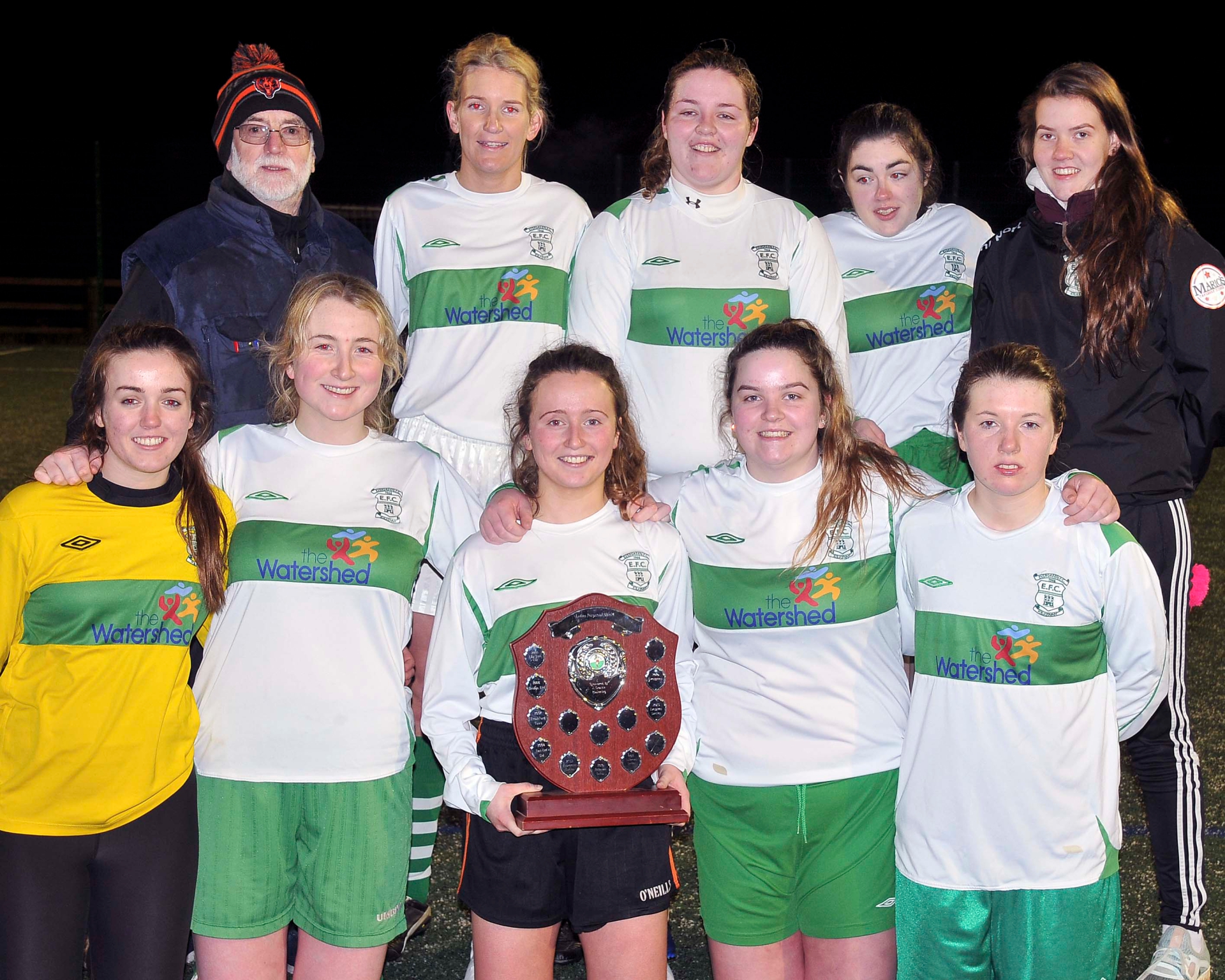 Evergreen - Women's Shield champions, 2016. Photo: Michael Brophy
Driving forward, Thomastown made the breakthrough when Caroline Holden took play into the Evergreen half. Her 14th minute pass was picked up by Niamh Whelan, who slipped Megan Hayes through to fire past netminder Laura Tynan.
United didn’t get to enjoy their lead for long. It lasted just two minutes, as Maher cleverly shot Evergreen level.
Awarded a free for a handball on the left side of the box Maher shaped as if to fire a high drive towards the right but, instead, skimmed a daisy-cutter of a low shot around the left side of the wall and beyond Durack’s reach.
Thomastown didn’t hang about in firing off a response and stormed back in front a further four minutes later. Persistence paid off as Hayes chased down a high Carroll ball. Her efforts were rewarded as Tynan hesitated leaving her line, giving Hayes time to nip in and nick the ball away before diverting it to the net.
The sides continued to forage for more goals. Sonia Buggy brought a top class save from Durack, who clawed her 25th minute header out of the top right corner and over the bar, while Hayes was denied her hat-trick by a fine stop from Tynan.
However, it was honours even when Evergreen hit the target two minutes from half-time. Sinead Corrigan did well to control Maher’s headed on pass with her back to goal, then sharply turned her marker before drilling a low shot into the bottom right corner.
The second half was a tamer affair. Both sides adopted a cagier approach to the game, waiting to see if their opponent would make a mistake they could capitalise on.
Shauna Carroll was first to test the nerve of the opposing goalkeeper, sending a 37th minute free-kick whistling wide of the target. At the other end, Sinead Corrigan floated in a corner for Sonia Buggy to attack, but her 40th minute header flashed over.
The sides continued to look for goals - Corrigan was denied another strike by a superb block from Rachel O’Carroll - but with time ticking down the stalemate couldn’t be broken.
It looked like both sides were gearing up for extra-time and possibly penalties. However, no-one told that to Kirsty Maher.
Evergreen: Laura Tynan, Aine Fennelly, Kirsty Maher, Jennifer O’Keeffe, Leah Treacy, Sinead Corrigan, Danielle Kenny, Sonia Buggy.
Thomastown United: Gabby Durack, Linda Minogue, Rachel O’Carroll, Caroline Holden, Niamh Whelan, Megan Hayes, Shauna Carroll, Suzanne Walsh, Michelle Conway, Rebecca McCarthy, Kate Solotysek, Ailish O’Shea, Niamh Costigan.
Referee: Paul Hunston.