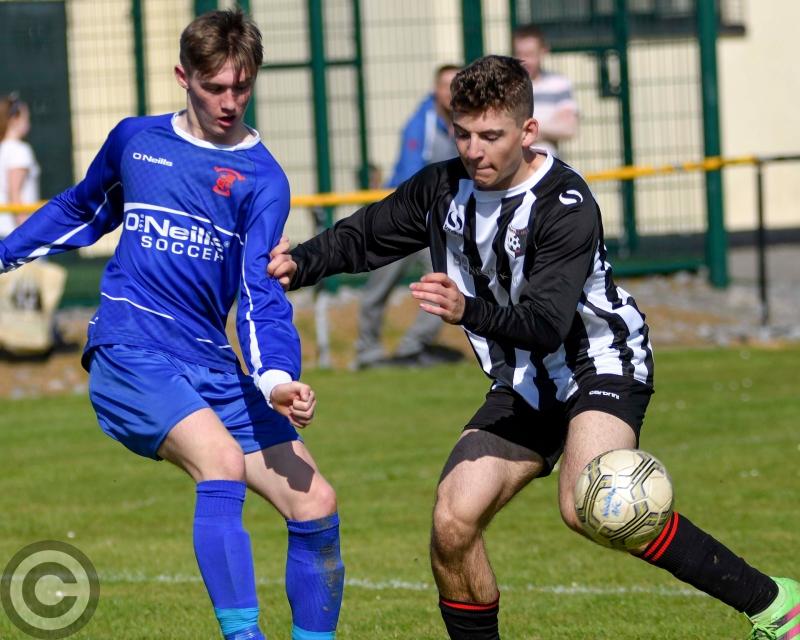 Andy Walsh stole the show as his barnstorming performance earned Freebooters the Henderson Youths’ Shield title.
A devastating hat-trick, picked off in 18 impressive minutes, was the tale of the tape as the Blues delivered a quick knockout to city rivals Newpark.
Walsh struck early and swiftly as the James and Shane Kelly-led ’Booters quickly stamped their authority on a glorious Saturday afternoon.
Playing in a side packed with composed and skilful players, it took Walsh just seven minutes to open his and Freebooters’ account. Some wonderful link-up play between top two Sean Bolger and Gavin Walsh constructed an opening for Walsh, who raced from midfield and sprinted through a gap in the Newpark defence before slipping the ball beyond netminder Ryan Poyntz’s reach.
Spurred on by that goal, Freebooters kept playing at a quick tempo and soon added a second. There was an element of good fortune in the build-up, as Ethan Butler’s diagonal pass broke off Gavin Walsh and fell into Andy Walsh’s path, but there was nothing fortuitous about the finish.
Walsh had gambled that the ball might break his way; taking the risk paid off, as rushed into confidently sidefoot the ball into the bottom right corner of the Newpark net.
Newpark were rattled by that quick brace, but raised their game as they fought for a way back into the final. An off-balance Jack Smith saw his close range strike fly over the bar on 18 minutes, while goalkeeper Steven Scallan had to move smartly to gather Fred Odera’s dangerous 22nd minute cross before the incoming Lee McEnroe could ram it home. 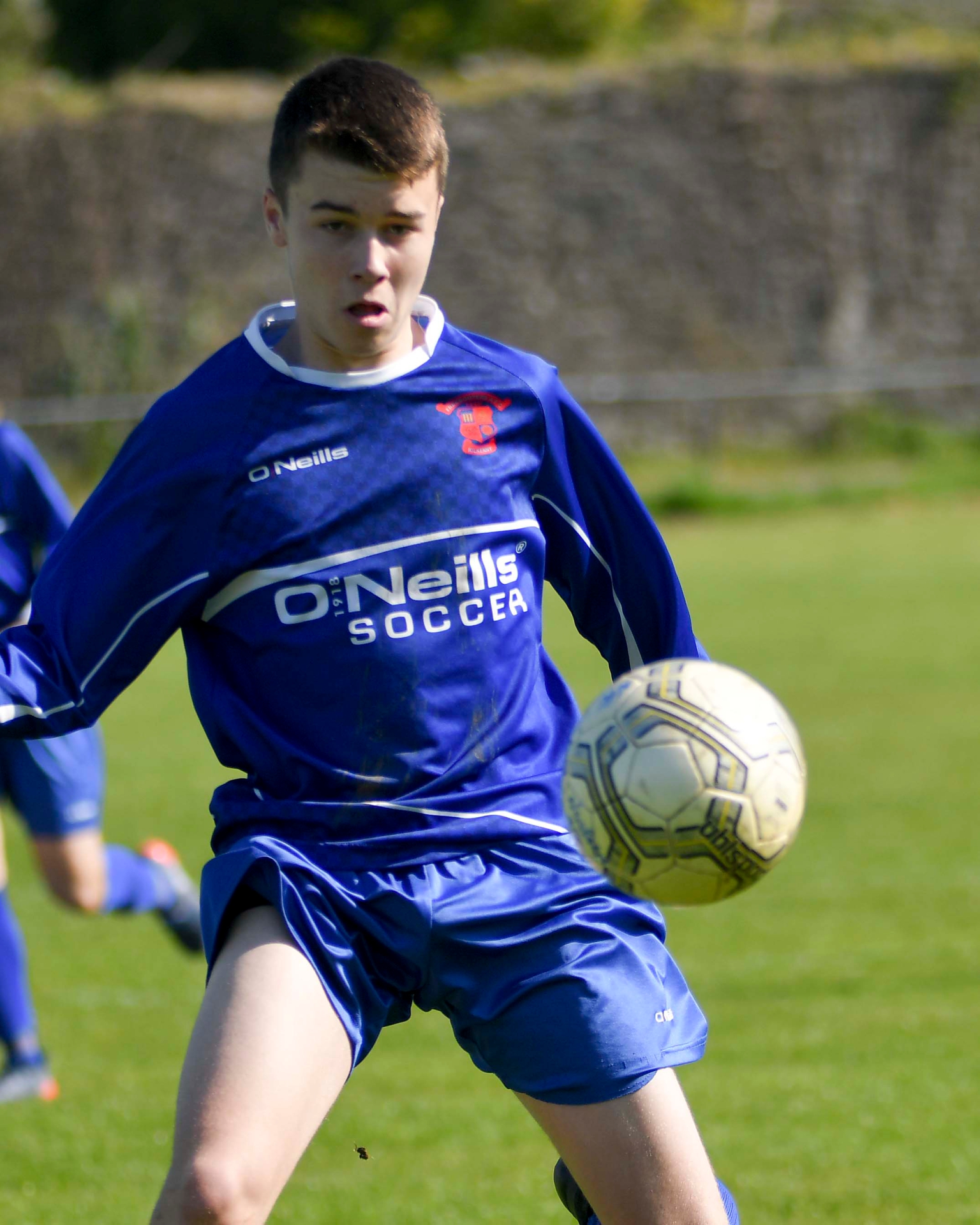 The boys in black and white had been battling their way back into the game, but their charge faltered when Walsh grabbed his and Freebooters’ third midway through the half, coolly converting a penalty after Butler had been tripped in the box.
The Blues were hungry for more goals and kept looking for ways to add to their lead. They nearly bagged a fourth goal on 36 minutes, Bolger sprinting on to a perfectly-weighted pass from Jack Smith, but Luke Freyne was there with a well-timed tackle to nick the ball away.
Even with a sizeable lead Freebooters continued to force the pace in the second half. With Smith, Bolger and the tricky Joe Banville leading the way, not to mention an imposing performance from a defence which included the bustling Tervine Wallace, at times they forced Newpark to defend deeply.
Newpark were no slouches in the game; they had fine performances from the likes of Ian Clifford and Fred Odera, but they couldn’t impose themselves fully on the game.
They were grateful to goalkeeper Ryan Poyntz in that second half, with the netminder coming to his side’s rescue on several occasions. He raced from his line to clear a through ball before Andy Walsh could pounce in the 51st minute.
Superb Double Save
Poyntz followed that up with a superb double save seven minutes later, staying big to beat out Andy Walsh’s close range shot before scrambling to his feet in time to deal with Sean Bolger’s strike from the rebound.
The ’keeper was called into action again either side of the hour mark. He had to look lively to stop another Andy Walsh effort from inside the six-yard box and survived a scare when Gavin Walsh rattled the crossbar before saving his best save for his next effort, diving full stretch to his left to push Chris Phelan’s menacing 63rd minute free-kick to safety.
There was little, however, that Poyntz could do to prevent Freebooters from wrapping up the title with 25 minutes left to play.
Sean Bolger was the architect, arching his body in such a way to find the perfect angle for a pass to Andy Walsh. His delivery was just as good, as he slipped the ball through for Gavin Walsh to race on to. His first shot was blocked by Poyntz, but Walsh pressed on to squeeze the rebound home from the narrowest of angles.
That fourth goal finally broke Newpark’s resolve. Things could have gotten a lot worse, but sub Marco Pesce rescued his side with two goal line clearances late on.
The misses mattered little for the Blues, who comfortably held court until the final whistle confirmed their impressive win.
Freebooters: Steven Scallon; Charlie Deegan, Chris Phelan, Killian Duffy (Divine Amaukwu, 61 mins), Tervine Wallace (Karl Conlon, 61 mins); Ethan Butler (Zen Hamed, 76 mins), Andy Walsh (Liam Brennan-Smyth, 80 mins), Jack Smith, Joe Banville; Sean Bolger, Gavin Walsh (Owen Dowling, 69 mins).
Newpark: Ryan Poyntz; Luke Freyne, Sam O’Dwyer (Harry Jordan, 39 mins), Jack Smith, Dion Conroy (Marco Pesce, 72 mins); Eoghan Ryan; Erick Ayat, Glod Landu, Ian Clifford (Fintan O’Sullivan, 87 mins), Fred Odera (Kasper Mazurkiewicz, 64 mins); Lee McEnroe (Jay Meagher, 80 mins).
Referee: David Cummins. Assistants: James Nolan, Eoin Walsh.